Heroin is synthetically processed from the morphine alkaloid contents of opium and like the differing potency and processing methods of heroin, so is the individual’s elimination period of the drug.

Heroin can be snorted, smoked, or injected intravenously and produces a euphoric “rush” followed by comforting symptoms of warmth, pleasure, calmness, and analgesia. Because heroin has a short half-life that elicits a powerful euphoria, you may begin using heroin occasionally, but, turn to daily use as your tolerance increases and your system becomes adapted to its presence.

The half life of heroin, itself, is very limited because of its immediate conversion to morphine which has half-life of about 6 hours. As the morphine continues to metabolize, the quarter-life’s decay curve is estimated about 12 hours, and after 18 hours an estimated 1/8 will remain and then 1/16 and so on and so on.

Factors Contributing to the Time Heroin Stays in Your System

Heroin contains several metabolites that can distinguish its use from morphine and other opioid drugs. Some heroin, such as black tar heroin, contains more of these metabolites than other heroin sources, altering the effects of the heroin dose as well as its elimination periods.

Other contributing factors to heroin’s elimination from your system may include the amount of heroin used and methods of use, your physical health status, metabolizing rates, weight, height, and other biological aspects. If you are a chronic user of heroin, use it frequently, or use high doses, the time it takes to get specific the heroin out of your system can be considerably longer than any standard ranges. 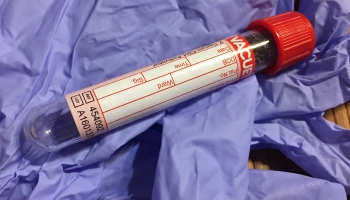 Heroin can be detected in the blood up to 12 hours after use.

Several tests have been approved by the FDA to detect heroin use in the urine, blood, saliva, and hair. It can be detected up to 6-12 hours after use in the blood plasma levels and the slower eliminations in the urine are commonly detectable up to 2-4 days after use. For chronic users this can be up to seven days.

Saliva tests are also available with the detection ranges averaging from 1-4 days. The longest detection capabilities are in the hair follicles and the ranges for heroin detection can be up to 90 days through these tests.

Then again, the reliance on heroin detection tests should not be construed with actual heroin in your system. They are clinical measures that can yield a negative or positive result based on a number of other issues including other substances in your system.

Heroin dependence requires continued use for normal physiological functions and over time, you will need more of the drug to elicit the desired effects. The short half-life of heroin lasts around 1-2 minutes before being converted to morphine and certain metabolites in the heroin can dramatically increase the euphoria. The greater the euphoria, the more you will crave heroin because scientific evidence proves that these brain reactions contribute to reinforcement of those addictive behaviors.

As the converted morphine remains active in your system it will continue producing the calmness and other pleasant effects desired from heroin use. Your physical, psychological, and social stabilities will, gradually, decline, making it more difficult to stop using heroin and necessary to avoid withdrawals. It safe to say, the longer you use heroin, the more you use it, and other dangerous patterns of use are determining factors to the time it will take to clear from your system.

Your physical health has tremendous influence on how long heroin stays in your system. Many heroin users engage in the dangerous behaviors of IV use, needle sharing, using contaminated needles, poor hygiene, unsafe sex, disregarding their health and safety.

Upon dependence, heroin becomes all the more powerful because it becomes the recognizable relief for any environmental pressures, emotional upsets such as stress, guilt, or shame, and the adjustment remedy for any physical ailments. For a chronic heroin addict, it can become their primary source of survival surpassing health, family, shelter, and other needs which add to the risk of deteriorated health and ultimately the ability to clear heroin from the system.

According to the Substance Abuse and Mental Health Services Administration, “Some medical problems are more prevalent and often more severe in people addicted to opioids than in the general population. Many are infections, including some that can be acutely life threatening, such as cellulitis, wound botulism, necrotizing fasciitis, and endocarditis. Diseases that are transmissible pose serious public health threats and are life-threatening, such as HIV/AIDS, hepatitis, syphilis, and tuberculosis (TB).”

Heroin contains variant chemicals from the original opium source and those used during processing with every dose being unpredictable in the substances that have been used to increase quantities through the distribution chains. The increased exposure to these chemicals and the introduction of bacteria into the bloodstream along with continuous disruptions to physiological process in the brain and central nervous system can alter many internal systems and damage vital organs.

Often heroin users are also poly-substance users and the combination of heroin with alcohol or other drugs exponentially increases the risk of health damages altering metabolism, vital organ functions, and the elimination of bodily wastes.

Hazardous Heroin Effects on the Body 5 Things You Shouldn’t Say to Your Brother If He’s Addicted to Heroin 13 Unmistakable Signs You Need Help for Heroin Addiction Consequences of Heroin Abuse What are the Effects of Heroin?