A Day In The Life

Across the U.S., the number of people dying from drug abuse and overdose is rising faster than ever before. While the most popular or commonly abused substances have been fluctuating over the years, heroin has seen a 533 percent increase in deaths since 2002.

You may know the stats, the numbers, and even the drugs – but do you know the people?

In reality, there is no one face to drug abuse. From the young to the elderly, the successful to the struggling, anyone can suffer from the deadly grip of addiction. To help shed some light on the impact drug abuse is having on Americans across the country, we asked people struggling with addiction to tell us more about their history with drugs and about themselves. From the types of jobs they have and the food they eat for breakfast to the amount of money they spend on their drug habits. Read on to see what we uncovered. 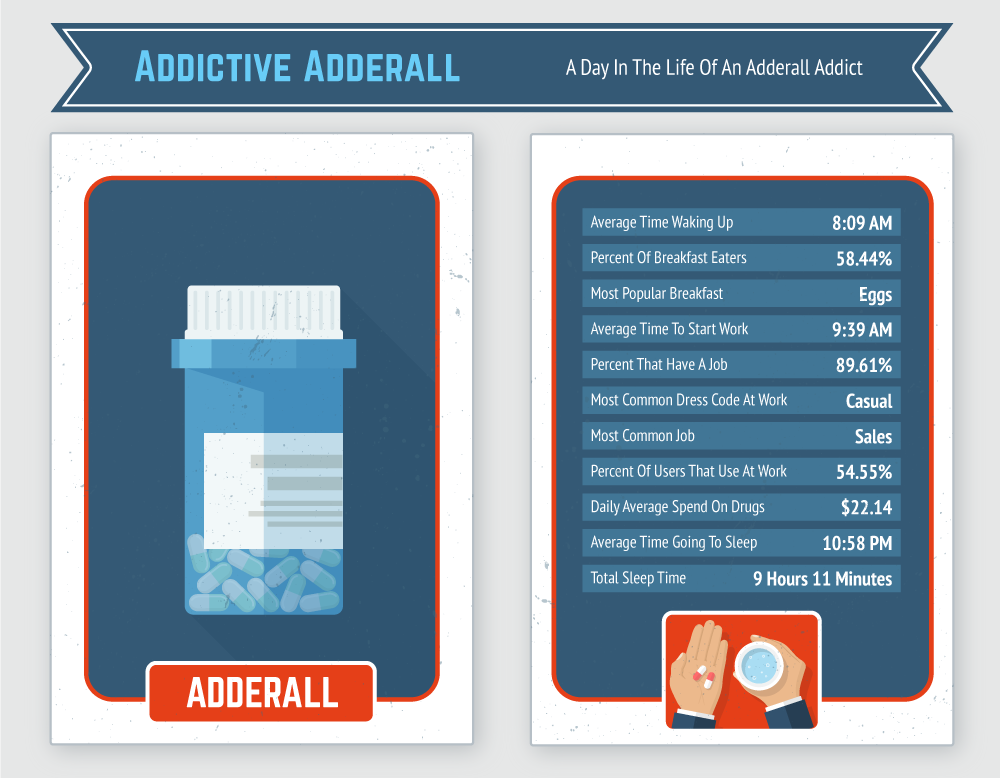 Many of the most deadly and addictive drugs Americans struggle with are illegal – but not all of them.

Adderall, a stimulant typically used to treat attention deficit disorders, isn’t a new substance. Introduced in the ‘20s, scientists have been finding new ways to apply Adderall (and its derivatives) to medical conditions for decades. In 2015, the FDA approved the use of a similar stimulant (Vyvanse) to treat a binge eating disorder which the drug manufacturers themselves spent money to market. For millions of Americans (including children, teenagers, and adults), the overprescription and availability of Adderall has left them dependent on stimulants to function and struggling to break free.

So who are they? You might not know just by looking at them, but they usually wake up just after 8 a.m., typically work in sales, and more than half say they take Adderall on the job. They told us they’re usually in bed before 11 p.m. and that they spend just over $22 a day to fuel their addiction to Adderall. For those looking to wean themselves off, quitting Adderall isn’t as simple as going cold turkey. Even low continuous doses can cause a person to crash during withdrawal leading to panic attacks, anxiety, depression, and thoughts of suicide. 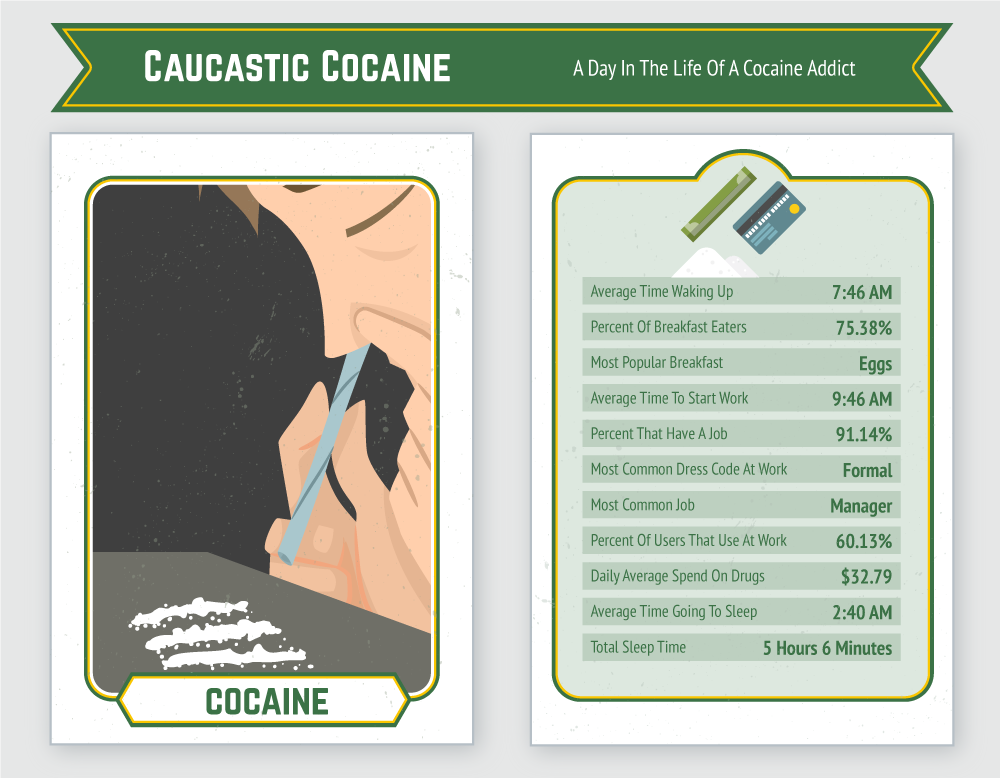 The United States has a long history of cocaine use. As far back as the 1890s, you could buy a syringe of cocaine from Sears for $1.50 for either medical or recreational use. Not until 1914 did the U.S. finally start regulating the production and sale of opiates and cocaine, effectively outlawing them. In the ‘70s and ‘80s when the War on Drugs and campaigns like “Just Say No” started taking root, both crack and powdered cocaine were front and center as the face of an epidemic ravaging the country.

While the number of people dying from cocaine overdoses has decreased since 2006, the number of people trying cocaine for the first time is rising exponentially. This deadly substance doesn’t care if you’re addicted or just experimenting – it treats everyone the same. In 2014, more than 5,800 Americans lost their lives as a result of cocaine use and overdose.

Despite the dangerous and addictive nature of cocaine, you might have more in common with the people who’ve become addicted to the substance than you think. More than three in four people we surveyed struggling with cocaine misuse told us they prefer to eat eggs for breakfast, and more than 91 percent were employed. We found that the average job title in the U.S. of someone addicted to cocaine was a manager, and nearly two in three told us they used cocaine even while they were at work. We found that Americans who admitted to being addicted to cocaine spent nearly $33 on average every day on the drug. 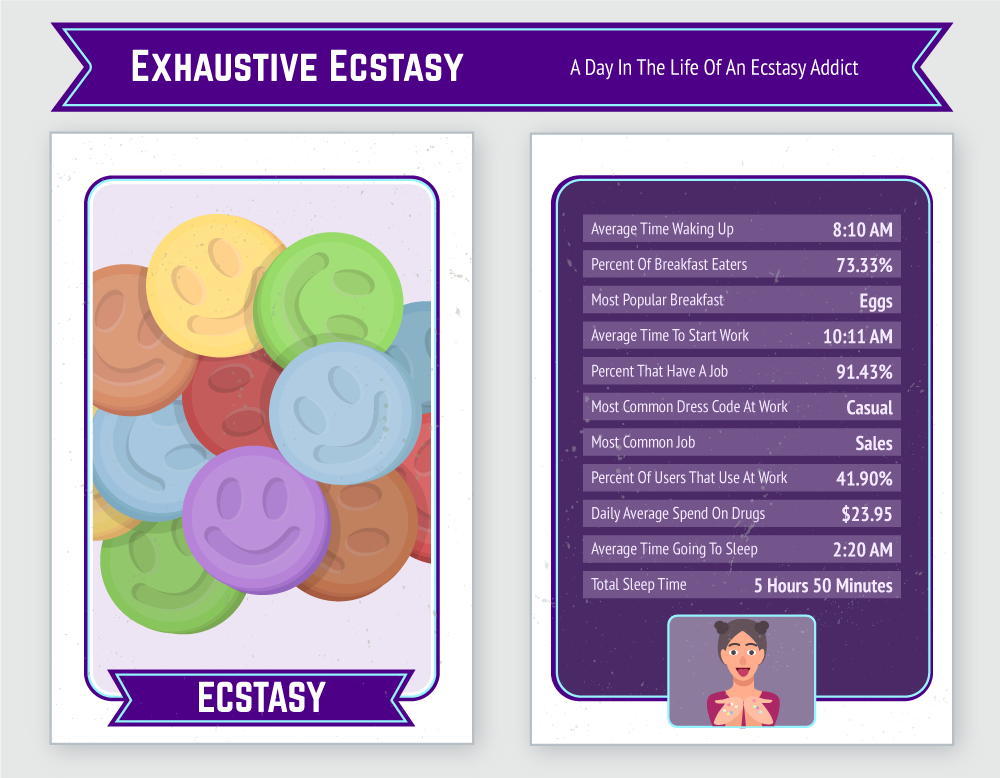 In 2014, the National Survey on Drug Use and Health (NSDUH) revealed that more than 17 million Americans as young as 12 years old admitted to trying MDMA (ecstasy) at least once in their lives. That number was up by 11 million just over a decade prior. Ecstasy may commonly be referred to as a “party drug”, but the effects of MDMA use can include feeling detached from oneself, decline in cognitive function, depression, heart disease, and is often characterized by binge consumption.

Even though ecstasy is commonly associated with music festivals and parties, more than two in five Americans we polled who admitted to being addicted to ecstasy acknowledged using the drug at work. More than 91 percent were employed, and the average profession involved sales and casual work attire. On average, they told us they spent nearly $24 a day on ecstasy and slept less than six hours each night. For many, drug abuse can lead to sleep deprivation and chronic insomnia. Even withdrawal from drugs can have a negative impact on a person’s sleeping pattern and it can take up to six months to return to normal. 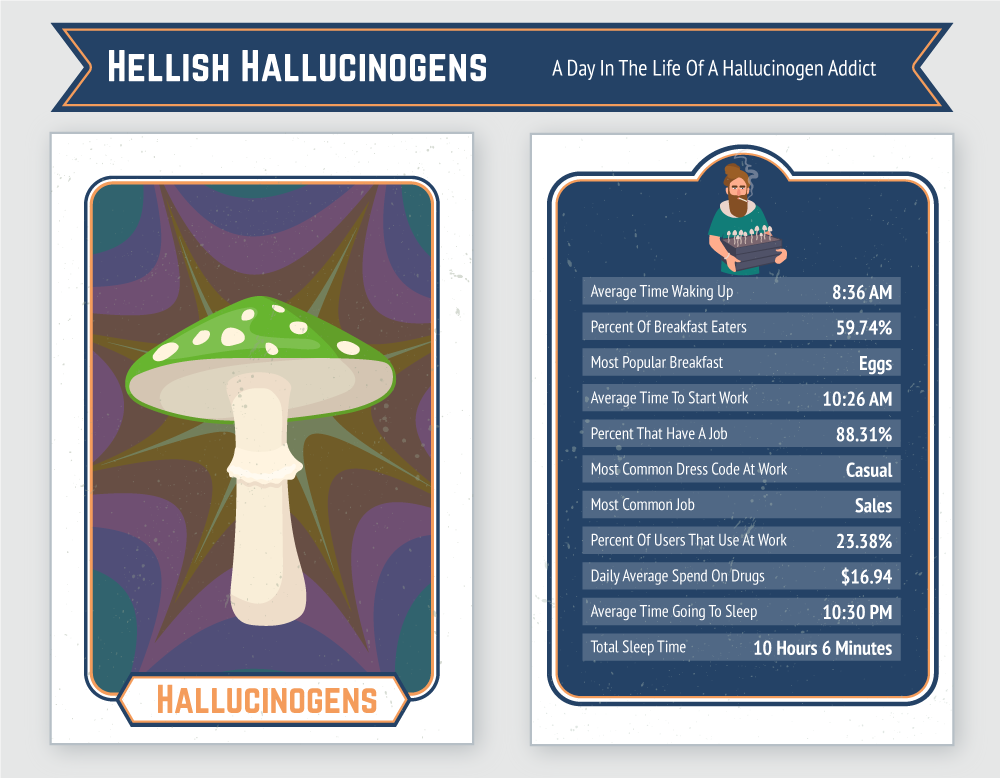 Imagine being out with friends or at a  party and losing the ability to tell the time correctly. Maybe you’re in a familiar place, or somewhere entirely new but have no control over the thoughts and emotions rushing through your body. You could feel happy one second and terrifyingly anxious the next. You might start to see things that aren’t actually there and question the reality of things that are. Despite the classification of hallucinogens as a recreational substance, drugs like LSD, peyote, and DMT can have far-reaching physical and mental side effects. Prolonged use of LSD can cause a tolerance to form, and result in mood shifts, paranoia, and the effects of strokes or brain tumors.
You might not immediately recognize all of the characteristics of a person addicted to hallucinogens from the outside. According to the Americans we polled, more than 88 percent were employed and their average start time at work was just before 10:30 a.m. Their average sleep time was far above the amount recommended by the CDC, clocking more than 10 hours each night. Like people addicted to ecstasy, they typically worked in sales and nearly one in four admitted to using hallucinogens on the job. 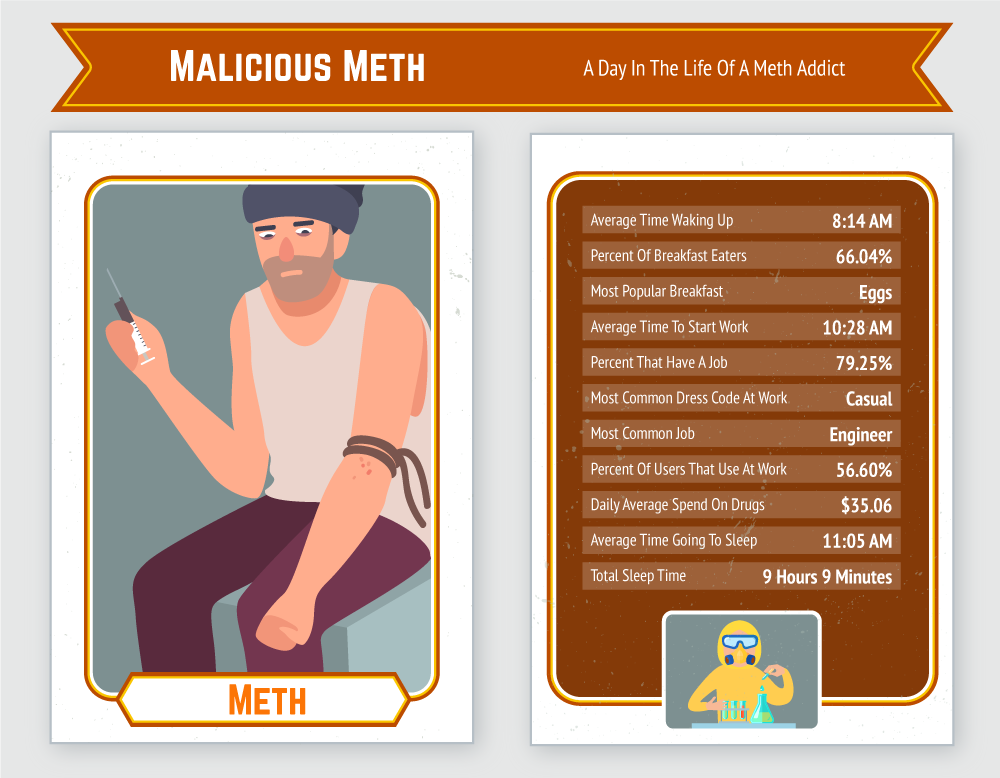 The television show “Breaking Bad” may have been a fictionalized portrayal of the effects of meth, but the real-life impact of meth in America seems up for debate. More than 13 million people across the country (that’s four percent of the U.S. population) have tried it at least once, and no drug is more likely to be linked with violent crimes and property damage. Despite the growing reality of those numbers, some analysts still don’t understand the far-reaching impact of meth in America. More than 7,600 people lost their lives as a result of methamphetamine overdose in 2016, a number that’s risen every year since 2008.

Even though Americans addicted to meth spend more every day on their drug use (over $35) and over half admitted to using methamphetamine on the job, they were less likely to be employed than some other Americans with drug habits we surveyed. One of the most dangerous consequences of long-term methamphetamine use is an addiction which can lead to compulsive drug seeking and reduced cognitive capacities. Less than 80 percent were employed at the time of our poll, though we found the average job type was an engineer. People addicted to meth also enjoyed eating eggs for breakfast and typically reported to work before 10:30 a.m. 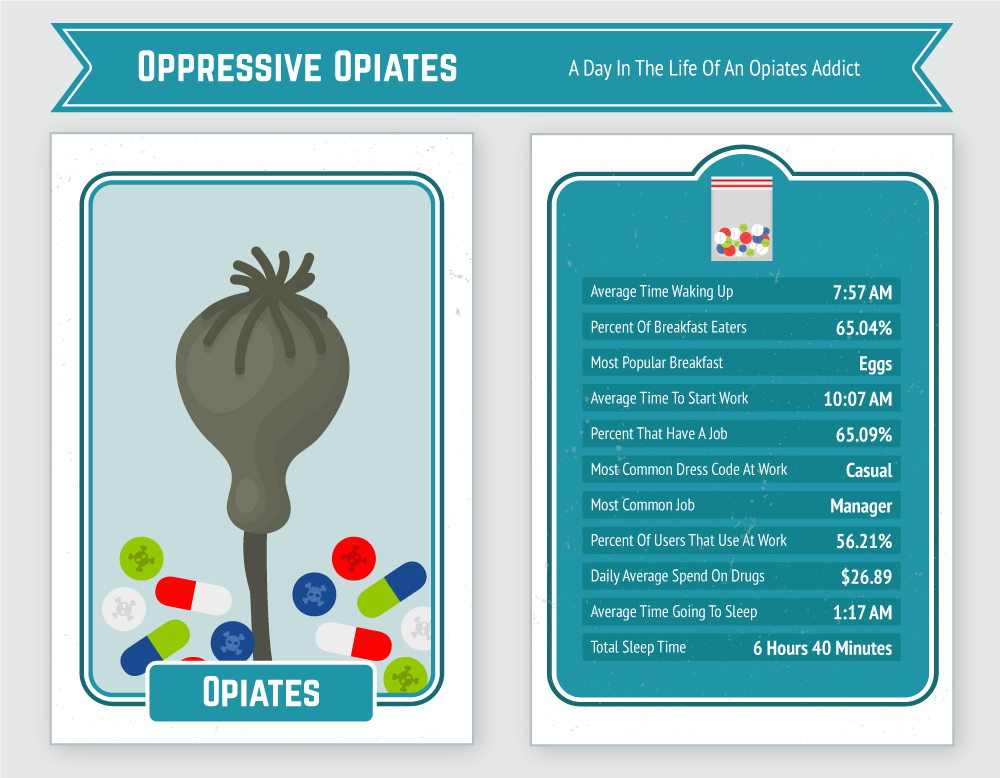 The True Face Of The Opioid Epidemic

Of all the illicit substances contributing to the increasing number of drug-related overdoses in America today, none are more dangerous or deadly than opiates. More than 20,000 people died in 2016 from synthetic opioids like fentanyl, and heroin alone claimed over 15,000 lives the same year. Like other drugs that have infected American communities in recent years and wreaked havoc on the lives of millions of people across the country, there seems to be no true discernible pattern among who might be impacted by opioid addiction today. Parents can be just as likely as their children to experience its impact and just as likely to be killed by using it.

If you think you know what a person addicted to opioids like heroin looks like, think again. Nearly two in three that we polled were employed, and the average user spent just under $27 a day acquiring drugs. They typically dressed casually for work, and the most common job type was a manager. They told us they slept just under the recommended number of hours, but more than 65 percent said they made sure to have breakfast before leaving home in the morning and generally preferred to eat eggs.

At the heart of addiction isn’t the stereotype of an American on drugs. It isn’t a person without morals or self-discipline. It isn’t a person who doesn’t want to work or who only cares about getting high. The reality is that addiction is a chronic disease and can affect anyone we know or love. The compulsive drug seeking urges that dictate addiction literally impact the brain and reduce a person’s ability to resist urges and make quality decisions. Like anyone else, many of the people we surveyed who admitted to drug abuse also told us they got up in the morning, ate breakfast, and got ready for their work days.

If you or someone you love is battling drug addiction today, help is here for you. Addiction isn’t the same for everyone, and overcoming drug abuse means finding a treatment that’s customized for your situation. At Addictions.com, our mission is to help you break the cycle of addiction with our on-call health professionals, rehab recommendations and reviews, and treatment options that are built for you. You are not alone and help starts here. Visit us online at Addicitions.com today to learn more.

We surveyed 1057 people who reported using drugs. These people chose to participate in the survey openly. The only qualifier was that the people surveyed had use drugs. Marijuana was left out due to some of the states legalizing Marijuana.