Across the U.S., fewer Americans today identify with or practice a religion of any kind. At the same time, the public perception of drugs like marijuana and illicit drug use is on the rise. But is there really a connection between the two?

In 2014, the number of Americans who described themselves as religiously affiliated fell to 77 percent, an all-time low. Today, 61 percent or more also believe marijuana should be legal in the U.S. – which means there could be some overlap among Americans who feel connected to religion and comfortable with recreational drug use.

To better understand the correlation between the religious perspectives of Americans and how those beliefs might impact their opinion on drugs or even their own drug use, we polled men and women across the country for their opinions. Curious which religion told us they consumed the most illicit substances or who was showing up to worship under the influence? Read on to see what we discovered. 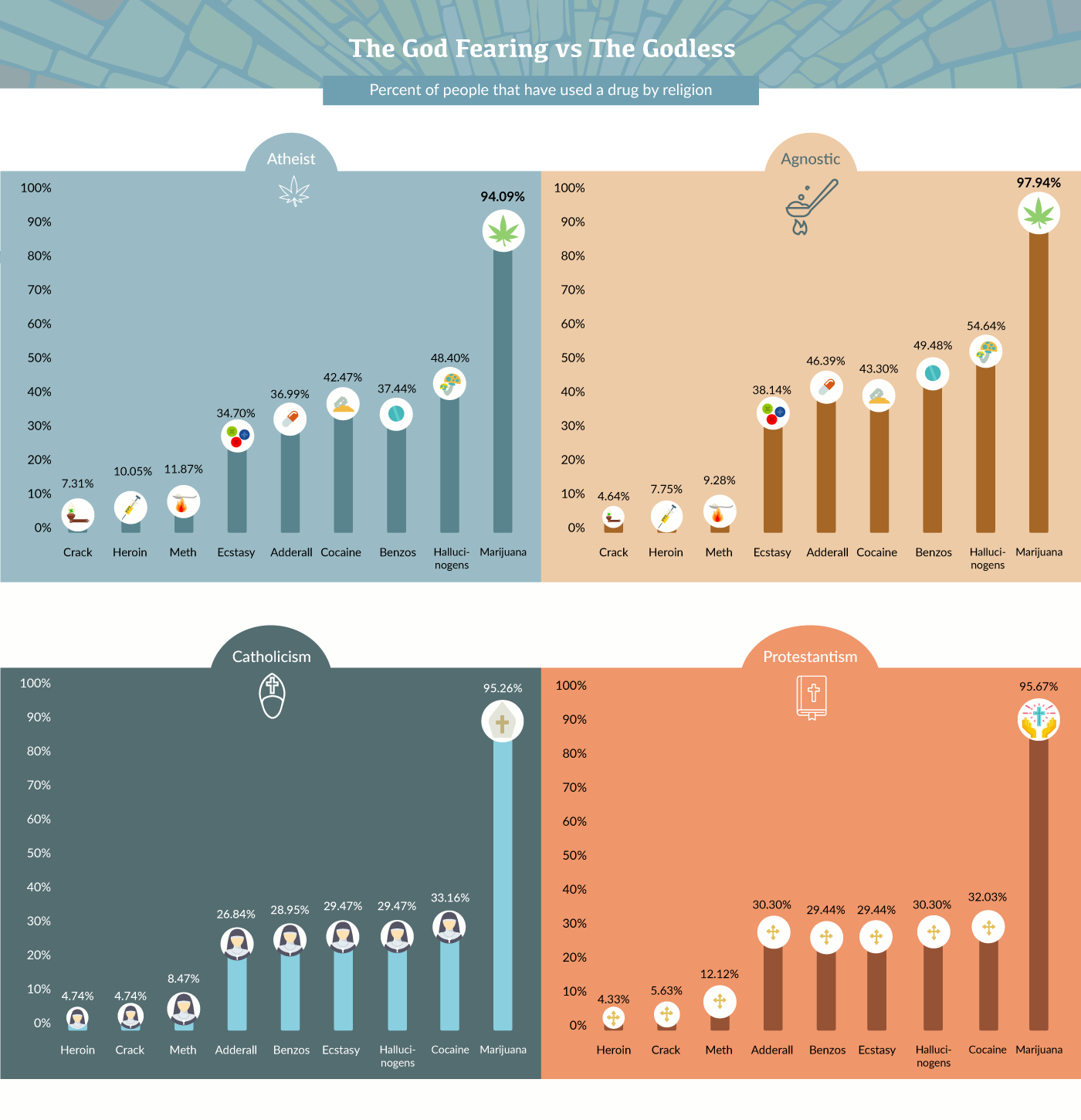 In previous decades the number of people with no religious affiliation had been on the rise around the world. Despite the evolving face of religion in America today, experts project the number of religiously unaffiliated people will actually begin to fall in the coming years.

According to our survey, Americans who identified as agnostic (a person who questions whether or not a god or gods exist) reported more drug use than any other religious identity – but not by much. We also found that men and women who identified as either Catholic or Protestant were more likely to have used marijuana at some point in their lives than Americans who considered themselves atheist (a person with no belief in god).

While marijuana use was nearly equal across all Americans regardless of their religious affiliation, other illicit substances were significantly higher among men and women who considered themselves either atheist or agnostic. Heroin use was twice as high among atheists compared to Catholics or Protestants, and hallucinogens were nearly equally as high. Still, Americans who identified as Protestant had the highest reported methamphetamine use based on our poll. 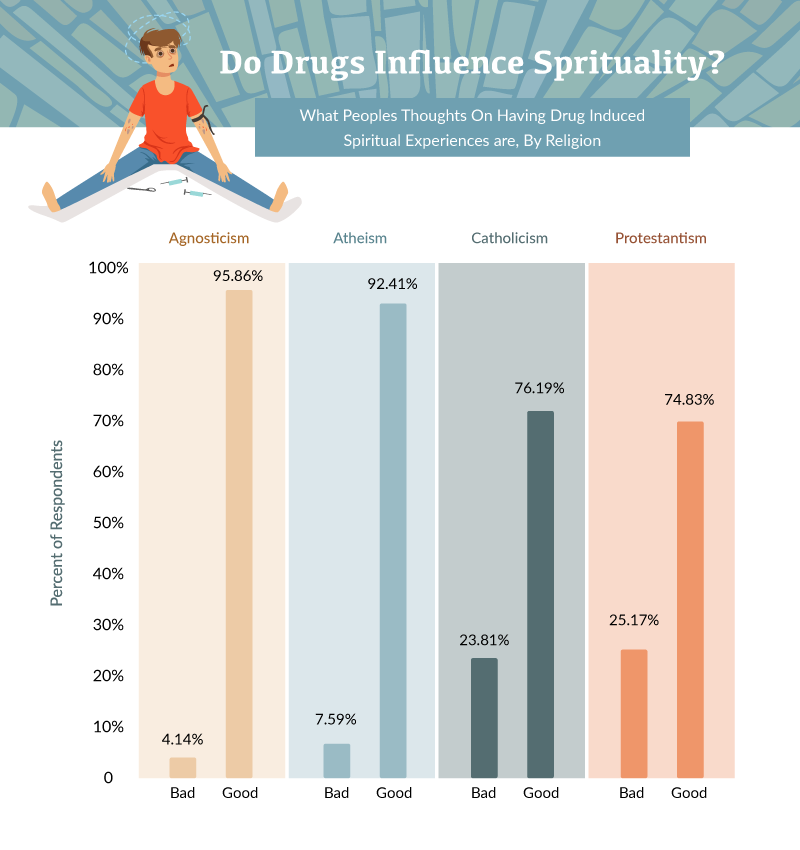 Research has shown the same parts of the brain that light up when a person feels especially connected to God are equitably influenced when you listen to music, feel emotions of love, or even consume recreational drugs. Referred to as the “reward center”, this part of our brain is responsible for releasing dopamine (the “feel good” chemical) and controlling addiction.

For religious and nonreligious people alike, having a spiritual experience under the influence of an illicit substance was generally considered a good thing. While more than 95 percent of Americans we polled who identified as agnostic and 92 percent of atheists suggested they wouldn’t mind having a spiritual experience on drugs, roughly 3 in 4 Catholics and Protestants said the same.

Particularly among hallucinogenic and psychedelic drugs, researchers have been trying to pinpoint the reoccurrence of “mystical experiences” as a result of ingesting some of these illicit substances. In 2017, scientists from Johns Hopkins University commissioned religious leaders from a variety of affiliations to ingest powerful doses of psilocybin (an active ingredient in magic mushrooms) to determine whether or not these out of body experiences might make the leader more confident or effective in their religious thinking. The result of this study remains to be seen. 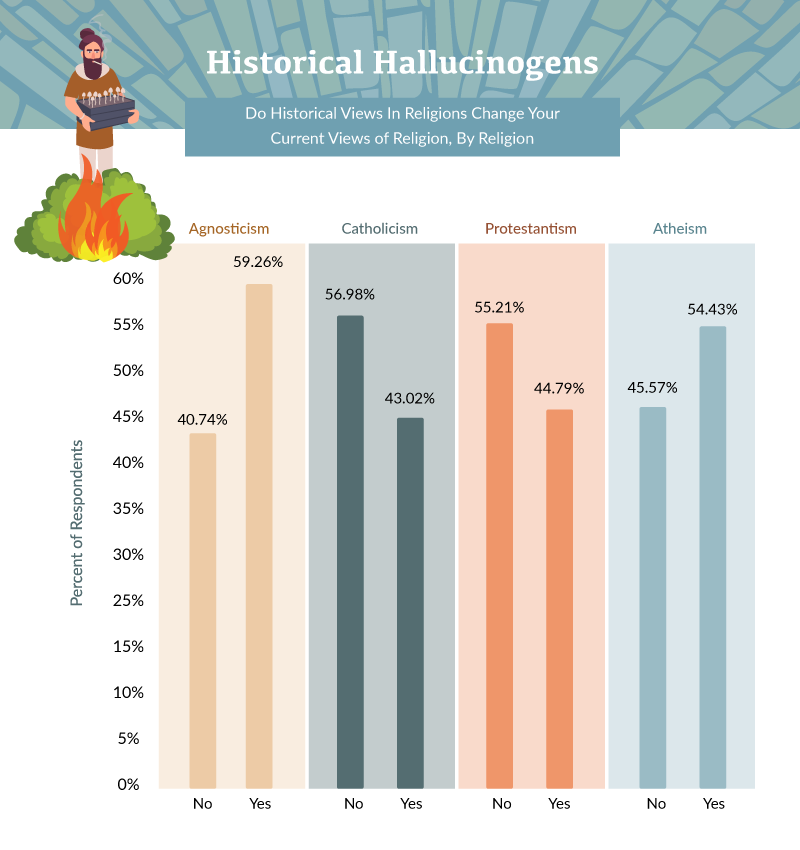 When it comes to drugs and religion – there may be a deeper historical connection than most people realize.

Some scholars point to specific passages and translations in the Christian Bible that could have been referring to the healing and restorative properties of marijuana in ancient times. As far back as the prehistoric age, research has shown how various forms of what we would call illicit substances today (including opium and hallucinogens) might have been used in both medical and religious ceremonies. According to Americans we polled, this context could have some impact on how they decide to think about drug use in their own lives.

For nearly 45 percent of Protestants and more than 43 percent of Catholics, ancient references to drug use in a religious text or by religious leaders influenced how they perceived the negative impact of drugs. More than half of agnostics and atheists we surveyed said the same. In comparison to the types of drugs referenced in historical texts many of the substances identified in the opioid crisis today fall into the category of synthetic opioids. Like heroin and fentanyl, synthetic opioids have been modified from their naturally occurring state making them more dangerous and often more deadly than the kinds of substances ancient religious leaders and texts may have been referencing. 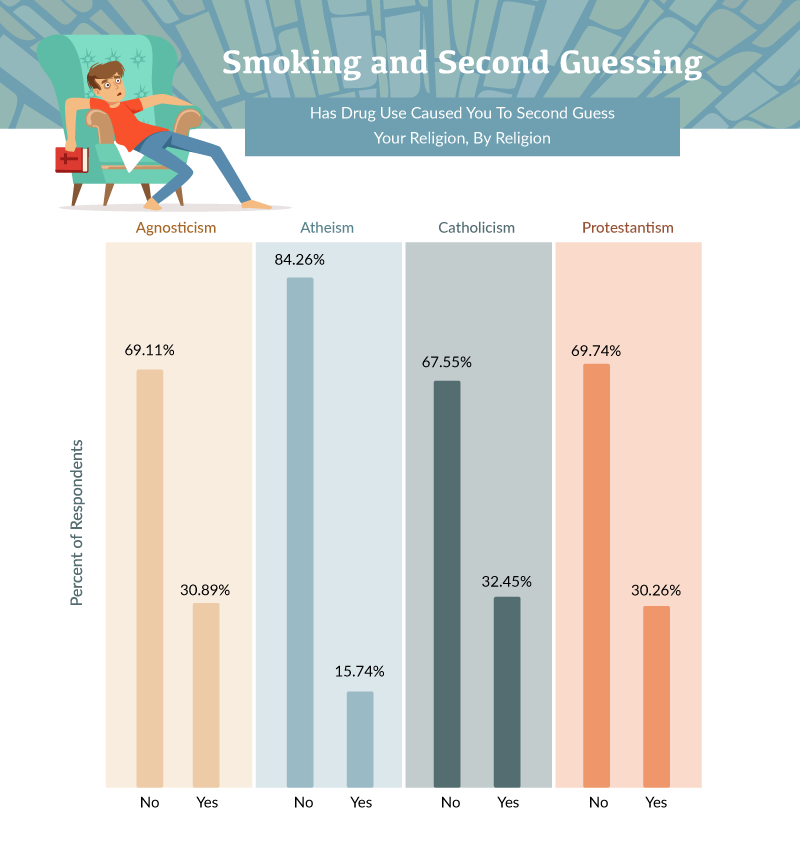 Anxiety can be one of the most frequently interlinked co-occurring disorders with drug abuse and it may only get worse as addiction progresses. In some cases, people may attempt to self-medicate with drugs like marijuana to help provide short-term relief for the symptoms of their anxiety. In reality, research shows drug use can have serious long-term consequences for anxiety making the feelings worse.

While anxiety and self-doubt are often associated with one another, we found drug use could lead to other forms of doubt as well. Nearly 1 in 3 Catholics we surveyed across the country admitted drug use had caused them to reevaluate their religious beliefs, followed by more than 30 percent of the Protestants and other Christians we polled. Atheists were the least likely to second-guess their stance on theism, but nearly 31 percent of agnostics said drug use made them take another look at their position on religious beliefs. 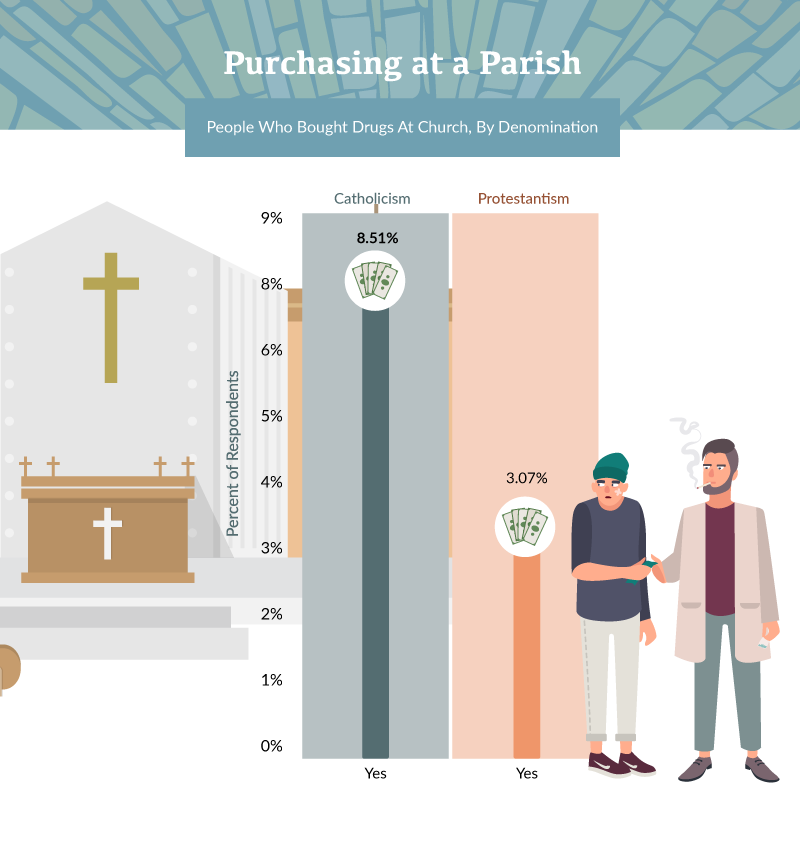 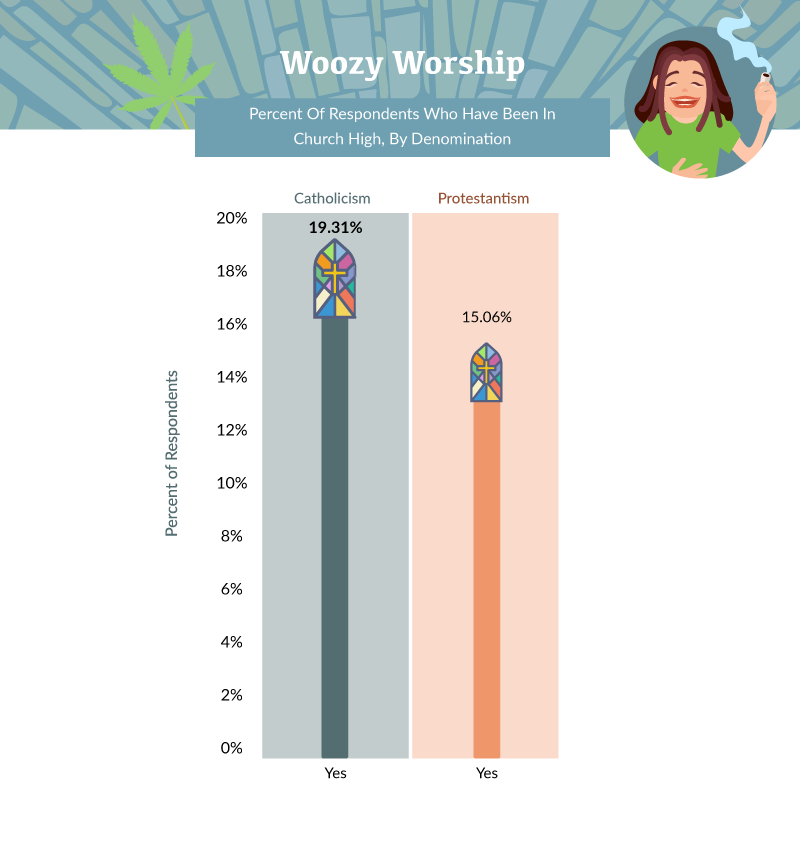 There’s no one place someone might look if they wanted to buy narcotics. Social media, the parking lot outside your favorite movie theater, or even the internet might give you access to a variety of drugs. According to one resource, Yelp might even be able to help a person score illicit substances if you know what to search for.

According to the people we polled, your local church might not be off limits either. More than eight percent of people we polled who identified as Catholic and over three percent who considered themselves Protestants said they’d purchased illicit substances at their place of worship.

Buying drugs aren’t the only thing Americans are doing at church either. Nearly 1 in 5 Catholics told us they’d been high at mass at least once, and more than 15 percent of Protestants admitted they weren’t just breaking bread in between sermons, they were doing drugs too.

For some, religion is less about organized practice and more a personal connection to the force or power you believe in. Catholic, Christian, agnostic, or atheist – our survey found drug use occurred among Americans of all religious persuasions and that even the church itself wasn’t off limits when it comes to buying or using these illicit substances. The grip of addiction doesn’t discriminate between religious affiliation either and Americans we polled who considered themselves believing, spiritual, or even devout admitted to using drugs like cocaine, heroin, and methamphetamines.

If you or someone you love is battling with drug abuse, help is waiting for you. Addiction can happen to anyone and we know a successful approach needs to be customized to you or your loved one to help avoid relapse. From detox to therapy and rehabilitation, the very first step towards sobriety is seeking help to break the cycle. At Addictions.com, we’ll help connect you with our on-call health professional and find the best rehab recommendations in your area. You are not alone. To start living your best life again visit our rehabs page to learn about affordable treatment.

We surveyed 1,012 people who use drugs regularly. These people chose to participate in the survey openly. The only qualifier was that the people surveyed had to regularly use drugs. We had a mixture of religions but due to low numbers of other religions we decided to focus on Christianity, Atheism, and Agnosticism

Want to use our study on your web site?

Please feel free. All that we ask is that you include a link back to this page so readers can learn more about the study.