If America Had Filipino Drug Laws

In the United States, if you get caught using or selling illicit drugs, you might know what kinds of penalties you can expect. Fines, jail time, probation, and mandatory substance abuse programs aren’t outside the realm of possibility depending on the federal, state and local laws where the crime took place.

But what about capital punishment?

It may sound absurd, considering that capital punishment – death – is controversial enough even in the most heinous of crimes, but in other countries around the world, capital punishment has evolved into an acceptable response to manage the evolving “war on drugs”. In the Philippines, more than 7,000 people have been killed to-date for their expected role either selling or using drugs across the country. These murders are part of a new campaign to eliminate drugs in the Philippines by the newly elected President, Rodrigo Duterte, and his tactics have already begun to spread to surrounding Asian countries, including Indonesia.

In contrast, we studied five major cities across the U.S. (New York, Seattle, Boston, San Francisco, and Miami) with some of the highest rates of drug-related arrests and allegations and envisioned what life might be like if laws like those in the Philippines were enacted in America. Read on to see what we discovered. 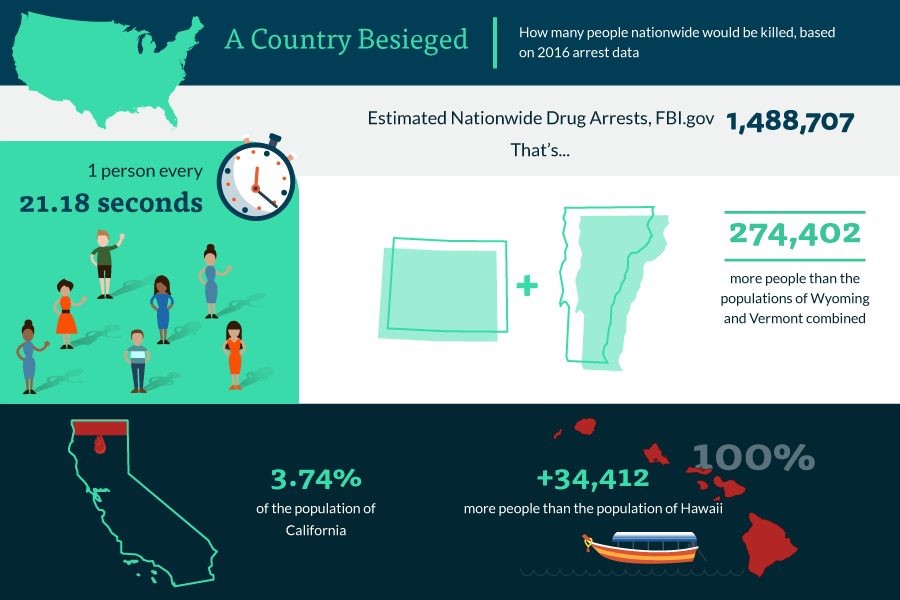 The criminal justice system in the United States bears little (if any resemblance) to that of the Philippines – with one major exception. While the consequences of drug use vary wildly between both countries, they’re both employing scare tactics in an effort to curb or eliminate criminal activity.

Unfortunately, after decades of research, experts have indicated that the fear of punishment doesn’t quite have the positive effect lawmakers might be hoping for. Not only can jail time in the U.S. increase the likelihood of repeat criminal behaviors (particularly among non-violent crimes like drug use and possession), even the fear of capital punishment has little impact on the rates of violent crimes like homicide.

If the United States were to escalate the war on drugs to match the brutal, unforgiving response to drug use that President Duterte has established in the Philippines, one person would be killed every 21 seconds across the country. Given the more than 1.4 million drug arrests made in 2016, those deaths would equate to more than the entire population of Hawaii over the year, and over 274,000 people more than the total population of Wyoming and Vermont combined. 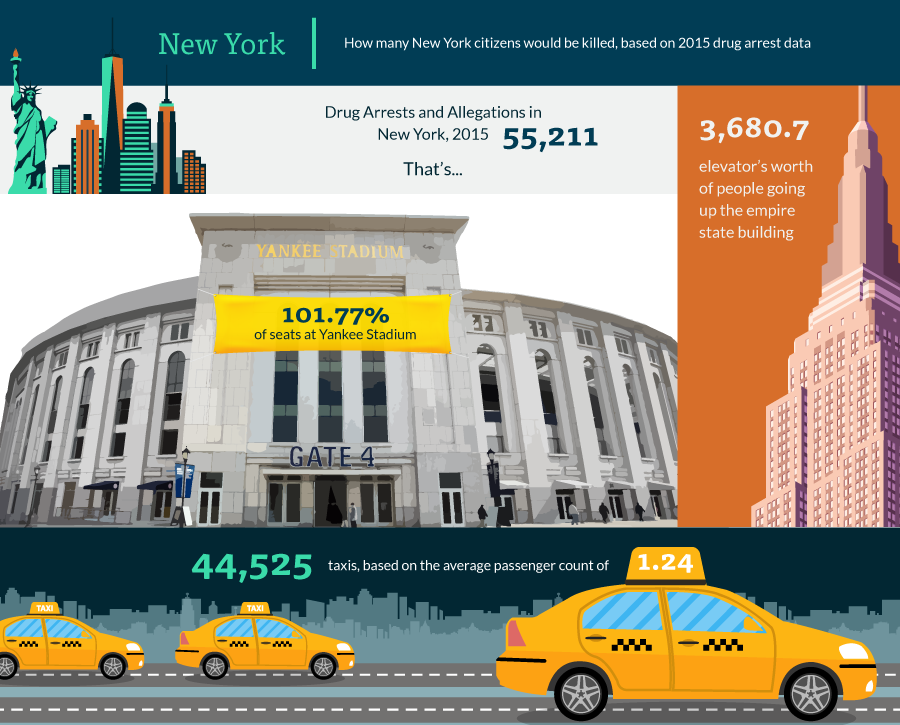 The Big Apple on Drugs

The Empire City isn’t just one of the most popular American cities across the country, it also has more illicit drug activity than many major metropolitan areas combined. In 2015, there were more than 55,000 drug arrests and allegations across the city – and a record high number of accidental overdose deaths.

In 2015, the number of deaths from misuse and overdose had risen by 73 percent over the previous five years, with heroin accepting for the highest number of fatalities. The city of New York has a long-standing history of heroin misuse that dates as far back as the 1900s when it was marketed by brand-name pharmaceutical companies as a safe, “non-addictive” medication alternative. Today, the number of victims claimed by heroin has increased 158 percent between 2010 and 2015, accounting for more than half of the total drug-related deaths in 2015 across the city.

While the city is focused on creating drugs like naloxone (which can reverse the effects of an overdose) more available, and helping those addicted to narcotics find adequate channels for support, fear tactics like the capital punishment efforts of the Philippines could result in more deaths each year than there are seats in Yankee Stadium, and over 3,680 elevator rides to the top of the Empire State Building. 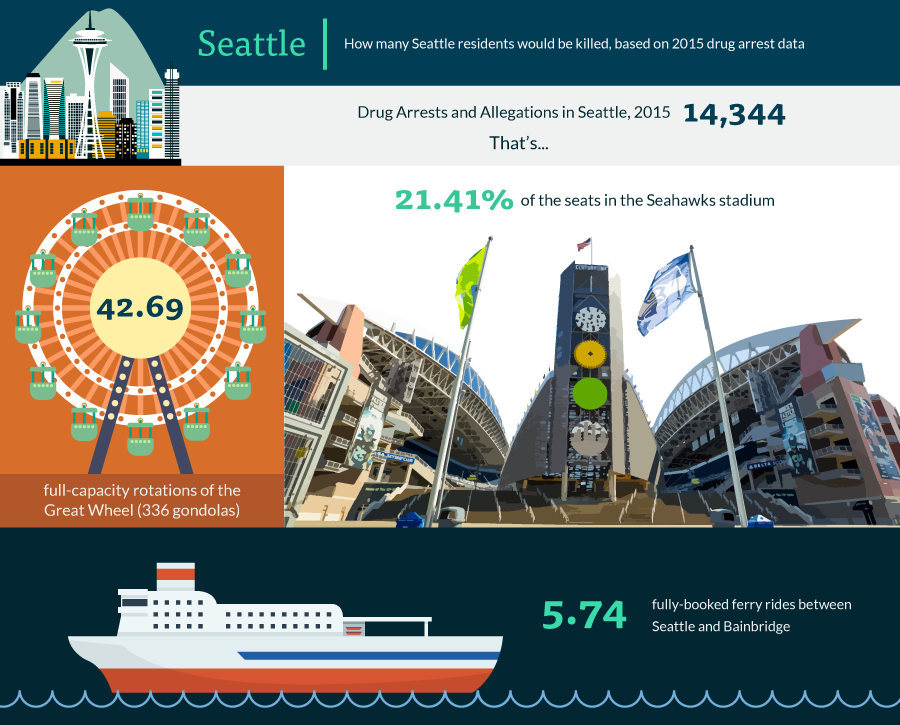 Opioids in the Emerald City

The city of Seattle may be known best for its picturesque landscapes, technology marketplace, and being home to the most successful coffee house on the plant, but it hasn’t been immune to America’s opioid epidemic in recent years.

In 2015, there were more than 14,000 drug arrests and allegations across the city, and 132 deaths from heroin overdose in King Country. In response to this health crisis, the city of Seattle is approaching illicit drug use in a new and unique way. In January 2017, local officials approved plans to bring the country’s first “safe injection” site for heroin users to the city of Seattle. Not to be confused with recreational use, the main goal of these efforts is to engage drug users in education and treatment to help them overcome the conflict of addiction.

In contrast, if Seattle adopted the recent efforts of the Philippines by executing people accused of selling or trafficking drugs, enough people would be killed to fill nearly six fully-booked ferry rides between Seattle and Bainbridge or nearly a quarter of all the seats in the Seahawks Stadium. 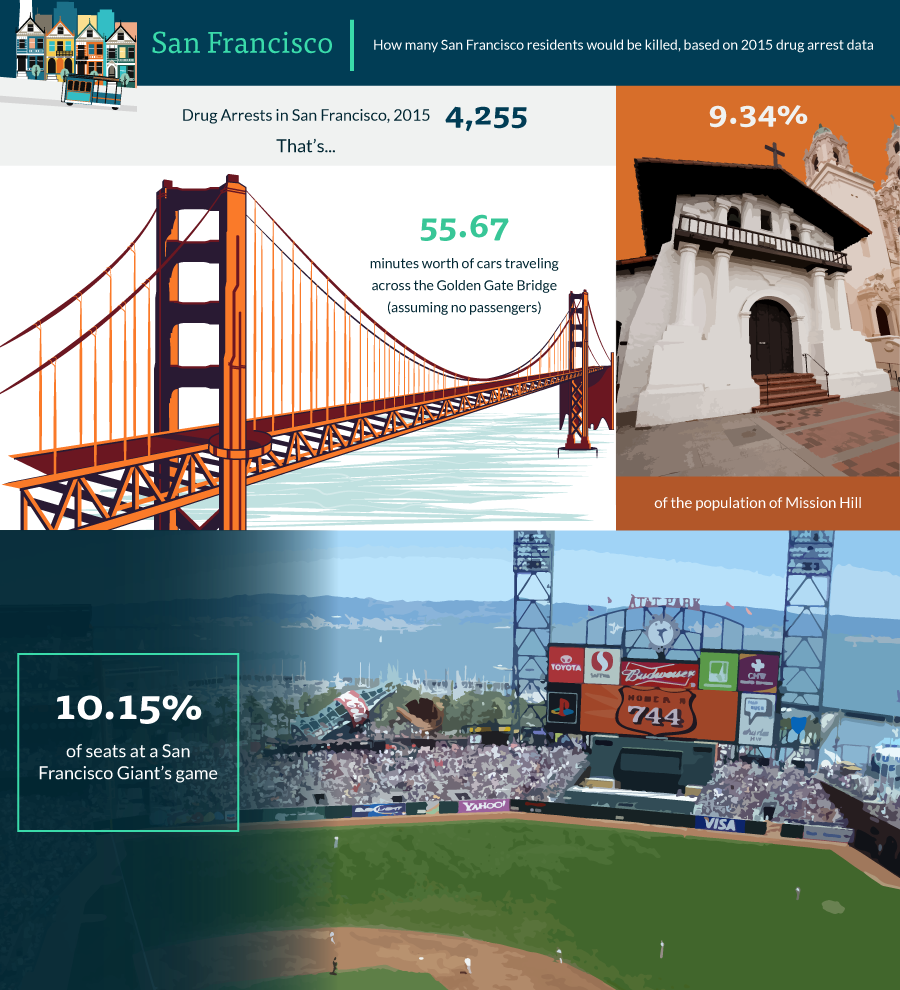 Narcotics by the Bay

The city of San Francisco has two very different sides of the population who’ve been impacted by drug use. On the one hand, the growing rate of homeless Americans living in San Francisco who also happens to be addicted to opiates (including heroin) continues to rise, and on the other hand, some Silicon Valley elites have become equally as entrenched in the epidemic. May see the homeless population of San Francisco as a product of the heroin crisis, and as a result of the accelerated growth and construction around the city, drug use by the homeless community has been driven out onto the streets and into the open.

As opposed to employing scare tactics, city officials have increased access to antidotes like naloxone, implemented need swap programs, and in 2015, the city saw a 15 percent increase in the number of people seeking professional treatment at city health facilities. In 2016, the use of naloxone saved nearly 900 lives across San Francisco. If instead of working towards a solution, the city murdered those afflicted with addiction, they would kill enough people to fill one out of every ten seats at the Giant’s Stadium. 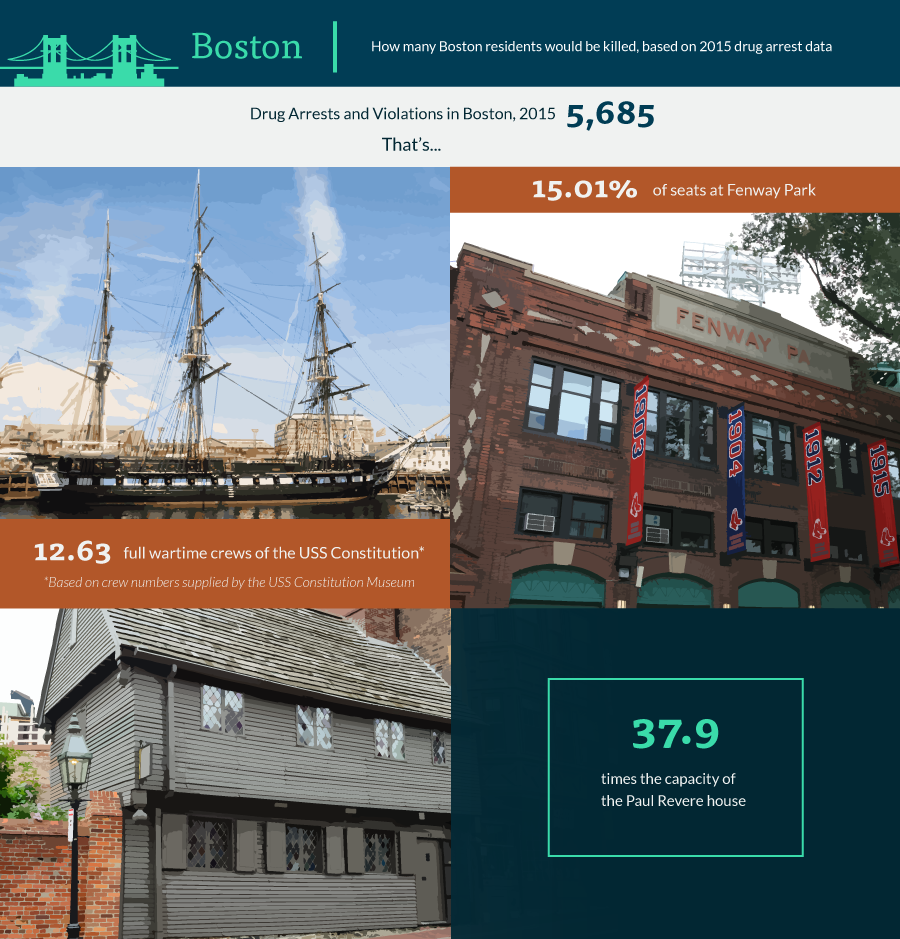 The Impact of Effective Treatment

Perhaps no city has been besieged by the opioid epidemic quite like Boston, Massachusetts. With more than 450 opioid-related hospital visits per every per 100,000 residents across the entire state in 2014 (the last year for the data), and a rising number of overdose deaths, the state’s treatment center solutions have struggled to keep up with demand. In an effort to prevent addiction, Governor Charlie Baker signed an effort into law in 2016 aimed at preventative education, and increasing requirements for medical professionals to monitor the allocation of prescription drugs. Still, an average of 38 people died every week in 2016 from opioid use alone in the state of Massachusetts – with fentanyl, a drug several times more potent and deadly than heroin, leading the way.

To help those impacted by addiction, the law enforcement community have identified opiate use as the disease that it is, and instead of threatening to incarcerate or charge people suffering from drug dependence, the Massachusetts police are offering immunity and an effort towards recovery to those who come forward seeking it. As a response to the collective efforts across the state, the fatal impact of opioids in Boston and the surrounding areas has lessened according to some of the most recent reports.

Results, and compassionate care like this highlight just how far drug treatment can go to reverse the effects of addiction. 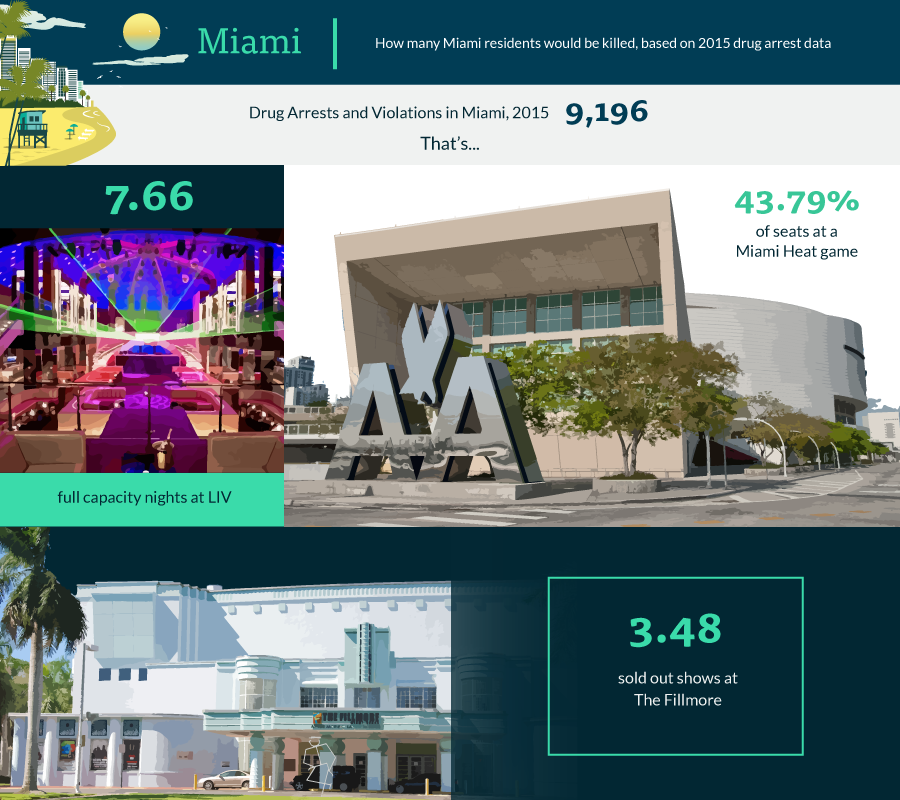 An Alternate Ending for the Cocaine Cowboys

Deep in the heart of the sunshine state is one of the most notorious drug capitals of the United States. While the rest of the country is entrenched in an opioid epidemic involving heroin and fentanyl, Miami’s drug use problems seem to have taken a step back in time.

In the late 70s and 80s, Miami became famous for the sheer volume of cocaine that had flooded its streets, and the high profile criminals who helped sell and supply it. Today, the production of cocaine from Colombia is at an all-time high, and the number of people dying from cocaine-related overdoses rose to more than 1,800 across the state of Florida in 2015. In an effort to eliminate the cocaine crisis in the 80s, the U.S. government instituted mandatory minimum penalties for drug crimes.

Now, imagine if those penalties had evolved since the 80s to match the repercussions currently established in the Philippines. Instead of more than 9,100 arrests and violations in Miami in 2015, there might have been 9,100 executions instead. That would be more than three completely sold out shows at the Fillmore, nearly eight times the capacity of the LIV nightclub, more than two out of every five seats at a Miami Heat game.

The Power of Treatment

While some government officials – both in the U.S. and elsewhere – may believe that the best way to deter criminal activity (including illicit drug use) is to utilize scare tactics by imposing harsher laws and penalties for those convicted, research has shown that those efforts simply aren’t effective. In the Philippines, these laws have taken a turn for the worst, and the use of violent, inhumane tactics are spreading to neighboring countries.

At Addictions.com, we know the best support we can give to you or a loved one battling with drug addiction is the help of specialized treatment and recovery options. No one should struggle with the effects of addiction alone, and our goal is to help match you with the best rehab facilities across the country that will work to get you the care you need to take back your life. You are not alone. Visit us online at Addictions.com today to learn more.

We employed drug arrest data, including both arrests and allegations, from 2015 when available, and likened them to common landmarks, stadiums, and activities to help put these large numbers into scale. For capacity data, we utilized official numbers for each stadium, building, vehicle, and landmark where possible. As no data was readily available for the USS Constitution’s crew size, we contacted the USS Constitution Museum and used the max end of the wartime crew size they provided as a baseline.