Drug Arrests Across the US

Whether for recreation or out of a perceived need for self-medication, drug abuse has consistently been linked to various interpersonal conflicts, mental health issues, and employment problems.

As of 2015, roughly 207,000 people in the United States were incarcerated in federal prisons, with almost half of all inmates finding themselves behind bars for drug-related crimes. During that same year, the U.S. Bureau of Justice Statistics counted 1.3 million people in state prisons, 16 percent of whom listed drug offenses as their most serious crimes.

Drug addiction is on the rise in America, and the country’s lawmakers are bitterly divided on how to reverse the trend. But new research examining where arrests are taking place, which drugs are pouring into the country, and various other factors provides new insight policymakers can use to stop the surge of addition.

Below, we take a closer look at drug arrests in America from 2012 to 2017, and explore a more detailed approach to the crisis afflicting the country. 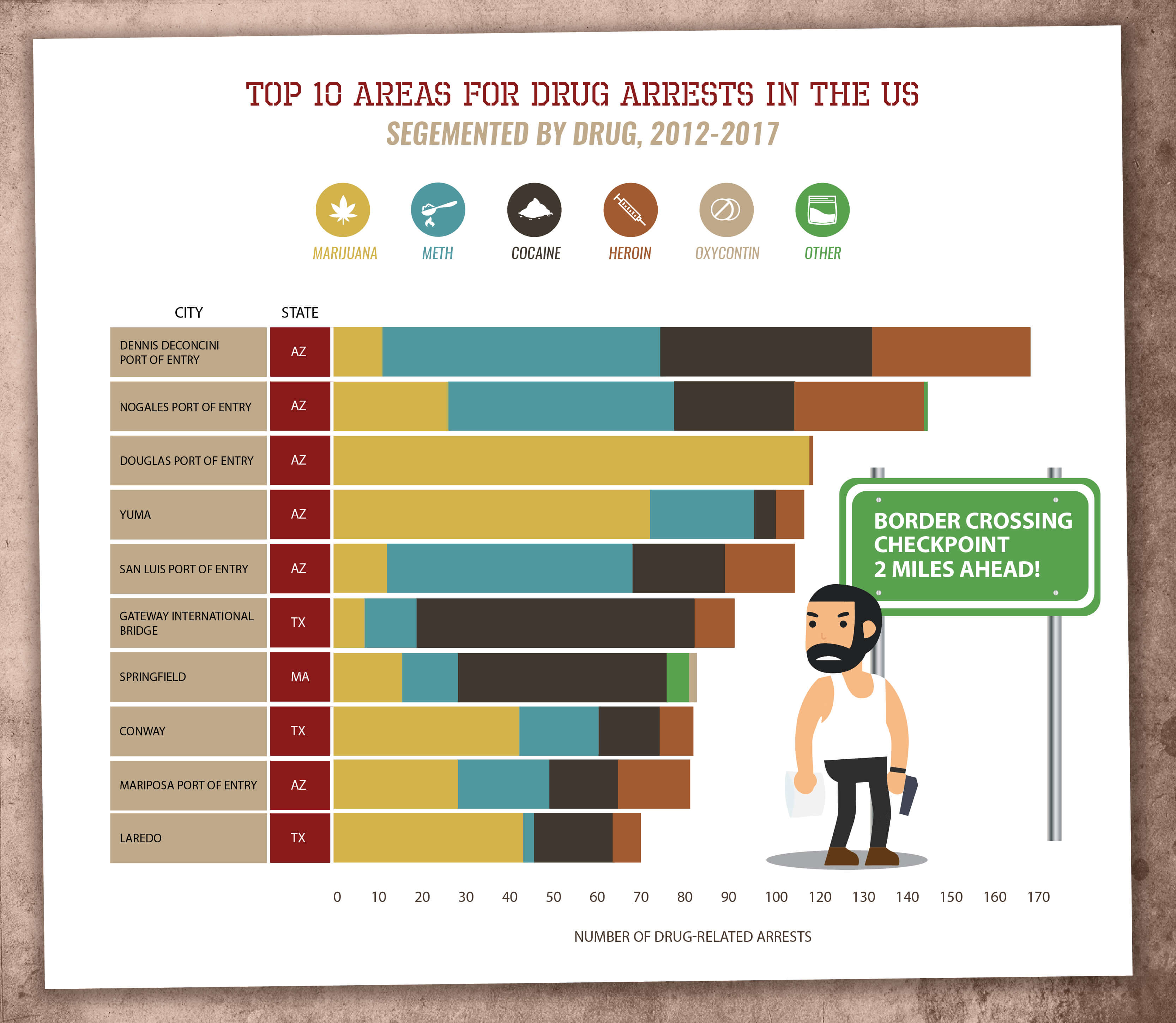 Drug arrests in the United States are by and large concentrated around the southern border, in the same area drug cartels are known to conduct their black market trade.

The highest number of drug-related arrests occur in Dennis DeConcini, a U.S. port of entry located between Mexico and Arizona. The border station in the area has been in service since the early 20th century and has become known as a hotbed for illicit substances. On the 31st of March (after we had finished collecting data), a man was arrested with $500k worth of drugs at the Dennis Deconcini Port of Entry, and another with $91k worth of drugs in Yuma. Other notable mentions include Nogales Port of Entry, Douglas Port of Entry, and other areas along the border.

What Drugs People are Carrying 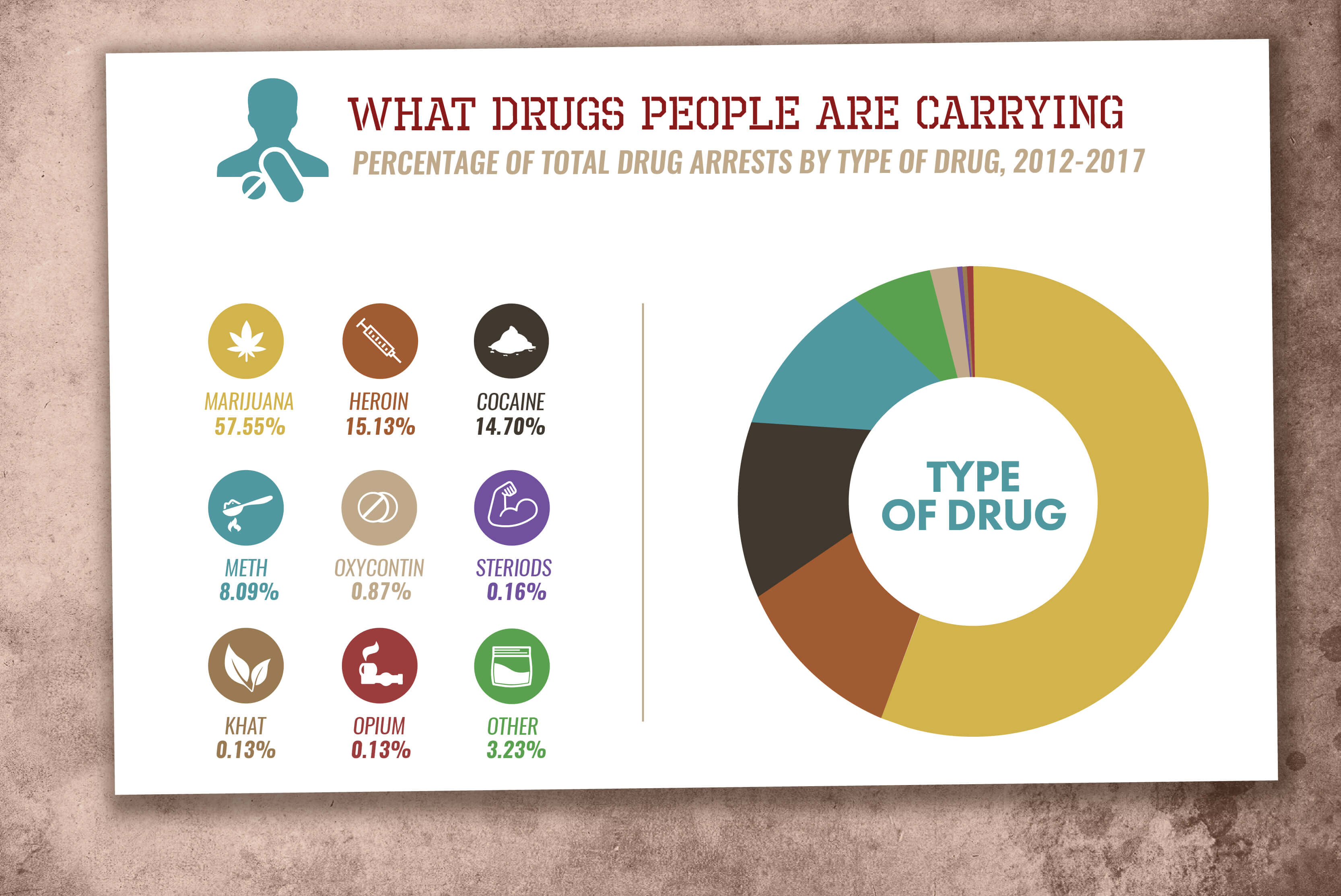 Most Americans likely assume the most common drug associated with arrests is also the most commonly used illicit substance – and they’re correct. According to the data, marijuana accounts for over 57 percent of drug-related arrests, followed by heroin at a distant second place.

This statistic may change in the future as attitudes towards marijuana become more positive, and more state legislatures move to decriminalize or even legalize the substance for various uses.

Drug Arrests over the Years 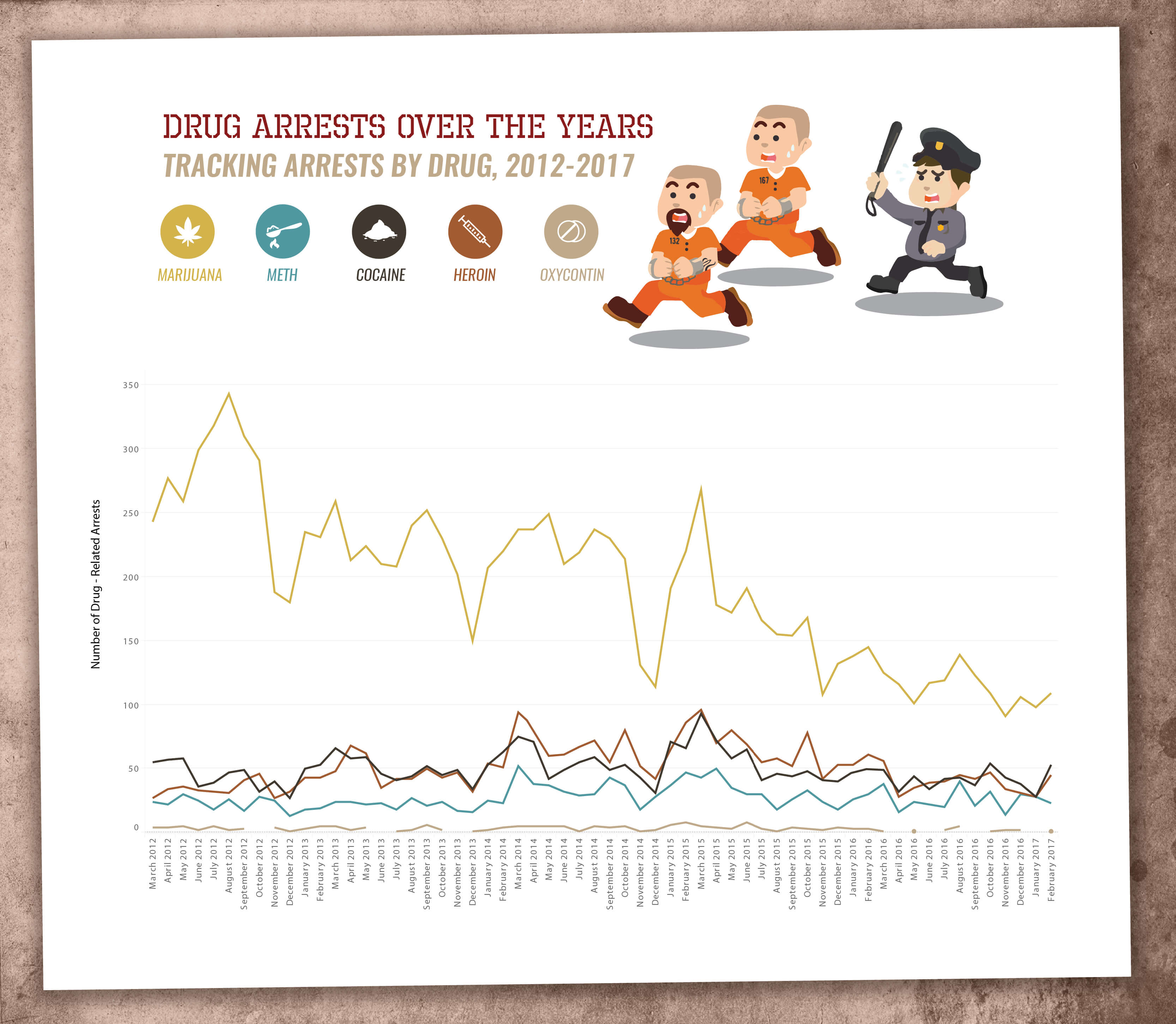 Since 2012, the number of drug arrests in the United States has fluctuated dramatically. However, there appears to be a slow decline in cases reported – at least with marijuana-related incidents.

By contrast, arrest instances for meth, cocaine, heroin, and OxyContin are comparatively stable, although there was a notable uptick in 2014. 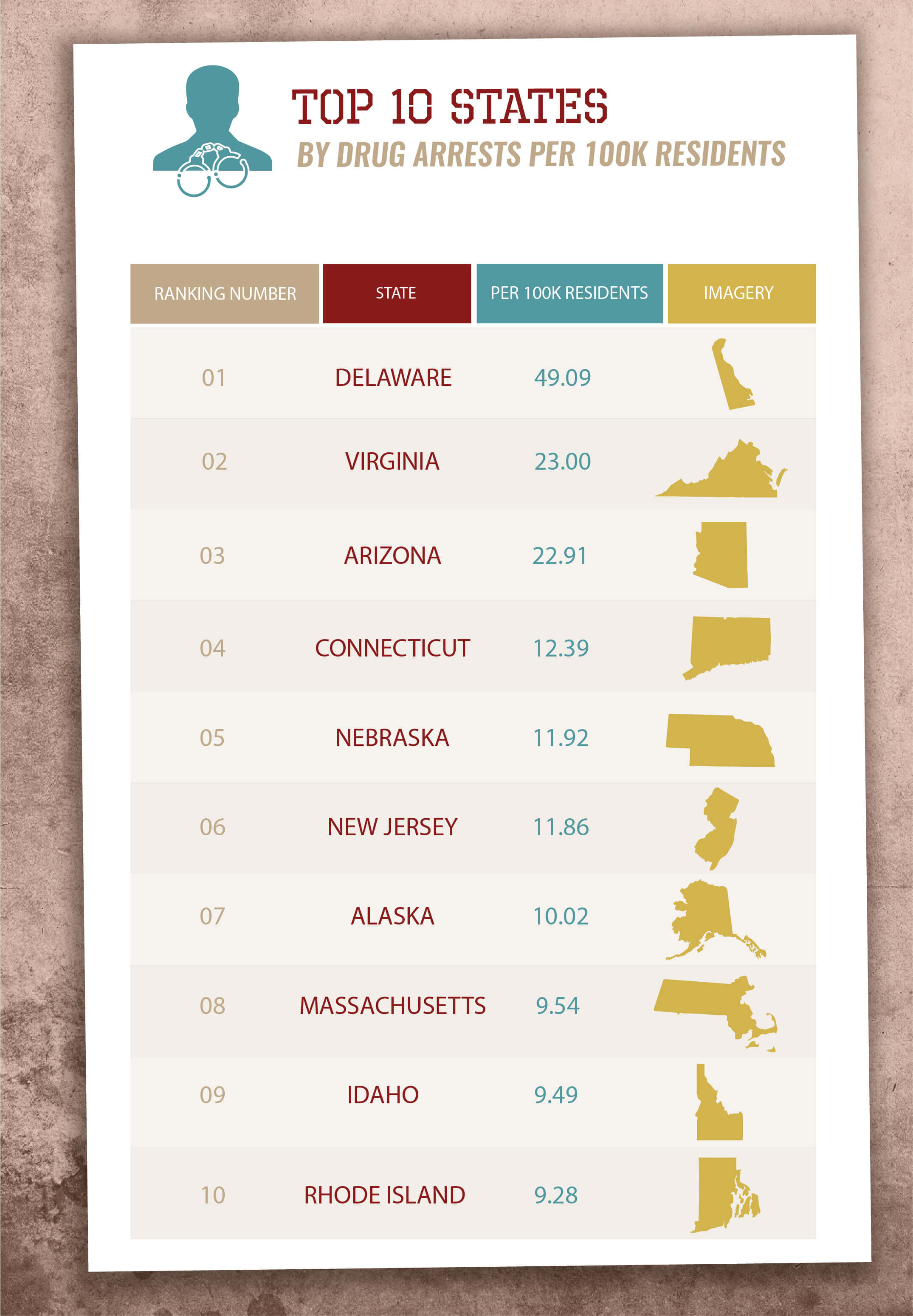 Illicit substances have had a disproportionate affect on the country, creating concentrated burdens in specific areas. If you look at the top ten states for drug arrests per 100,000 residents, you’ll notice the Atlantic coast takes up six of the slots.

Normally, people may assume urban areas are focal points for drug-related delinquency. But with rural states like Alaska, Idaho and Nebraska all making the top ten, our research suggests other factors are in play beyond behaviors associated with inner city environments.

These statistics underscore a dire need for law enforcement and other preventative measures, but drug addiction is a very real and cruel reality for those already affected by widespread circulation.

While government agencies pursue those responsible, individuals who have already succumbed to drug abuse need care and encouragement to turn their lives around.

Just like any other disease or disorder, treatments can vary depending on the person. For more detailed information on how those suffering from addiction can move toward a sober life, websites like this are a good place to start.

Services like these make finding ideal rehabilitation centers as well as medical professionals easy and quick. It is never too late to take the first step.

We scraped drug arrest data from 2012-2017 from drugs.globalincidentmap.com, a site that tracks drug arrests in the news, and analyzed based on geolocation to find where exactly the drug arrests were taking place, what drugs were involved, and how it changed over time.