A person can become addicted to sex, just like they can become addicted to drugs. This is a medically recognized disorder that can be treated with behavioral therapy and other treatment options. However, it is important for the individual to first become aware of their behavior and to look for the symptoms caused by sexual addiction.

Constantly thinking about sex until you are unable to concentrate on other things is one of the symptoms which turns the behavior into an addiction. According to Regent University, “Sexual preoccupation takes up tremendous amounts of energy” and can do so even when a person is not addicted. But if you are truly unable to keep your thoughts off of sex for more than a few minutes at a time, you are more than likely addicted. 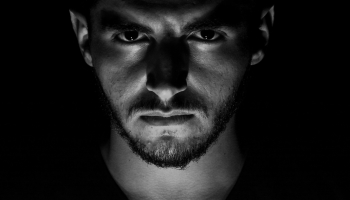 Sex addicts may experience intense anger when they can’t engage in the behavior.

Even though pleasurable activities cause the release of certain brain chemicals that affect an individual’s mood, if you constantly find that your moods are controlled by whether or not you have had sex, you may need to seek treatment. “Severe mood changes related to sexual activity” include feeling intense irritability, depression, or anger when unable to engage in the behavior or only being pleased or happy as a result of sexual activity.

Just like with drug addiction, addicts can become tolerant to certain sexual acts. Noticing that you are no longer turned on by the same things or that you must constantly increase either the amount of sexual activity or the nature of that activity in order to feel the same effects is a sign that you are addicted to the behavior and that your tolerance for it is steadily increasing.

According to a study by the NCBI, “Dissociative experiences were described by 45% of sex addicts and may have some explanatory relevance” to the disorder. Many individuals experience a severe emotional detachment from their activities, and others may try to distance themselves from them by becoming convinced that they are not themselves when they engage in these behaviors.

Someone who consistently insists upon “humiliating and demanding sexual behavior” with a significant other, even when the individual protests, has a problem. In addition, constantly engaging in activities that are destructive to the addict themselves is an issue as well. If you are continually harming yourself or someone else with your behavior (especially non-consensually), it has become destructive and problematic. This could very well be a symptom of your addiction.

you are likely addicted to the behavior. Because you put it first above all other things, you clearly care about it more than anything else and are letting this affect your ability to care about other aspects of your life at all.

8. Using the Behavior to Cope

Using “sexual obsession and fantasy as a primary coping strategy” is clearly problematic, as individuals who can only deal with the problems in their lives by engaging in some sex-based activity are relying too heavily on this practice.

If your sexual behavior causes you to experience negative consequences (be they work, relationship, or law related), you may be addicted to sex. These consequences can include:

“One of the fundamental hallmarks of compulsive sexual behavior is continued engagement in sexual activities despite the negative consequences created by these activities” (NCBI). If you have refused to cut back on your destructive sexual behaviors after experiencing negative consequences like those above (or tried and been unable to cut back), it is likely that you will need professional treatment in order to do so.

Lying and being secretive about your sexual behavior is often a symptom of knowing that it is problematic. When someone constantly feels the need to lie about their behavior, similarly to those who abuse drugs, there is a strong likelihood that they know the dangers and problems of what they do and that they still choose to continue doing it.

Individuals who become addicted to sex are more likely to contract sexually transmitted diseases like HIV, chlamydia, gonorrhea, and others. If you have encountered these health issues, or another that is caused by your sexual activities, you should seek medical treatment for both your physical and psychological disorders.

Addiction can cause a person to ignore the boundaries of social conduct and to become involved sexually with people before any type of other connection is made. This is especially problematic if it occurs often and without the proper attention to safety, and if the addicted individual ignores the needs of others as a result.

If you feel ashamed or embarrassed because you are constantly thinking about or engaging in sexual activities, it can be a symptom of your overall desire to cut back on these activities without being able to do so.

For some addicted individuals, sex isn’t even about feeling good anymore. It becomes a ritual that they engage in because they do not know how to stop. If you feel this way, know that there is a way to stop by seeking treatment.