According to the DEA, narcotics are opioid drugs, examples being “the illicit drug heroin and pharmaceutical drugs like OxyContin, Vicodin, codeine, morphine, methadone, and fentanyl.” Those who abuse narcotics are putting themselves at risk of many issues both physical and mental as well as harmful behaviors that can lead to unfortunate circumstances. While different drugs do cause many of these same issues, the dangers of narcotic abuse are specifically significant, especially with their high availability to those who would abuse them. 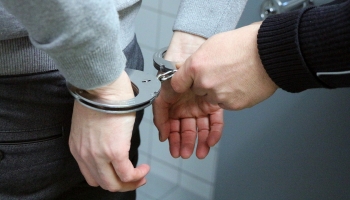 Being caught with narcotics can get you arrested!

One of the most dangerous effects of narcotics abuse is that of overdose. While some drugs do not usually cause a life-threatening overdose syndrome, narcotics, or opioids, are particularly dangerous to an individual in high doses. According to the NIDA, “Taken as prescribed, opioids can be used to manage pain safely and effectively. However, when abused, even a single large dose can cause severe respiratory depression and death.”

Narcotics slow down the body’s functions, including breathing, which becomes very dangerous when a person takes a large dose. Because a person will also likely fall unconscious or into a coma when they overdose on narcotics, they will usually not be able to help themselves and will be especially in danger if they are alone. Someone who overdoses on narcotics should be rushed to the hospital right away.

Even if the individual lives, there are still other issues that can result from narcotics overdose. “Depressed respiration can affect the amount of oxygen that reaches the brain” and may possibly cause brain damage. Researchers are studying whether or not opioid overdose has long-term effects on a person’s brain functions, but the issue is likely to occur. Narcotics overdose can not only be dangerous and harmful but also deadly.

While overdose is particularly dangerous, even being high on narcotics has its own risks. According to the NIDA, “When prescription drugs are abused (taken without medical supervision), impaired driving and other harmful reactions become much more likely.” Individuals who abuse illicit as well as prescription opioids in order to get high can get into accidents or participate in risky behavior that they may later regret.

These issues can lead to other complications as well. An individual who drives while under the influence of narcotics could become hurt or hurt someone else. They may also get arrested. In other situations, a person who abuses narcotics may do dangerous things when they get high like have unprotected sex or take risks in order to get more drugs, putting themselves and possibly others in danger. When someone is high on narcotics, it makes it much more difficult to make smart choices.

If you abuse narcotics, these drugs will begin to affect all aspects of your life. Addiction occurs when a person no longer can stop abusing narcotics on their own, where they are compulsively abusing them to feel their effects no matter what the consequences.

Some of the common results of addiction to narcotics include:

Addiction to narcotics is extremely dangerous and can lead to any of the issues listed above. While someone who abuses narcotics is likely to become addicted quickly, some drugs are more addictive (and more dangerous) than others. The NIDA Teen states, “Some people who start out abusing opioid and get addicted to them may turn to heroin, which can be cheaper and easier to get on the street.” Prescription drug addiction can lead to heroin addiction which will only make it harder for the individual to quit.

There are many physical side effects caused by narcotics abuse which are not only problematic but dangerous, even deadly. In early narcotics abuse, a person may experience constipation, nausea, and confusion, but these issues quickly become more problematic.

In addition, a person who abuses narcotics in the long term can experience one or many of these physical issues, including:

Any of these physical effects can be extremely dangerous, even those which start out less intense. Over time, they can cause even more issues for the individual which, in many cases, will be ignored in favor of taking more of the drug. Especially in the situation of addiction, narcotics abusers will not stop taking a drug when it begins to cause them physical problems. Many times, they would rather ignore these issues than quit which is extremely dangerous.

It is extremely likely for someone who abuses narcotics to also abuse other drugs as well, often at the same time. This is incredibly dangerous and can lead to even more risks than taking narcotics alone. According to SAMHSA, “In emergency department visits involving the use of benzodiazepines in combination with opioid pain relievers [or narcotics], the risk of a serious outcome rose to 44 percent.”

Benzodiazepines are not the only drugs commonly abused with narcotics. Many regular narcotics abusers also drink alcohol which causes an even higher likelihood that they will overdose, start breathing too shallowly, or stop breathing at all. Benzodiazepines cause the same issue. Some individuals even take certain narcotics with stimulants like cocaine or amphetamines. This is extremely dangerous and can lead to a whole different host of problems including heart attack and stroke.

According to the DEA, “Narcotics/opioids are controlled substances that vary from Schedule I to Schedule IV.” Even prescription narcotics are controlled because of the high abuse potential of these substances and the dangers that abusing them may cause. Understanding these dangers may be able to keep you from experiencing them or even to help someone who has been abusing narcotics and putting themselves at risk.

Opioid Overdose: Why It Happens and How to Prevent It 10 Common Warning Signs of Relapse What are the Symptoms of Post Acute Withdrawal? Kratom: What Is It and How Can I Tell If My Loved One Is Addicted? Tramadol: Effects and Risk of Addiction