Heroin and pain medications in particular, continue to top the list as the fastest rising addictions in the United States. As with prescription pain-relief medications, just because a medication comes in prescription form doesn’t mean it’s safe to take whenever the mood strikes. For opiate-based drugs – both heroin and prescription pain-killers – a high potential for addiction exists no matter the type of drug. Opiate addiction statistics paint a clear and somewhat surprising picture of the effects these drugs can have when misused as well as when used as prescribed.

Fortunately, opiate addiction statistics have drawn the attention of local governments to the point where 36 states currently have Prescription Drug Monitoring Programs. These programs are designed to track the prescription and dispensing practices for prescription drugs from doctors to pharmacies to patients. While these programs do help to contain opiate misuse, opiate addiction statistic rates continue to grow at alarming rates.

Here are 10 opiate addiction statistics in the making: 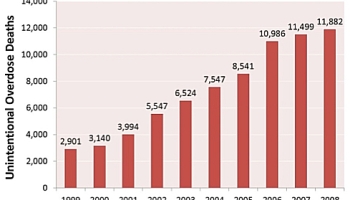 This graph shows the increase in opioid-related accidental overdose deaths in the US from 1999 – 2008.