From finding a job to paying a bill, computers have become a necessary part of everyday life. With just a few keystrokes, computers offer convenience, information, recreational pursuits and social activity. Unfortunately, for some people, computers and computer games in particular become the center of their world over time. 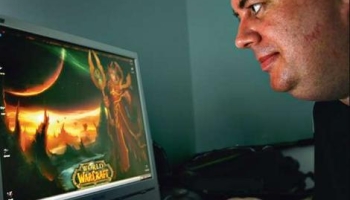 An addiction to computer games will cause you to neglect important aspects of your life.

Nowadays, most everyone knows someone who “loves” to play computer games, whether online or offline. For most people, computer games provide a form a recreation much like a good movie or TV show. Others just don’t seem to tire of playing game after game after game. While excess gaming can be annoying to others, this practice doesn’t necessarily qualify as a computer game addiction unless other areas of a person’s life become adversely affected, according to Shippensburg University.

So what could possibly drive a person to play computer games for hours on end? Any activity that falls in the addiction category involves a series of intertwined physical and psychological processes. The emotional highs and lows experienced during computer game play trigger brain chemical processes that tend to reinforce gaming behaviors. Over time, these chemical processes start to affect a person’s overall psychological state to the point where new behaviors start to emerge.

Not unlike any other kind of addiction, computer game addiction can take over a person’s life leaving ties to friends, family and even work (or school) to fall by the wayside.

How You Can Tell if it is A Computer Game Addiction

Since adults typically have more responsibility than teens, signs of computer game addiction show up in areas involving work, friends and family. Stress relief, relationship avoidance and an overall sense of lack in one more areas of a person’s life can leave him or her at risk of developing a gaming addiction.

According to the U.S. National Library of Medicine, common signs of gaming addiction include:

With teens, the developmental changes taking place in their lives can make it difficult for many teens to cope with the challenges they face. As addictions develop out of a sense of lack in terms of unmet emotional needs, teens can easily gravitate towards computer game addiction.

Signs of gaming addiction in teens include:

Whether teen or adult, anyone dealing with underlying psychological problems, such as depression, anxiety or social phobia disorders can easily develop a computer game addiction.