Video gaming has quickly become a multi-billion dollar industry, attracting kids, teens and adult users alike. According to Pediatrics Journal, an estimated 72 percent of American households play video games on a regular basis. In turn, the average gamer spends as much as 20 hours a week playing video games.

If video game play has become a big part of your child’s time, you may be wondering if they could have an addiction. Video game addiction exists as one of five sub-categories under the diagnosis internet-use disorder, first recognized in 2013 as an actual psychological disorder. While children and teens naturally gravitate towards the computer and video games in general, spending excess amounts of time gaming may place children at risk of developing video game addiction.

Not unlike any other type of addiction, video game addictions develop out of certain types of life circumstances and often become the “filling” for unmet needs and emotional conflicts in a person’s daily life. Children who spend inordinate amounts of time playing video games may have underlying, unresolved issues going on in their everyday life. By identifying a video game addiction early on, parents can take an active role in helping their child work through difficult issues in his or her life. 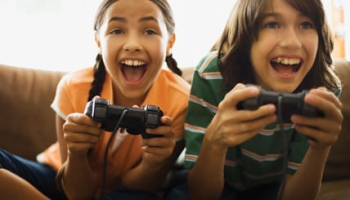 An addiction to video games can have serious consequences for one’s health and well-being!

Today, video games can take the form of computer games, online games and even portable handheld games. Much like the urges and cravings that drive substance-based addictions like drugs and alcohol, compulsive video gaming develops into its own lifestyle.

According to the International Journal of Mental Health & Addiction, 41 percent of online video gamers used the activity as a way to escape from the real world, while seven percent are actually dependent on gaming as a way to cope with daily life. A child who comes home from school and heads right for the video game console may or may not be at risk of addiction. If that same child continues to play games for hours on end, an addiction may be at work.

Compulsive gaming behaviors closely resemble the behaviors exhibited by drug addicts, some of which include:

In effect, it’s the pattern of thoughts, emotions and behaviors associated with the activity that turns a video gaming habit into an addiction.

For many people, addictions become a means for soothing unmet needs, emotional conflicts or even psychological problems. Using video games as a way to cope with unresolved issues places children at risk of developing more serious addictions when they get older.

Much like adults caught up in addiction, children struggling with video game addiction will run into problems in other areas of their lives. These problems may take the form of:

The sooner parents can identify a possible gaming addiction the sooner the child can get needed treatment help.