Every parent can agree that one of their worst fears is their child abusing drugs or alcohol. Education is by far the best means of preventing drug abuse among teens, but this is not always enough to overcome social pressures and misconceptions that can lead down the road of addiction. However, according to the Partnership for Drug Free Kids, there are a number of detection techniques that parents can employ to determine whether or not their child is using drugs.

Perhaps the best way to detect if your child is using drugs is to ask them. Parents generally know when their child is being dishonest, so even if they lie you will know the truth. There are also other benefits to this approach, including:

All of these things make this the best method of detection.

Another good method is a home drug test. These are available at most pharmacies, and involve collecting a sample of your child’s urine, hair, or saliva for testing by an independent laboratory.

If you are concerned about your child’s reaction to a home drug test, there is always the option of having the school test your child. According to the National Institute on Drug Abuse, the purpose of school drug testing is deterrence and getting kids on drugs the help that they need.

Sleeping patterns are a very good way of detecting drug use in teens. Particularly the use of stimulants such as cocaine and methamphetamine. If it appears that they are not sleeping for a period of days, and then they sleep for an unusually long time, they may be using drugs. 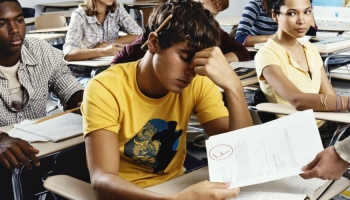 A decline in your child’s academic performance is an indicator of drug use.

Your child’s grades can also be a very good way to determine whether or not they are using drugs. Sudden declines in academic performance are one of the biggest hallmarks in teen drug abuse.

Feedback from members of your child’s social circle can help determine drug use, as well. Some things to look for are:

These could indicate that your child is using drugs.

Changes in attitude can indicate drug use, as well. These include:

It should be noted, however, that these things alone do not necessarily mean your child is using drugs, as they are fairly common teen behaviors.

The space a child occupies most can say a lot about who they are, and what they are doing. Watch for:

These things can indicate drug use in your teen.

There are many psychological signs of drug abuse. These include:

Again, these signs do not necessarily point to drug use, but are often an indicator.

Perhaps the least effective means of detecting drug use is physical symptoms, as these can be associated with any number of things. However, you should take note if you see:

All of these symptoms may point to drug use. If, after utilizing these detection methods you determine that your child is using drugs, the most important thing you can do is get them help. Their future, and even their very lives may depend on it.

8 Ways to Love an Addict Finding the Best Addiction Treatment for a Spouse Motivation for Change: Helping an Addict Break the Cycle 10 Things a Drug Dealer Might Say And How To Recognize if Someone you Love may be Involved in Drugs Families and Addiction: Learning to Break the Cycle