Drugs From Last Night – What drugs do people text about?

Have you ever woken up after a long night out and realized you sent out a text you wish you could take back? Maybe you said something about a bad date or a terrible coworker you’re afraid will get out now. Now, what about accidentally sharing your experience about a bad dose of heroin or prescription pills?

It might not sound like the kind of thing you expect to show up in a text message from a friend or loved one, but more Americans are testing and consuming illicit drugs than ever before – and more people are dying from them.

In 2016 alone, more than 35,000 people died from overdoses of synthetic opioids and heroin. Even among teenagers and young adults, illicit drug use is on the rise. To understand how people talk about their experiences with drugs in the most casual and sometimes brutally honest environments we studied more than 71,000 entries from the website Texts From Last Night. From the types of drugs people are using to the way they feel afterward, we took a first-hand look at drug use in the U.S. today. Read on to see what we discovered.

When conversations about drugs make their way to the web, they’re often in reference to some of the most dangerous substances on the market. Of the more than 71,000 posts from the popular Texts From Last Night website we studied referencing drugs or drug use, more than 1 in 4 mentioned methamphetamines.

It’s hard to say if mainstream media productions like “Breaking Bad” have had an impact on the number of people using meth in America, but drug experts feel confident they have helped normalize the idea of meth. With more than 7,000 overdoses from various forms of the drug in 2016, adults aren’t the only ones using or talking about meth across the U.S. Young adults consuming methamphetamines have a higher risk of incurring strokes and brain bleeds than older drug users, the effects of which are often debilitating or fatal.

More than 20 percent of the 71,000 texts that mentioned drug use included a reference to heroin, and more than 17 percent cited cocaine. Combined, the three most popular drugs quoted in casual conversations were among the three most deadly substances in 2016. 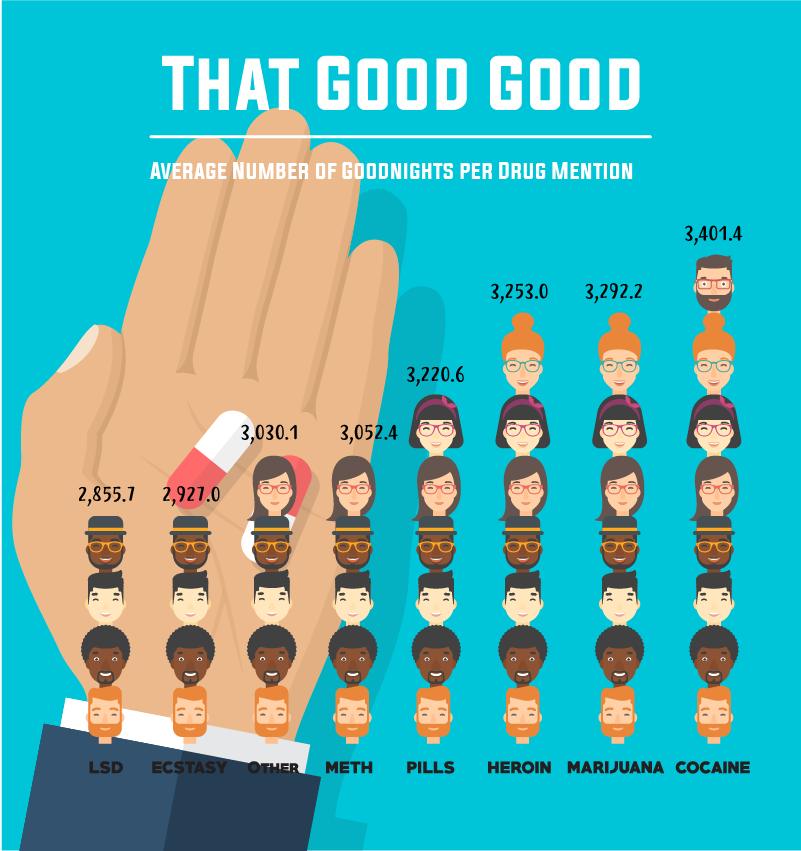 Keeping It (Too) Casual

A text referencing drugs or drug use that’s categorized as having been a “good night” could imply that regardless of the consequences or danger, the user didn’t regret their decision. Of course, not every submission mentioning drugs on Texts From Last Night specifically references literal drug use, but at the very least could be casually commenting on them for the sake of a joke. According to our research, drugs were nearly twice as likely to be tagged under a good night than a bad one on TFLN.

As the legal status of drugs like marijuana continues to change, some have asked if casual or recreational drug use is really that dangerous. While so little is still understood about substance addiction and how one person can try a drug one time and never consider it again while another becomes addicted or dies, it’s important to recognize that certain factors (including genetics) contributing to addiction may be entirely outside of your control. 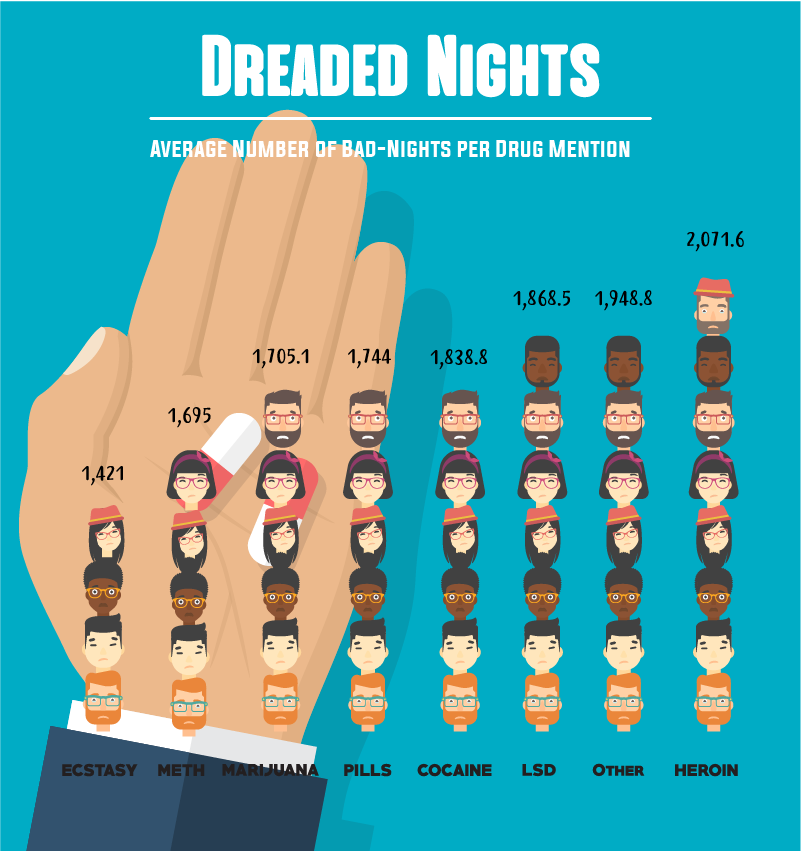 With fewer entries than the number of texts tagged as having been a good night, thousands of people posting their conversations and stories to Texts From Last Night admitted their experiences with drugs weren’t so great.

We found more than 2,000 entries referencing heroin that were filed under a bad night on TFLN – the highest of any substance type mentioned on the site. The consequences of the heroin and opioid epidemic ravaging the country have been far-reaching, claiming more lives in 2016 than any other year prior. Still, some experts have suggested the death toll could be even greater than previously reported suggesting a multitude of deaths associated with opioid misuse have gone unreported over the years. In just one week, a Cincinnati newspaper reported 18 deaths as a result of heroin use, at least 180 overdoses, and 15 children born with heroin-related medical problems.

Another 1,800 posts each tagged under a bad night referenced LSD and cocaine while 1,700 mentioned prescription pills and marijuana. Despite being categorized as a “party drug”, substances like LSD can negatively impact your mood and perceptions of reality leading to horrifying feelings of anxiety. 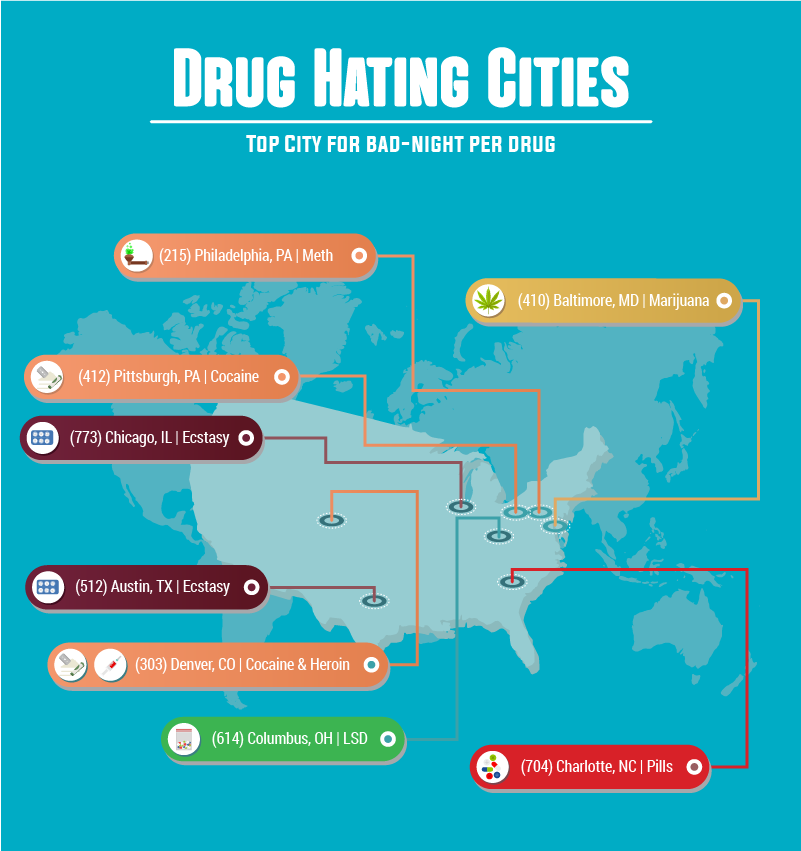 Conversations submitted to Texts From Last Night are posted anonymously with the exception of the user’s area code. So which cities are talking about drugs the most and filling their experiences under a bad night?

Posts, where people talked about the bad experiences they had with heroin, were the most common in the 303 – Denver, Colorado. In 2015, more people died from opioid and heroin overdoses in Colorado than by homicide, a number that’s increased by nearly five times in the last 15 years. Even a public library in Denver turned into a drug den with rising reports of overdoses and sexual assaults since the beginning of 2017.

Denver and Pittsburgh, Pennsylvania (412) tied for the highest number of cocaine-related submissions, and marijuana was the most shared substance in Baltimore, Maryland (410) a city with no legal marijuana laws to-date. 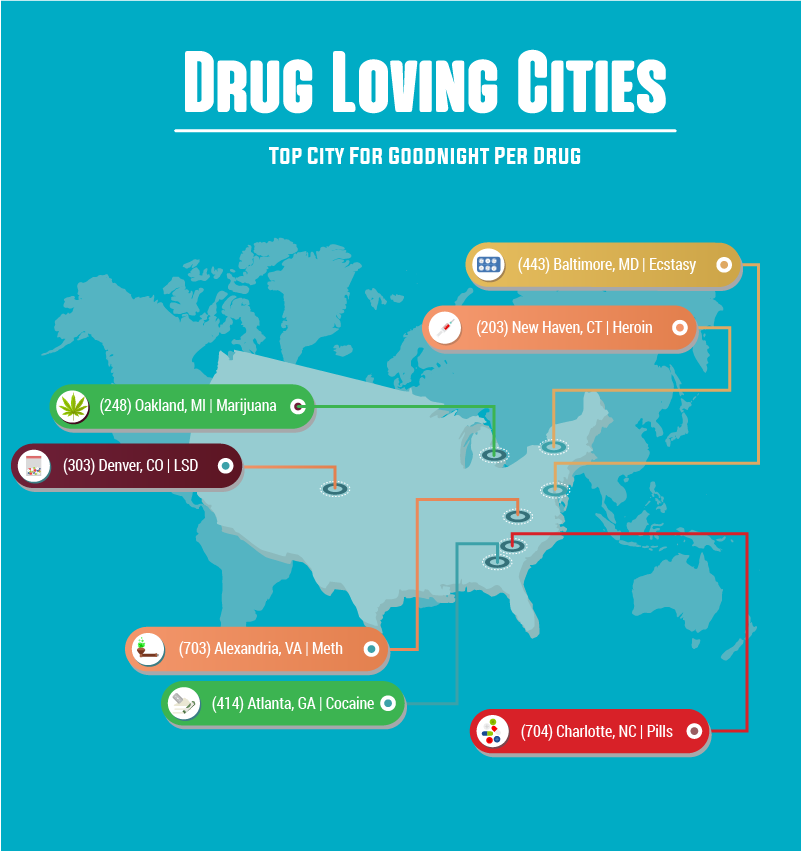 And which cities were sharing their positive experiences with some of the most dangerous and illicit substances in the country?

Posts to TLFN shared from the southwestern parts of Connecticut (203) including New Haven, Bridgeport, Norwalk, and Waterbury had the highest concentration of heroin-related posts tagged under a good night on TFLN. In recent years, the number of people overdosing from opioids in Connecticut has been higher than the national average and doesn’t seem to be slowing down. In 2013, the number of accidental deaths related to drugs in Connecticut was nearly twice that of alcohol-related deaths.

Just south of Detroit in Oakland County, Michigan (248) were the highest percentages of positive marijuana-related submissions. Marijuana is the most commonly used illicit substance in the world since more than 11 million teens and young adults between 18 and 25 are using marijuana every year. While the laws regulating marijuana continue to change, research has shown long term consequences of marijuana use can include reduced cognitive capacity, verbal deterioration, and memory loss.

Meth posts were most popular in northern parts of Virginia (703) while prescription pills ranked highest in Charlotte, North Carolina (704). 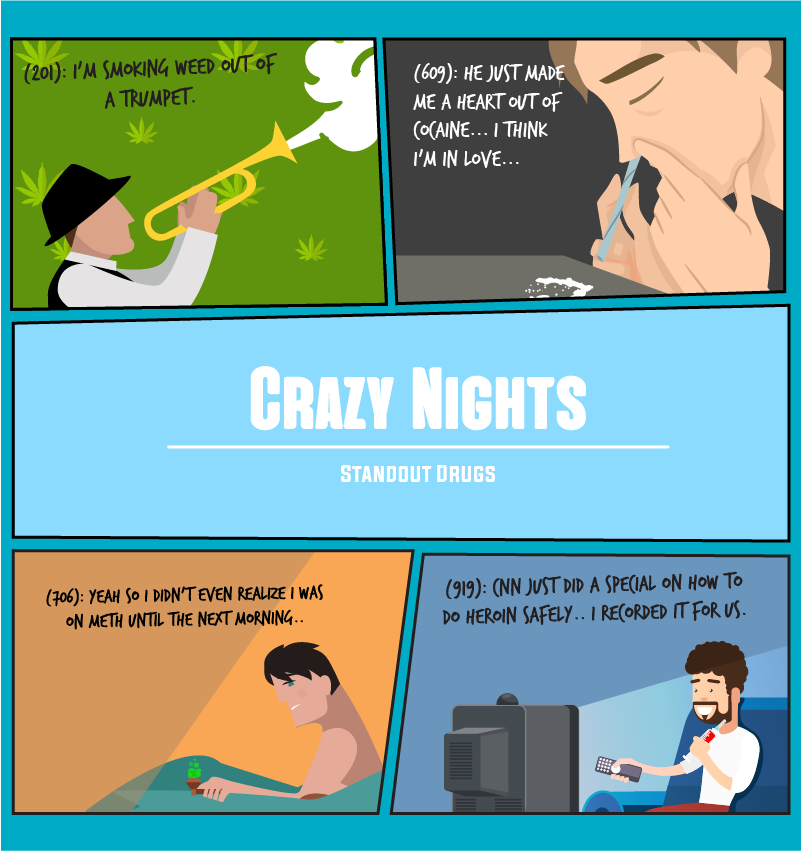 Whether shared in passing as part of a joke or a real-life experience with one of the deadliest drugs in the country today, the reality of heroin, methamphetamines, cocaine, and prescription pills are no laughing matter. Despite the casual nature, some people may approach them within a conversation and even in recreational use, thousands of people die every year from accidental overdoses and substance abuse.

If you or someone you love is suffering from addiction, help is here for you. At Addictions.com, we know what it takes to get sober and stay healthy can be different for everyone. We’ll help you build a customized treatment plan based on your needs and unique situation without compromising the quality or success of your care. From intervention to rehabilitation and preventing relapse, we’ll be with you every step of the way. To learn more or to find a rehab clinic near you today, visit our rehabs page now.

We collected every text from Textsfromlastnighy.com (71,316 total). We then used a mixture of textual analysis and geolocation data to pinpoint where the texts were coming from and what they were about.