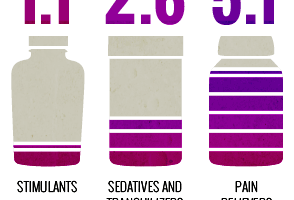 Prescription drug abuse and addiction are very big problems in the United States and elsewhere.

According to the Centers for Disease Control & Prevention (CDC), as many as 2 million people reported using prescription pain pills for recreational purposes for the first time in 2009. This number amounts to 5,500 new users per day, all of which become prey to the effects of prescription drug addiction.

The majority of these prescription drugs come from:

In general, addiction rates for men exceed those for women in any given year; however, women face the greatest risk of developing prescription drug addictions. As a group, women tend to suffer from conditions involving chronic pain more often than men do. Consequently, women are prescribed prescription pain medications with greater frequency.

Since the female body metabolizes medications differently than a male’s, prescription dosage amounts run higher and are used for longer periods of time. A woman’s physiology also leaves her more at risk for physical dependence than men.

While prescription drug addictions can take the form of stimulant, sedative and opiate addictions, opiate or pain pill addictions far exceed those involving stimulants and sedatives. On average, three out of every four overdoses result from prescription pain pill abuse.

The number of emergency room admissions involving opiate drugs doubled within a five year period from 2004 to 2009. In 2008, opiate medications accounted for more overdose deaths than heroin and cocaine combined. Between the years 1999 and 2010, opiate-related overdose deaths increased by 300 percent.

Certain key populations appear to be most at risk of overdoses resulting from prescription drug addiction. These groups include:

It’s really no surprise high daily dosage amounts can place people at risk of addiction and overdose. With Medicaid as a primary health insurance provider, low-income populations and people living in rural areas are twice as likely to be prescribed pain relief medications and six times more likely to die of overdose.

As people affected by mental illness have a whole other set of symptoms to contend with, prescription drug addiction further aggravates these symptoms, which in turn intensifies drug-using behaviors.