Heroin can affect the person who abuses it in many ways, most of which are dangerous or detrimental. The way heroin affects the brain specifically is extremely problematic even though it is the reason why most users start taking the drug in the first place.

Heroin, like all opiates, works as a central nervous system depressant” and binds to opiate receptors in the brain in order to cause its short-term effects.

Over time, these effects can cause the way the brain works to change drastically which can leave the individual in the dangerous and undesirable position of being addicted to the drug.

How Does Heroin Work?

Heroin can be injected, “smoked or snorted up the nose. All of these ways of taking heroin send it to the brain very quickly. This is why the drug is so dangerous and why it is often so quick to cause addiction. When an individual abuses heroin (in whatever form), the drug works through the steps illustrated below:

These immediate feelings in the brain caused by heroin use are pleasurable. They are what will make those individuals who become addicted to heroin want to abuse the drug again and again.

What are the Short-term Effects Heroin Has on the Brain?

Heroin causes many effects on the brain, but those experienced in the short-term are some of the most intensely pleasurable. In many cases, those who abuse heroin do not care about the negative effects of the drug because the ones they experience during a high are so enjoyable.

Abuse of the drug commonly causes these psychological short-term effects:

“The short-term effects of heroin abuse appear soon after a single dose and last for a few hours” (CESAR). After those initial effects listed above begin to wear off, the user will experience an effect that is commonly referred to as going on the nod. This period can last for several hours and is characterized by “alternating between a wakeful and drowsy state.” The individual will also experience physical side effects (such as nausea, vomiting, itchiness, and respiratory depression), but those which are associated with brain activity constitute the high that heroin users are seeking as well as the effects that become addictive over time.

What are the Long-term Effects Heroin Has on the Brain? 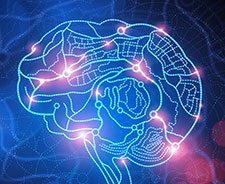 Heroin impacts brain function, and this impact can lead to addiction.

Heroin use can affect the brain even more negatively in the long-term, causing individuals to experience intense psychological problems as well as a compulsion to abuse more of the drug. Many heroin users state that the reason they continued abusing the drug in the first place is because they hoped to experience the same high they felt when they first abused the drug.

Long-term heroin abuse causes the individual to develop a compulsive need to continue taking the drug, also called addiction. The signs above all point to a growing addiction syndrome, and individuals who start out smoking, injecting, or snorting heroin voluntarily will feel unable to stop themselves from continuing. This occurs because the long-term abuse of heroin changes the way the brain works.

Repeated heroin use changes the physical structure and physiology of the brain, creating long-term imbalances in neuronal and hormonal systems that are not easily reversed.” Addiction is one of these where the changes made to the reward pathway cause the individual to crave the drug, to seek it out even to their own detriment, and to compulsively abuse it even when they know it is harmful to them. Studies have also shown “some deterioration of the brain’s white matter due to heroin use, which may affect” a person’s ability to

Heroin abuse causes both short- and long-term effects on the brain as well as issues that may never be fully resolved. It can be incredibly difficult to recover from heroin addiction, and even years later, an individual may still experience relapse. Make sure you seek treatment as soon as possible for chronic heroin abuse, as the effects it can cause to the brain are more difficult to reverse the longer they go untreated.