According to the World Drug Report in 2016, one in 20 adults (roughly 12.5 million people across the U.S.) used at least one illegal drug in 2014. These numbers don’t appear to be decreasing, and for some substances (like heroin) the number of drug users in America is on the rise.

Scientific research has shown us that drug addiction is a chronic disease that affects a person’s ability to think clearly and make quality decisions – but what about the way it affects the people around them?

A person battling addiction isn’t just a statistic or a story though, they could just as easily be your neighbor, boss, teacher, or friend. To understand how deeply substance abuse can affect a person’s relationships as well as their lives, we surveyed Americans across the country who’ve experienced drug and alcohol misuse first hand. Read on to see what they told us about the impact drugs have had on their families. 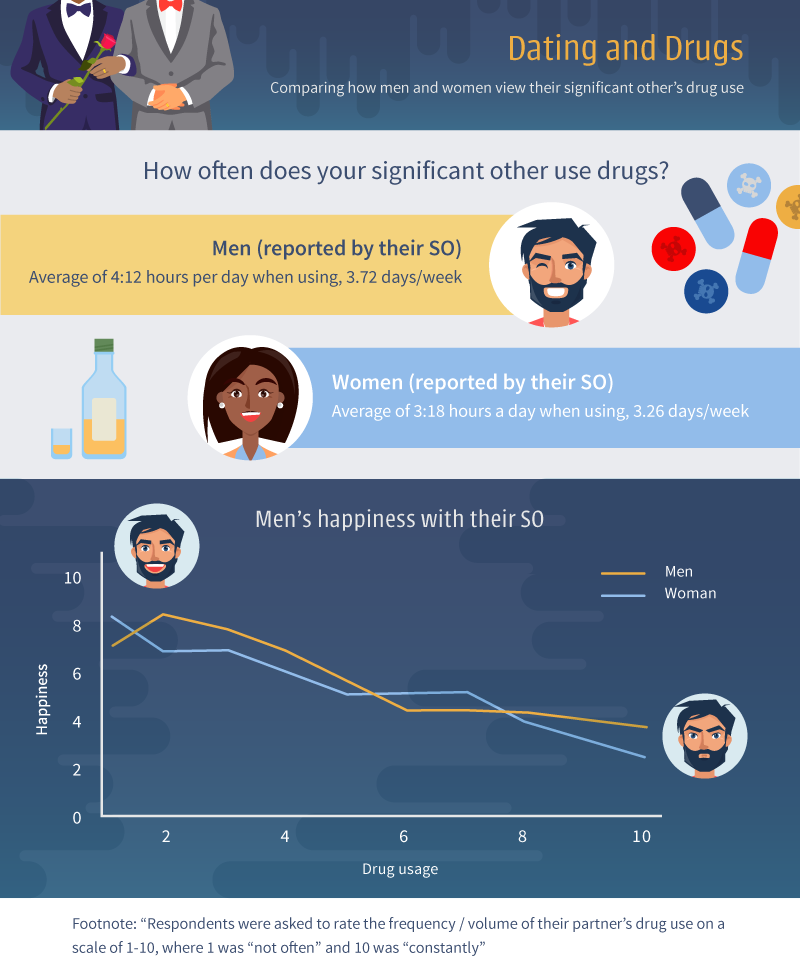 The Highs And Lows

Drug use doesn’t just pose a risk to your physical health or well being. Research often links drug addiction with co-occurring mental illness. Caused by overlapping factors including genetic makeup, stress, trauma, or even underlying brain defects, mental illness can lead to drug abuse in the same way that drug abuse can lead to the symptoms of mental illness. The same areas of the brain that are impacted by drug abuse are often connected to depression, schizophrenia, and other psychiatric disorders.

Both men and women we polled about their significant other’s substance abuse issues told us that, on average, their partners used drugs between three and four days each week. Men generally established a higher frequency of drug use, averaging over four hours a day compared to less than three and a half for women.

Our study also revealed that both men and women’s happiness in their relationships declined as their partner’s use of drugs increased. While people who reported only occasional drug abuse still rated their happiness between a 7 and an 8 on our scale, happiness with significant others struggling with constant drug abuse fell below a 3 for women and a 4 for men. 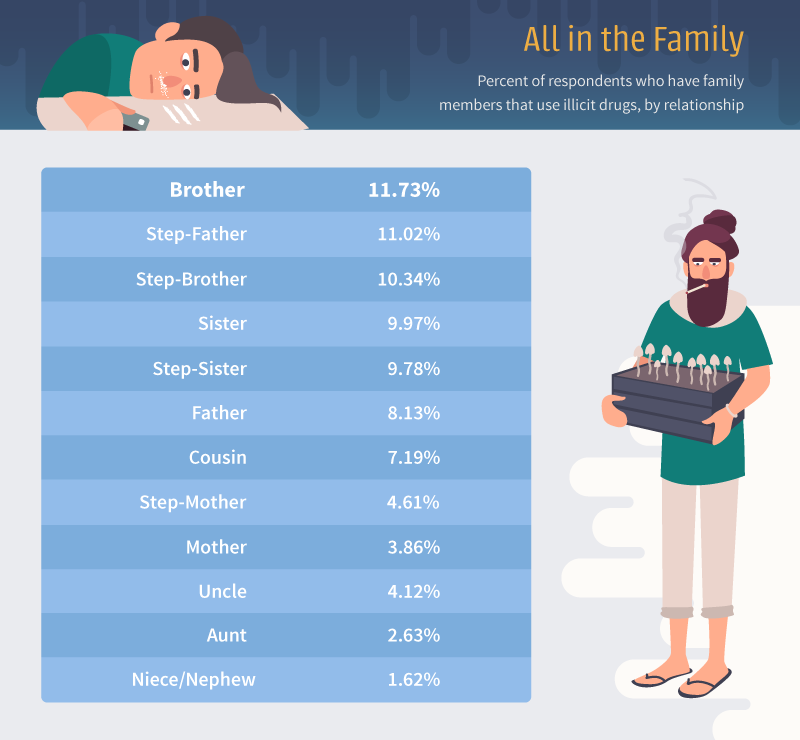 Many people want to know what causes addiction. It’s an age old question with no singular answer. Of the many factors that can contribute to a person’s likelihood of experiencing substance abuse or addiction, genetics don’t play a small role. Research has shown the genes we inherit from our parents account for roughly half our risk of developing alcoholism or addiction. This can lead to both drug dependency and relapse for millions of people through no fault of their own.

Of the people we polled across the country who’d experienced drug addiction in their lives, more than one in 10 told us their step-fathers had been drug users. Similarly, more than one in 10 people said their brothers or step-brothers had used illicit substances at some point and nearly one in 10 said they’d had similar experiences with their sisters and step-sisters. While less common, some Americans we polled told us their own fathers, mothers, and cousins had experienced a history of drug abuse at some point in their lives. 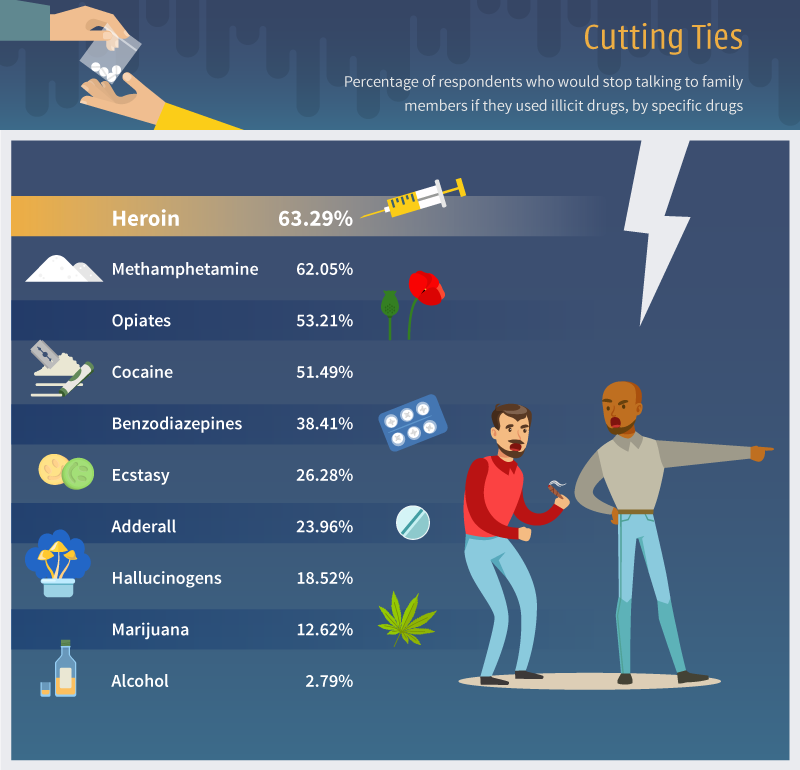 There is no blanket approach towards treatment for people suffering from substance abuse and addiction. Every person, their circumstances, and the environmental elements that impact their drug habits are completely different. One thing is for sure though, family support and involvement is a key element to overcoming addiction and finding true recovery. It’s not uncommon for family members to struggle with the addictive behaviors of a loved one or feel emotions like anger or resentment. Experts recommend that relatives can benefit from counseling sessions or support group meetings to help them address a loved one’s addiction and support both themselves and their loved one through the difficult process of recovery.

For some Americans, certain drugs were too extreme to consider keeping a family member in their lives who might be addicted. While less than three percent were willing to cut a loved one out of their lives who became addicted to alcohol, more than one in 10 admitted they would stop talking to a relative who had become dependent on marijuana. 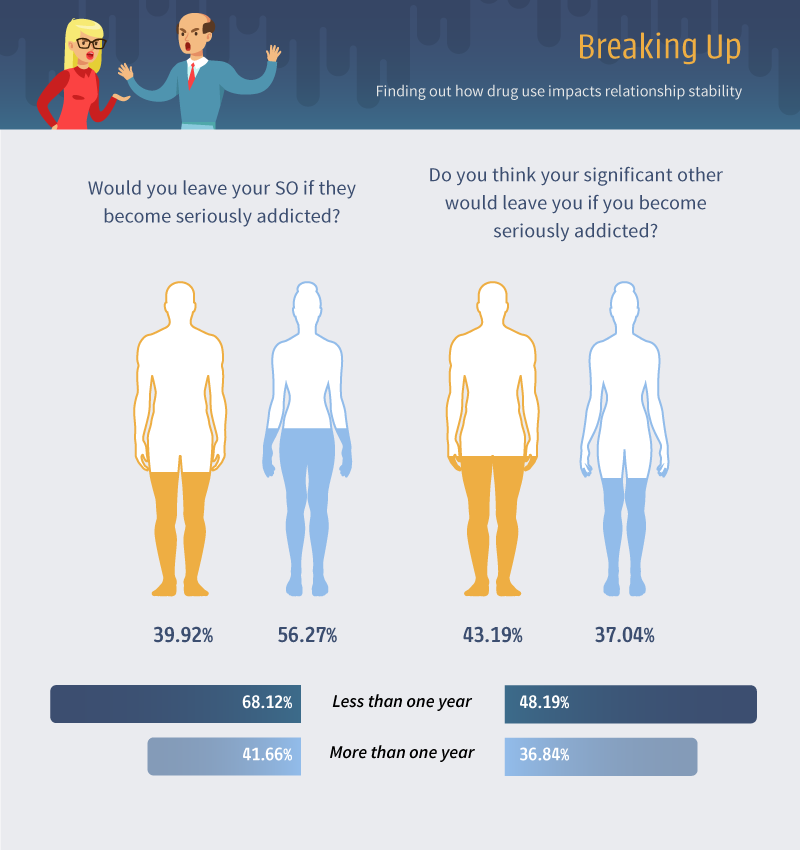 So how do drugs impact the relationships with people in our lives when we aren’t directly related to them? We asked Americans how likely they were to stay in a relationship with someone who’d become seriously addicted to illicit substances. As with nearly everything else regarding drug use – there was no one definitive answer.

More women than men told us they would leave a partner who’d become addicted to drugs. More than half (56 percent) admitted they wouldn’t stay in a relationship with someone suffering from substance abuse, and over a third expected their partners wouldn’t stay with them under the same circumstances. Men we polled were more likely to help their partners through addiction, but also more likely to expect their partners wouldn’t stay with them. For people overcoming substance abuse, even just the process of withdrawal can be challenging. Feelings of anxiety, body aches, nausea, and depression can occur while someone is struggling to take their life back after addiction.
The average length of the relationship played a role in how Americans expected they would react if their significant others became addicted, and relationships over a year typically led more people to stick around than short-term romances. 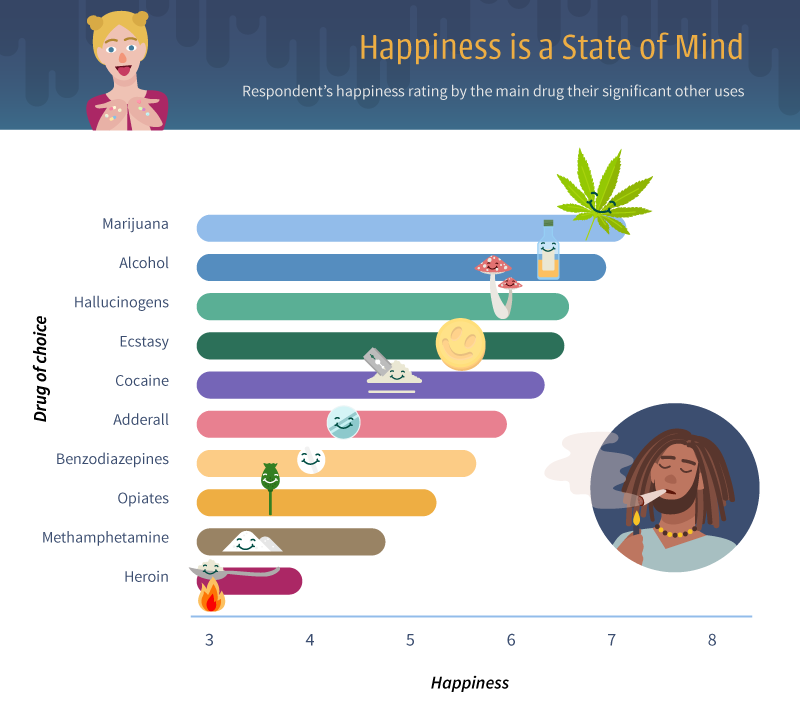 Drug abuse doesn’t just impact the mental state or happiness of the addicted person – we found their significant others sometimes suffer as well.

Americans whose partners used marijuana were typically the happiest of all rating at just over a 7 on our scale. While legal in various capacities across 29 states (including Washington D.C.) studies have shown marijuana isn’t exactly harmless. Short-term effects like mood swings, reduced body movement, and memory loss may fade, but long-term consequences can include lost mental abilities and reduced verbal and cognitive functionality.

People we polled who had experiences with their significant other and heroin abuse were the least happy by far. Rating themselves less than a 4 on average, only methamphetamines and opiates came close to the emotional toll caused by heroin use. Physical effects of heroin use can include heart and skin infections, higher risks of HIV and AIDS, collapsed veins, or pneumonia – all conditions a person might have to be cognizant of if their loved one was addicted.

In 2016, an estimated 64,000 Americans died from drug overdoses – a record high in the U.S. Of those, more than 20,000 were attributed to synthetic opioids alone and over 15,000 to heroin. For the people who knew them, their lives weren’t measured by addiction or substance abuse alone. All of them were someone’s son or daughter and many were siblings, partners, friends, co-workers, and even parents. Addiction is not an isolated occurrence, and it affects more lives every day than we may ever know.

If you or someone you love is battling with addiction, you are not alone. Addictions.com is here to help you find the best customized treatment and care options available. From interventions to detox and withdrawal, we’ll help you find support every step of the way. Our 24-hour addiction hotline, on-call health professionals, and best in rehab recommendations and reviews will help you find the care you need to start living your best life again. Help is waiting for you. Visit our rehabs page to find out if your insurance covers addiction treatment.

We surveyed 1,000 Americans (via Amazon’s Mechanical Turk) who reported that they and/or their significant other uses illicit drugs, and found out how that drug use impacts their relationships. We asked further questions to see how drugs impact their family and friends.