In 2014, the White House compiled a report on the money spent purchasing illicit narcotics across the U.S. every year. According to their study, American’s spent nearly a trillion dollars on drugs over the course of the last decade.

According to their research, while specific drug use fluctuated from year to year, the average amount spent remained consistent. In addition to these costs, the U.S. government spent an additional $40 to $50 billion each year in an effort to combat these trends.

To better understand how much money is really being spent by the average American on narcotics, we polled 1,000 drug users about their spending habits. In addition to which drugs are costing Americans the most amount of money, we discovered how much is being spent on a daily basis to obtain them, as well as the legal boundaries people had crossed to afford them. Read on to see what we learned about the real cost of drugs in the U.S. today.

What People Spend on Drugs 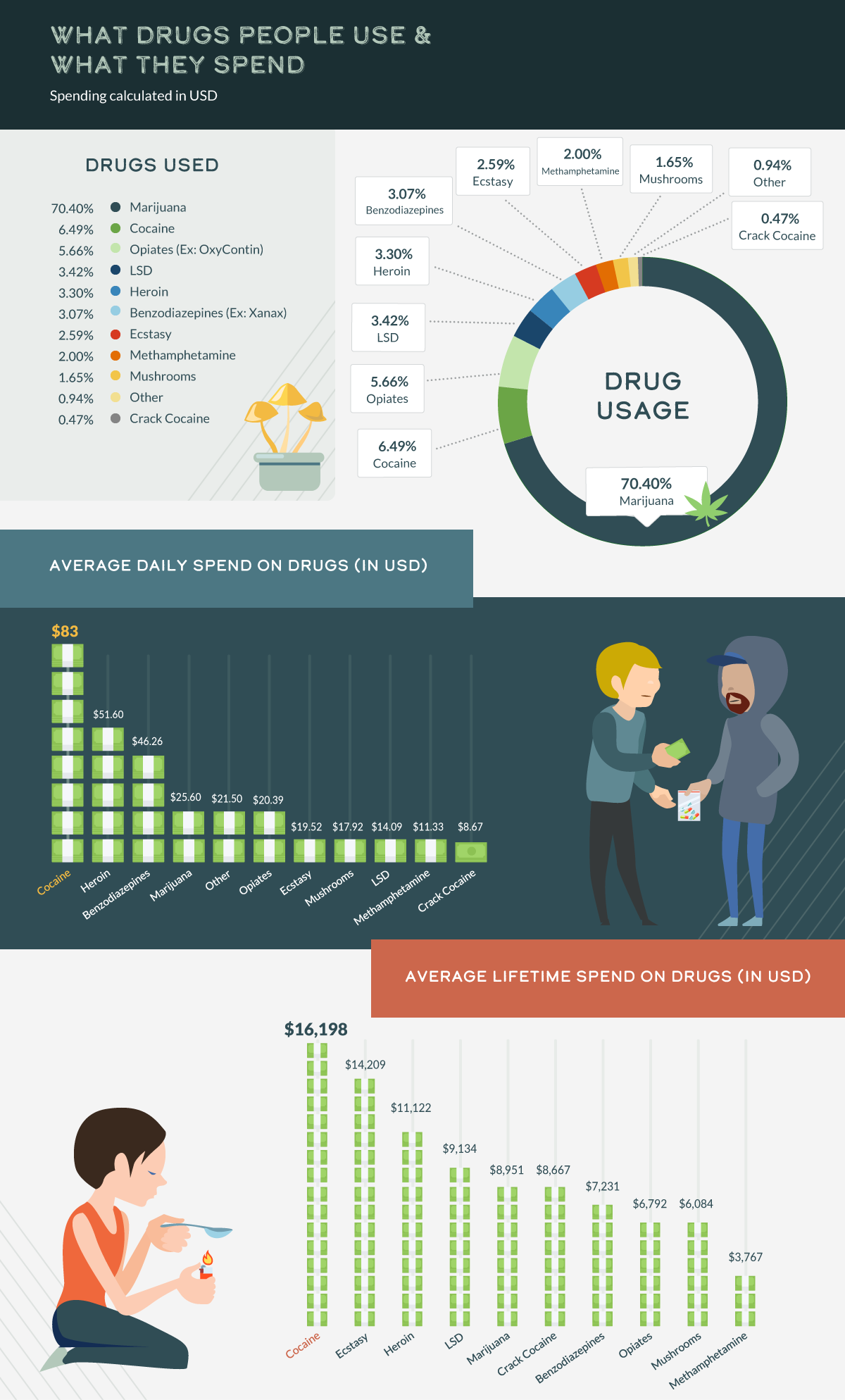 In 2014, the Obama administration released a report chronicling the total U.S. spend on illicit substances every year over an entire decade. In 2010, the last year the study analyzed, American’s spent over $100 billion on these drugs. That doesn’t include the financial impact on the communities these drugs affect, or the lost productivity of those who misuse these substances. 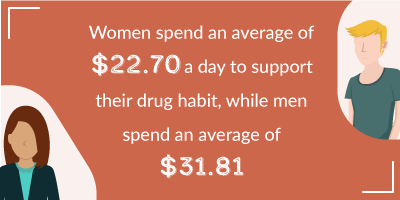 Of the 1,000 drug users we surveyed who acknowledged at least one misused substance in the past 12 months, more than 70 percent told us they’d used marijuana at least once. While some states across the country have legalized marijuana for various purposes, including recreational use, the National Institute on Drug Abuse indicates that misuse of marijuana can lead to dependence, and that nearly a third of those who use marijuana develop some degree of marijuana use disorder. Their daily spend eclipsed $25 a day, equating to nearly $9,000 a year.

The use of powerfully addictive stimulants like cocaine accounted for less than seven percent of those we surveyed, but they spent more than three times the amount of money on drugs every day than those who told us they’d missed substances like marijuana, opiates, or ecstasy. At more than $83 a day on average, a person who becomes dependent on cocaine could spend more than $16,000 over the course of their lifetime on obtaining the substance. 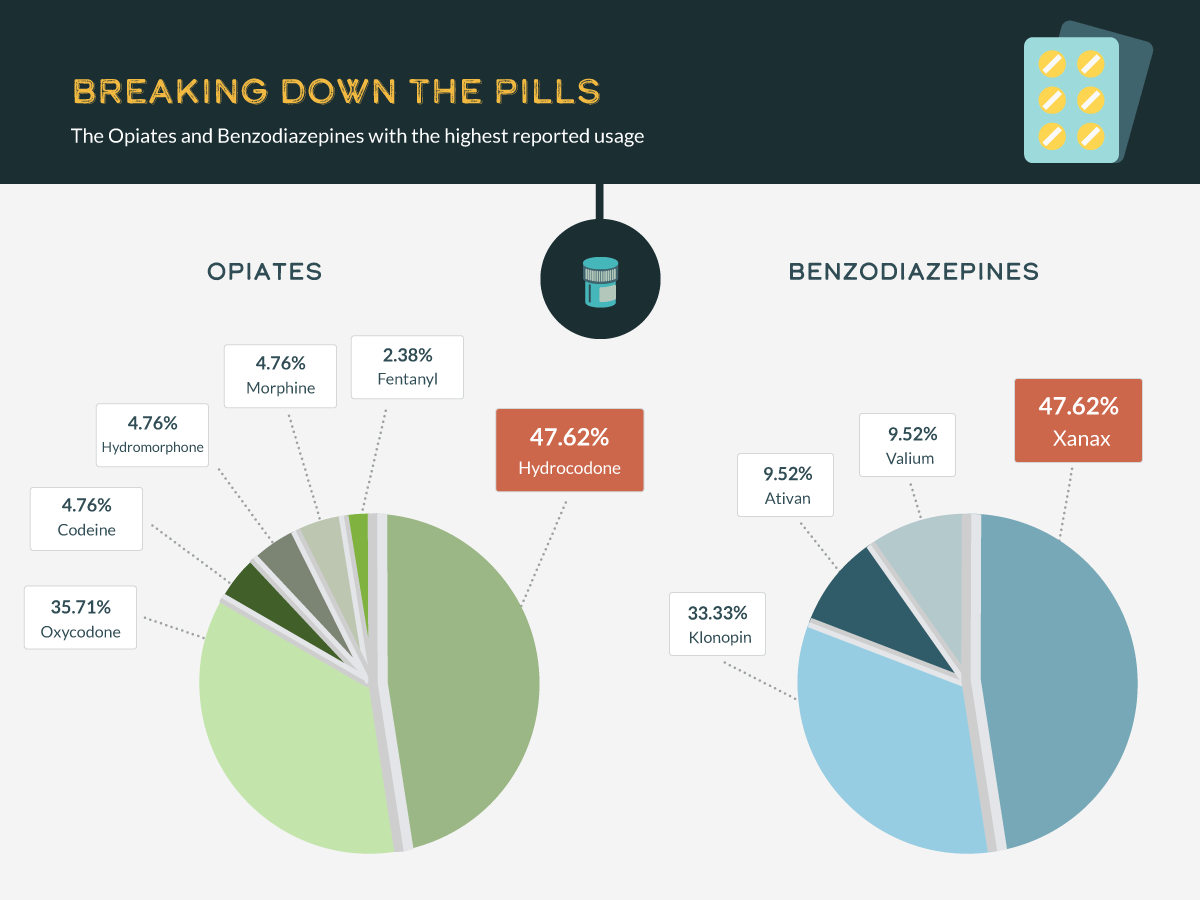 In 2015, spending on prescription drugs climbed 12 percent to a record high of $425 billion across the country. As spending and distribution have risen significantly over time, the misuse of prescription drugs in a non-medical capacity have also grown to record levels.

Prescription opiates including hydrocodone, oxycodone, and fentanyl are responsible for nearly half of U.S. opioid related deaths. Of these drugs, hydrocodone substances like Vicodin were the most common among those we surveyed, accounting for almost 48 percent of total opiate misuse. Oxycodone substances like Oxycontin and Percocet totaled more than a third of opiate misuse, while fentanyl substances accounted for less than three percent of total use.

Among those who told us they’d misused Benzodiazepines, which like opiates can be highly addictive, almost 48 percent reported using Xanax, compared to a third who acknowledged misusing Klonopin. Ativan and Valium each account for less than 10 percent of total Benzodiazepine use.

What People Are Spending Each Day 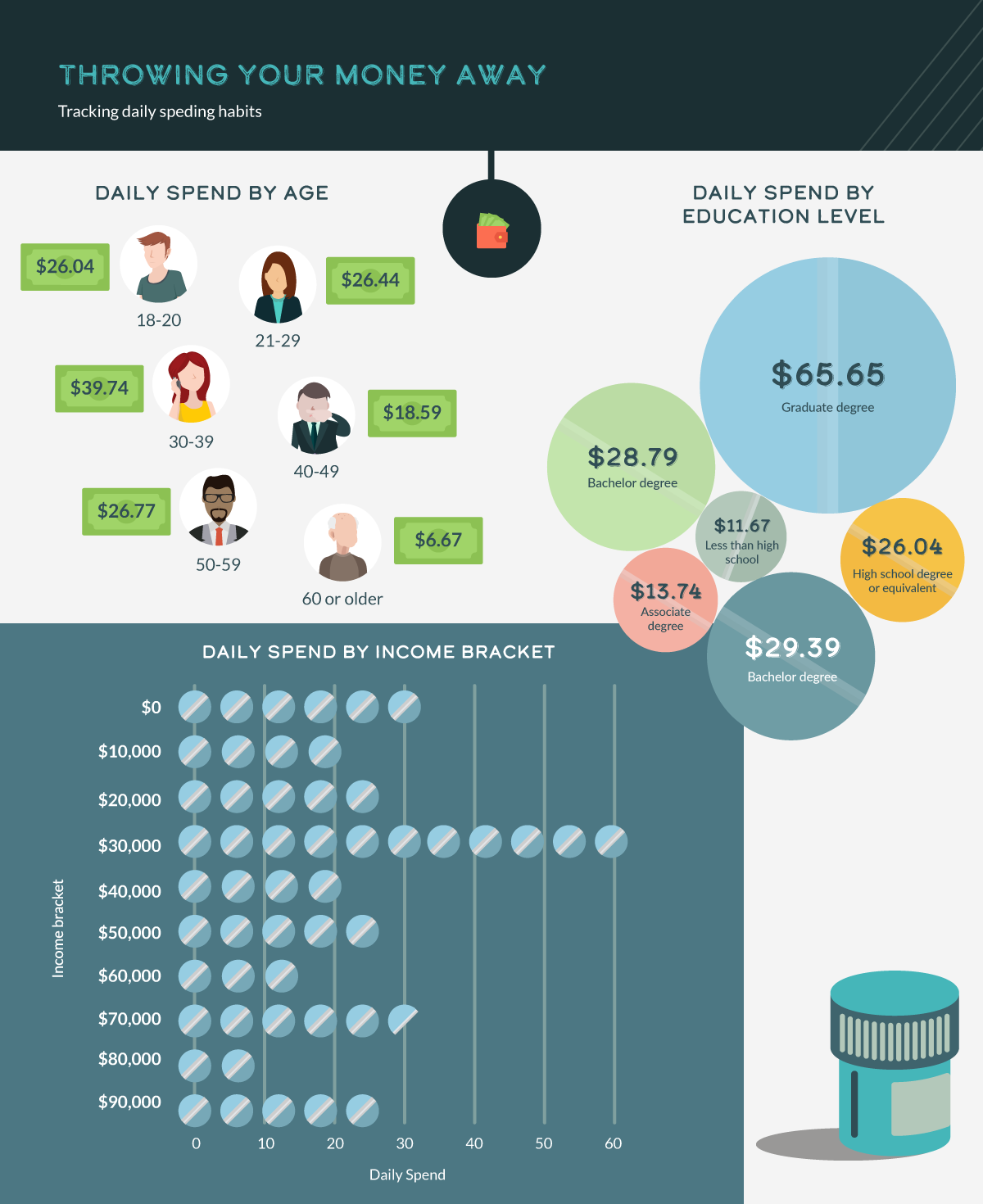 Our survey found that of the 1,000 participants who shared their experiences with drug misuse, those with higher levels of education spent more per day on average to acquire illicit substances than those who were less educated.

While participants without a high school diploma (or equivalent) told us they spent nearly $12 a day on drugs, those with a high school degree acknowledged spending more than twice that amount, and survey respondents with a bachelor’s degree spent more – averaging almost $29 a day.

Those with a graduate degree identified spending the most on daily drug use out of everyone we surveyed, averaging nearly $66 every day.

By age, those between 30 and 39 years old had the highest average spend on illicit substances, costing them nearly $40 every day, and participants earning between $30,000 and $40,000 annually were more likely to spend more on drugs than those made more or less. 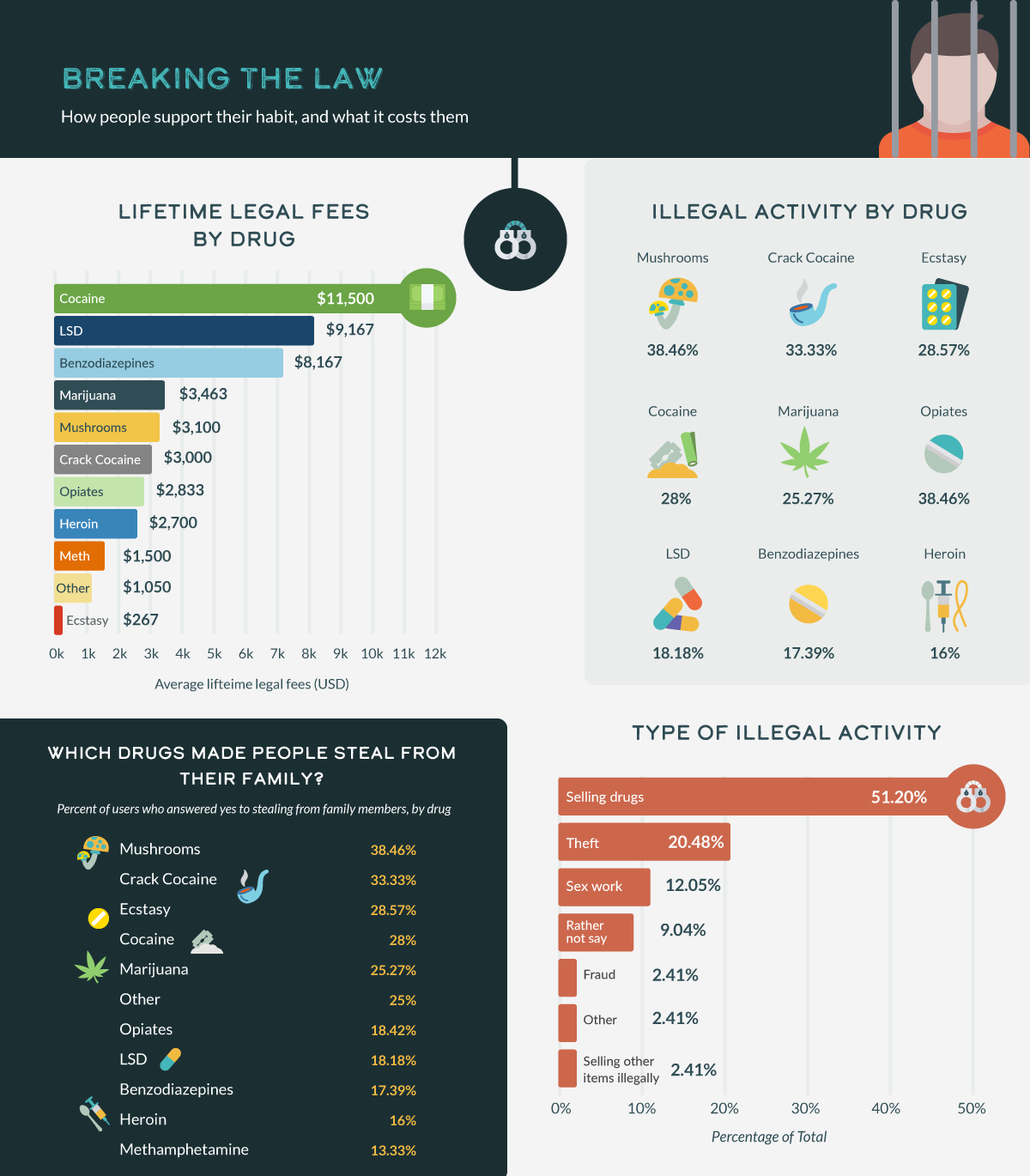 Our study found that even those who reported earning less than $10,000 a year still spent over $30 a day on average to acquire drugs. Given the cost of obtaining these illicit substances, we asked our participants what lengths they 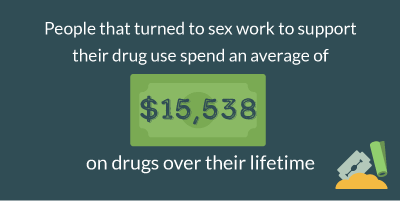 had gone to in the past in order to afford them.

Some told us they had stolen from friends and family to fund the illegal purchase of narcotics. More than a third of those who said they’d used mushrooms or crack cocaine in the past also told us that they’d stolen from people in their lives to pay for these substances while more than one in five who had misused cocaine and LSD  said the same. 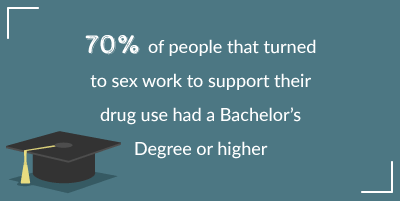 Over half also said the they’d sold drugs themselves in order to be able to purchase them, and more than one in 10 people who’d engaged in illegal activity to buy drugs said they’d participated in sex work. The chronic misuse of substances like cocaine and heroine can negatively impact the area of the brain that controls decision making, potentially leading to tragic, and costly, mistakes. 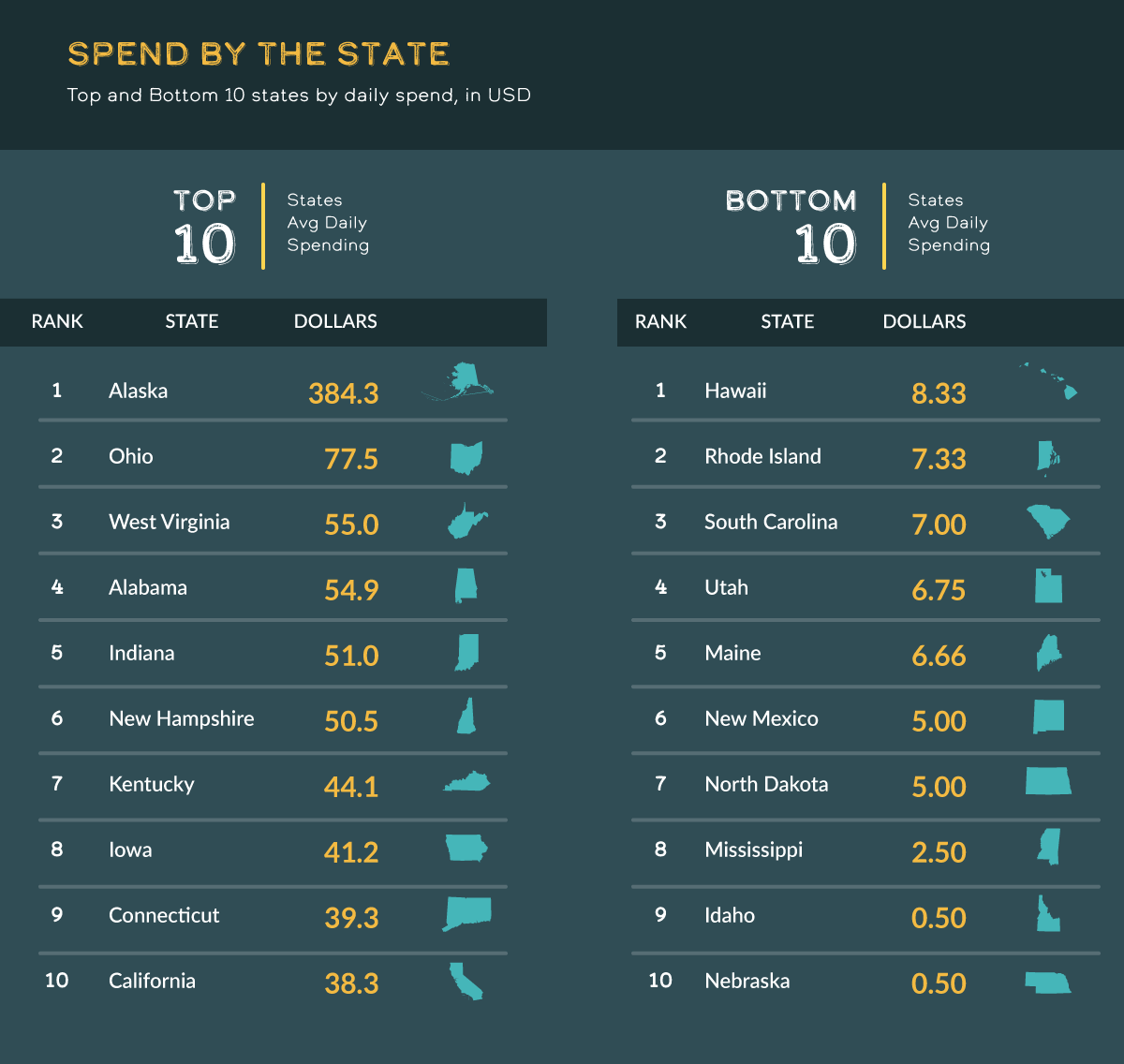 Across the U.S., survey participants told us that some states were spending more every day for illicit narcotics than others.

Those we polled from Alaska identified that their average daily spending for drugs was over $384 – nearly five times the next highest state spending. At the time of this writing, Alaska state officials are currently grappling with ways to combat a growing heroin misuse epidemic. Across the state, deaths from heroin use increased by nearly three times over a five year span between 2008 and 2013.

States like Ohio (over $77), West Virginia ($55), and Alabama ($54) had high rates of daily drug spending as well. In Ohio, opioids like heroin are also partially to blame for the cash spent across the state on drugs. In 2017, a single Ohio county experienced 46 deaths due to fatal overdoses in a single month.

States with the lowest overall average spending included Nebraska, Idaho, and Mississippi, where money spent per day on drugs averaged less than $3 according to those we surveyed.

More money is spent on illicit drugs daily and yearly than anyone – from the United States government to the loved ones watching someone struggle with addiction – would want to see. With over a trillion dollars spent on these substances, the drug problem hasn’t disappeared. Upon further examination, communities across the country are calling out for help.

Answer that call of a friend or loved one who needs help, whether they can see if for themselves or not, by connecting with Addictions.com for an immediate referral to trusted rehab centers. Start breaking the cycle today.

We surveyed 1,000 drug users to find out their daily drug spend, and broke down the results by drug type as well as various demographic data. When looking at state level data, we excluded any states with less than 10 responses. We also excluded any outliers that were clearly unrealistic, like a 18-19 year old saying they have spent $99million on drugs so far, or someone saying they spend more than their yearly income each day.

Please feel free! All that we ask is that you include a reference back to this page so your readers can view the full study.