Health experts have called the opioid epidemic in the United States the worst drug crisis in history, killing more than 33,000 people across the country in 2015 alone. Of those deaths, more than a third were attributed to a single narcotic: heroin.

To better understand the impact heroin is having across the country, and which states may have been struck hardest by this deadly substance, we surveyed 2000 drug users across the country about their experiences with heroin. From their first impressions with heroin to their experiences with rehab and overdosing, we learned first-hand how heroin is affecting Americans all around us. Read on to see what we discovered. 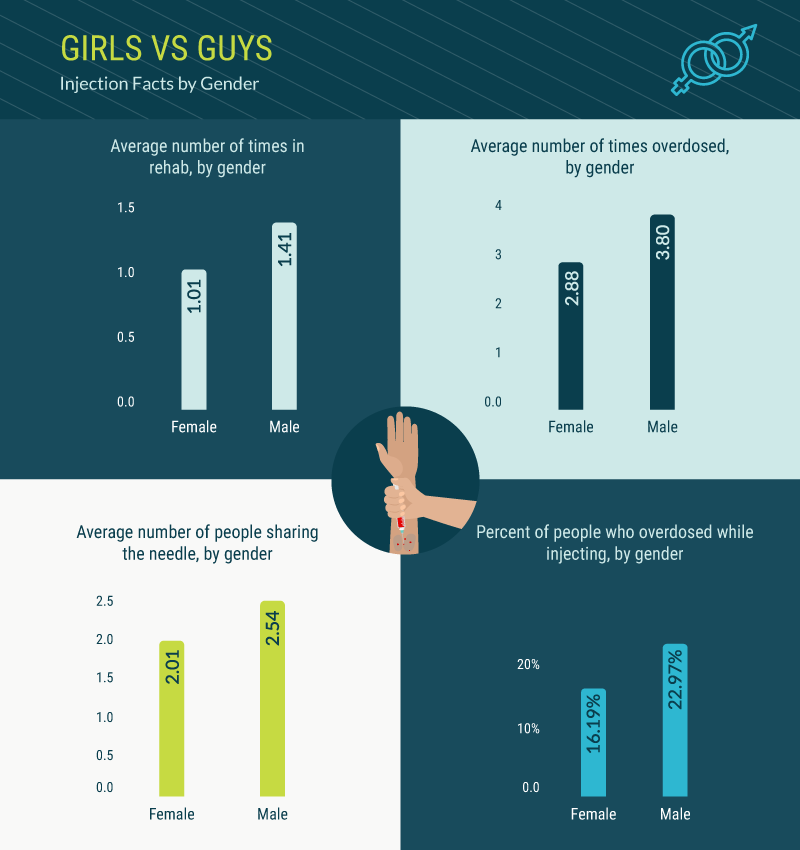 It’s not just those addicted to heroin who overdose –  a heroin overdose can happen quickly and under the same circumstances as a person’s previous experiences with the same drug. According to the CDC, a heroin overdose can include shallow breathing, coma, and even death.. Some have described hallucinations associated with their overdose experiences, extremely delayed cognitive function, and seizures.

With over 2000 Americans surveyed, we found that men who used heroin across the country admitted to having overdosed nearly four times on average while women said they’d overdosed nearly three times. Of those people, close to one in four men said they overdosed while physically injecting heroin and more than one in 10 women said the same. Typically people we polled indicated two or more people shared the same needle while injecting the drug.

Withdrawal symptoms of heroin can sometimes be as nasty as the effects of overdose. Peaking within 24 to 48 after the last dose, some heroin users may feel the effects of withdrawal for weeks or months after consumption.  Most Americans we surveyed indicated they’d been to rehab for drug abuse at least once in their lives. 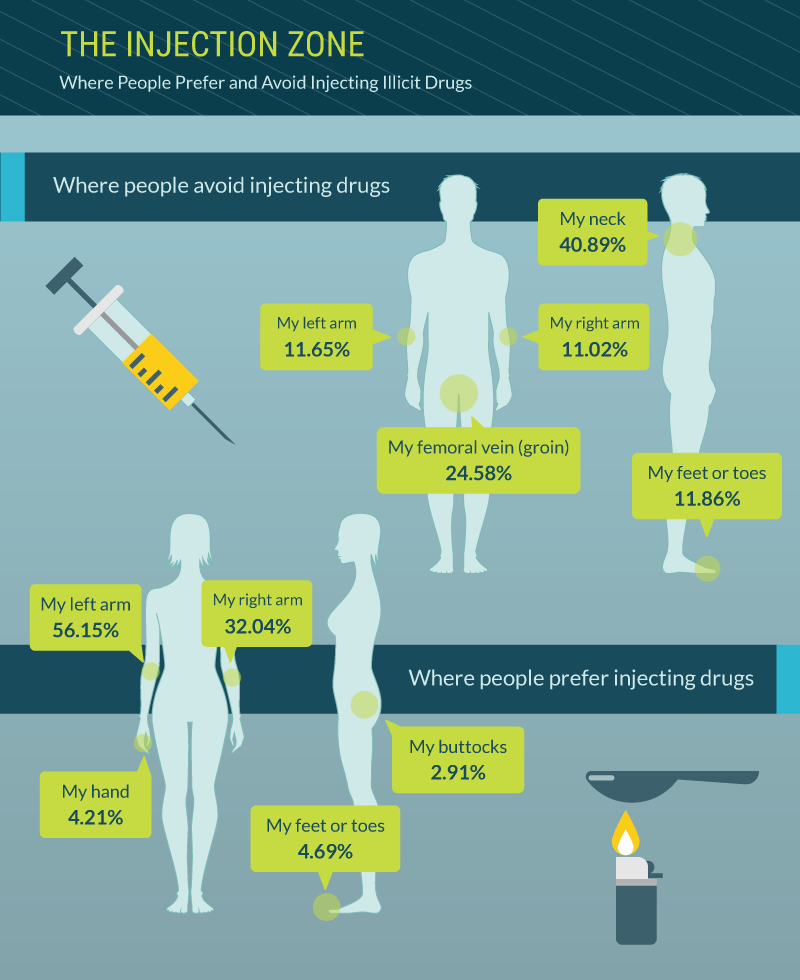 Further complicating the multifaceted reality of opioid use in America, there’s not just one single way to consume heroin. While typically injected, the drug can also be smoked or snorted. For those choosing to inject heroin, there can be even more long-term serious health risks including HIV, Hepatitis C and B, as well as bacterial infections in the skin, heart, and bloodstream.

Just as there’s no one way to consume heroin, for those injecting drugs there’s no one primary place on the body to inject. For a majority of Americans using drugs intravenously, our survey found both arms were the most common injection sites while less than one in ten people told us they prefered injecting into their feet or toes, hands, or buttocks. Furthermore, two in five indicated they typically avoided injecting into their necks, while more than one in ten said they avoided their arms completely.

In response to the dangers of injecting narcotics, some cities across the U.S. are researching the potential advantages of safe spaces for Americans to inject drugs like heroin to help supervise their use. Currently used in other countries around the world, these facilities help prevent overdoses and needle sharing while connecting users with local drug treatment options. 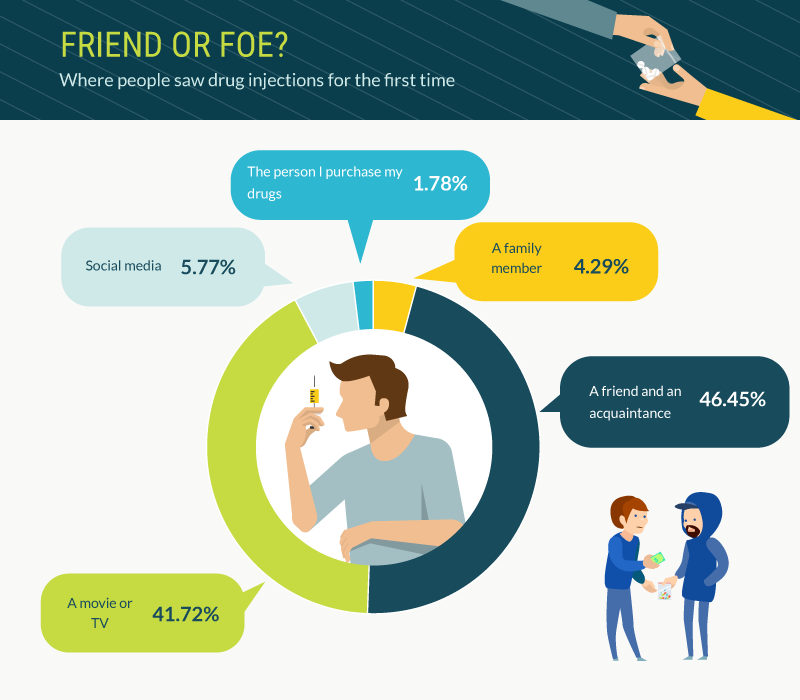 Like other chronic conditions, additional research has shown genetic factors could make some Americans more prone to drug addiction than others. While no one gene in the body controls substance dependency, studies have shown genetics can attribute to as much as 50 percent of risk for drug and alcohol addiction. Family history can also have a significant impact on a person’s relationship with narcotics and how they’re exposed to drug use for the first time.

Keeping it among friends and family, more than half surveyed shared they first experienced drug injections with either a family member, friend, or other acquaintance. Studies have shown communities that provide healthy after-school activities for children are able to reduce the impact of drug addiction while exposure to drugs in a person’s social (or cultural) environment can change the genetic expression of addiction. Simply put, both nature and nurture can play a significant role in the likelihood of becoming addicted or dependent on drugs.

Of course, real-life examples aren’t the only way Americans are exposed to drugs. Close to 42 percent of respondents told us their first experience with drug injection was through a movie or on TV while nearly seven percent said it came from social media. 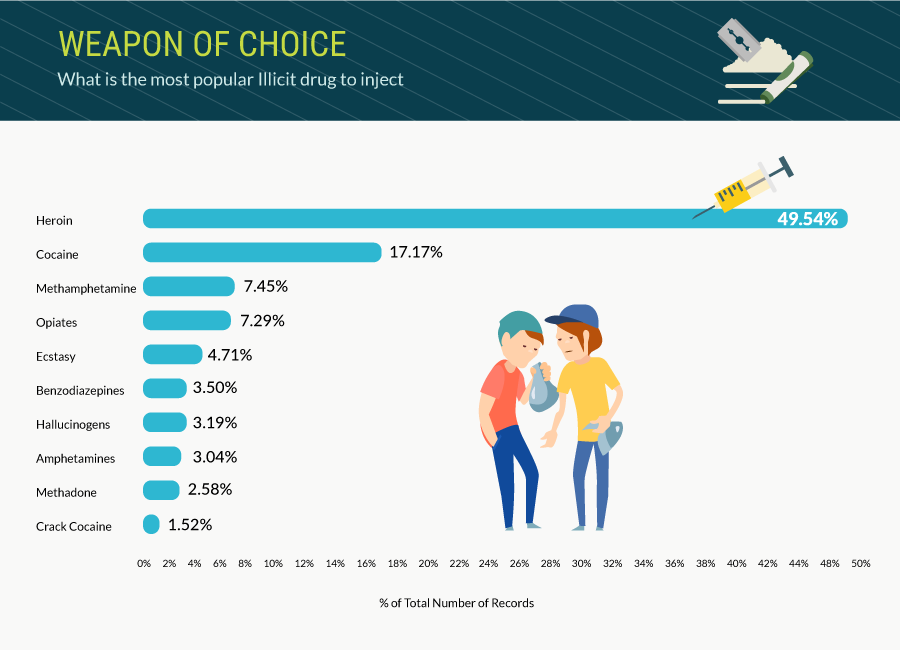 The Many Faces Of Drug Injections

Drug injections aren’t specifically reserved for heroin. Americans we polled with a history of drug abuse admitted to injecting substances ranging from methamphetamine and ecstasy to hallucinogens and cocaine. Of those intravenously consuming narcotics nearly half indicated they’d injected heroin at least once.

While the misuse of some opioids (including hydrocodone and oxycodone) has increased steadily over the last two decades, heroin and synthetic opioids like fentanyl have seen a dramatic and accelerated increase in the number of deaths attributed to their use in recent years. In 2015, the number of people who died from heroin use surpassed the number of people killed in gun related homicides for the first time in U.S. history. 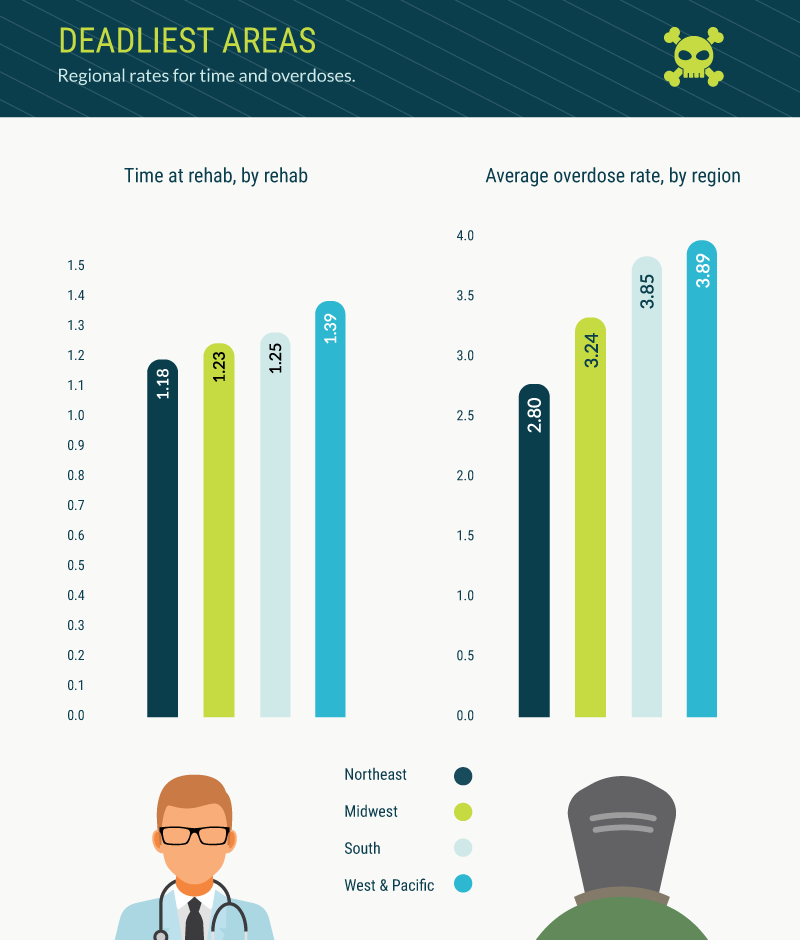 Our survey found that some areas of the U.S. may be more impacted by drug abuse and overdoses than others. People we polled from the Midwest and Pacific states (including California, Colorado, and Ohio) told us they’d overdosed an average of nearly four times. While nearly 2,000 people died from opioid abuse in Massachusetts in 2016 (a rate nearly double that of 2013), Americans we surveyed from the Northeast had the lowest average experience with drug overdoses – nearly three on average.

Our study also found that overdose rates didn’t directly correlate to the likelihood of seeking support through rehab facilities. While Americans from the Midwest nearly tied for the average number of overdoses across the country, they were generally less likely to participate in rehab than people from Western Pacific states or the South. For some, the fear of failure, rejection, and even sobriety itself can be key reasons why addiction recovery or rehab can feel so frightening. In reality, half of recovering drug users will relapse at some point – but that doesn’t necessarily indicate failure. Across the country, more than 23 million Americans have recovered from drug and alcohol misuse with the help of professional care and rehabilitation. 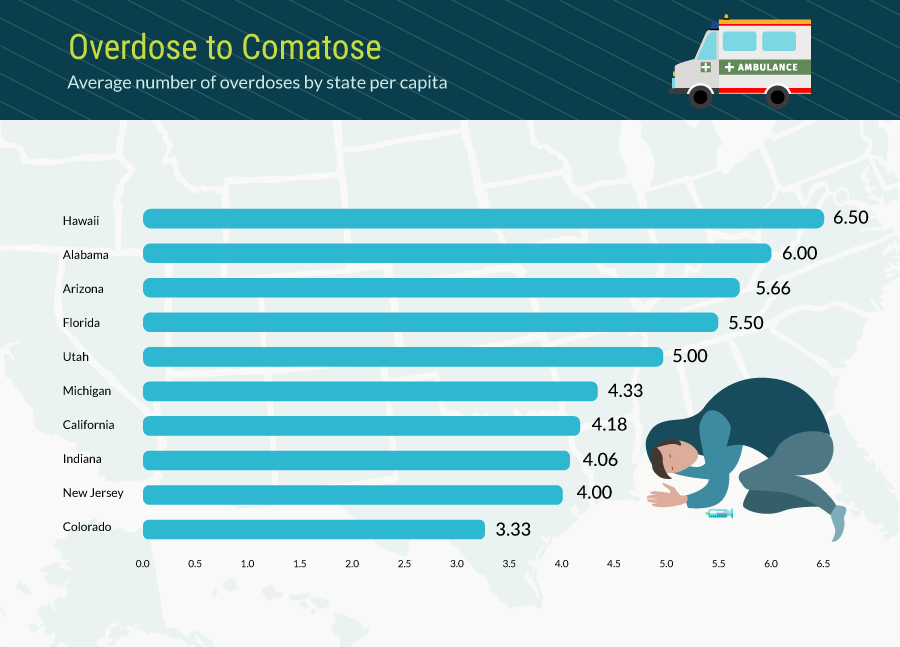 A Nation In Crisis

According to our survey, Hawaii had the highest overdose rate per capita anywhere in the country. Like other states across the country, Hawaii has seen an uptick in the number of overdoses attributed to opioid misuse. In 2016, the statewide fatality rate of opioid overdoses nearly doubled that of 2000, and as state officials began cracking down on prescription opiates, many turned to heroin instead.

Following Hawaii, people we polled from Alabama, Arizona, and Florida also indicated higher rates of drug overdoses than anywhere else in the country. Arizona was identified by one study as being among the top-10 worst states in the country to be impacted by drug abuse. In January 2017, 191 people in Arizona overdosed from opioids and 15 died in just one week.

As the number of Americans impacted by opioids continues to rise, some cities and states are changing their approach to low-level drug offenders. Rather than sending them to jail (where they often fail to receive the necessary care to overcome addiction), some parts of the country are moving away from punishment and towards treatment as a response to drug use in the U.S. While these programs may have received some criticism from law-enforcement officials, they remain focused on keeping drug users out of the criminal justice system and reducing the stigma of addiction. 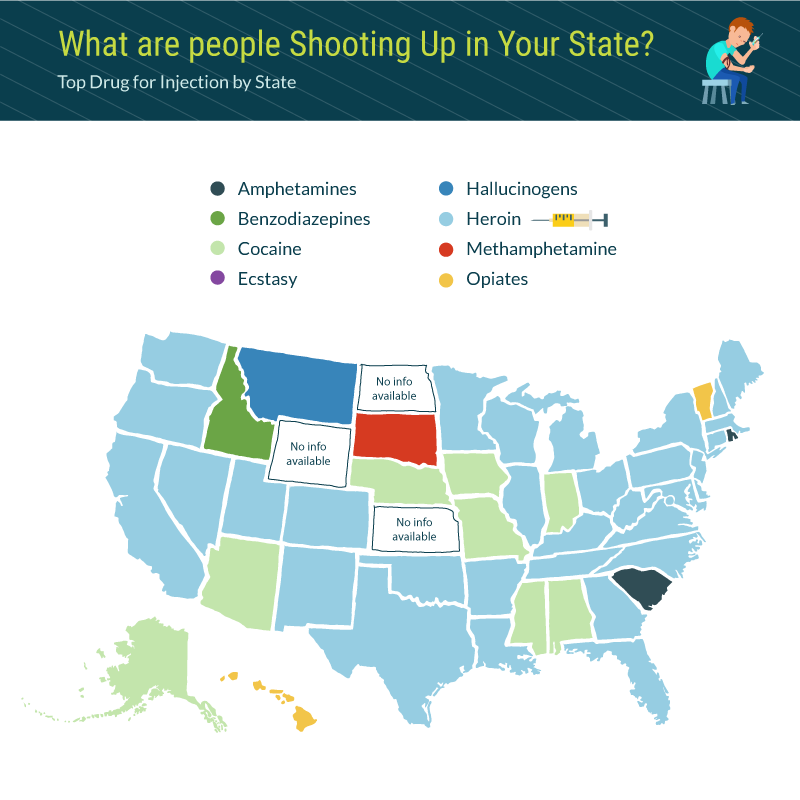 As our study has shown, the face of the drug crisis in America can look different from region to region, state to state, and even community to community. As law-enforcement officials set their sights on a particular substance, some cities and states have reported trends of new substances emerging in their place.

Across the U.S., the way Americans are using and misusing drugs is changing. In recent years, the number of people killed by overdosing on drugs like methadone have effectively decreased, while natural and semi-synthetic opioid overdoses are increasing at a slower rate than they were five years prior. In contrast, synthetic opioids (excluding methadone), heroin, and even cocaine overdose deaths have increased exponentially over the last three years.

Thankfully the way Americans are talking about the drug crisis in the U.S. is also changing. The stereotypes of who can be affected by heroin addiction are falling away and have helped introduce new ways of thinking about how we respond to – and treat – substance abuse. Some city and state officials are looking at drugs as a health issue first rather than a criminal activity.

If you or someone you know is battling with addiction, help is here for you. At Addictions.com, we know that the path to recovery is different for everyone. From understanding the need for addiction treatment, to approaching sobriety and withdrawal, we believe in helping you find a treatment plan that can help avoid relapse in recovery. By connecting you to the top rehab centers across the country you’ll be able to take the first step towards living your best life today. Visit us online at Addictions.com now to learn more.