Life on the Streets – How substance abuse relates to homelessness

In 2016, there were more than half a million homeless Americans across the country. Of those, nearly one in three individuals and roughly three percent of people in families were without shelter.

While that number has been in decline over the past decade, some reports indicate that establishing a true figure for the men, women, and children without homes in the U.S. may be more complicated to establish, and thus inaccurate. Hundreds of thousands of homeless Americans in the U.S. are veterans, young adults, LGBTQ youth, elderly, and ill. 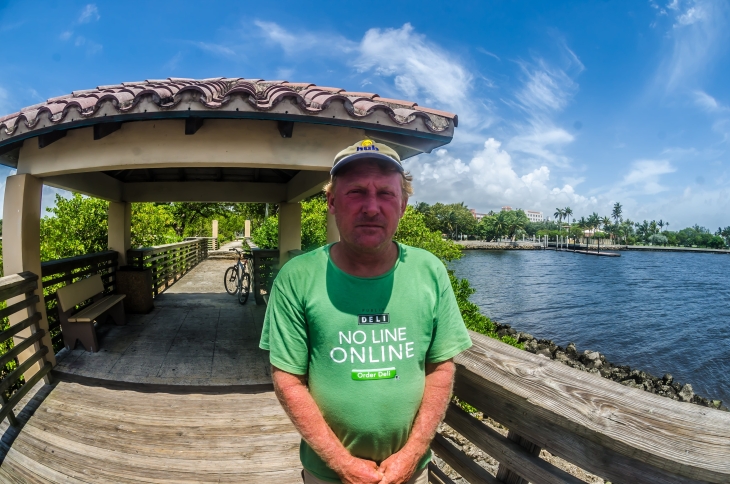 Meet Randall, a man calling the streets of South Florida his home. We interviewed 25 homeless people across South Florida to learn who makes up our homeless community, where they came from, how they got here, and the role that drug and alcohol addiction may be playing in their daily lives. 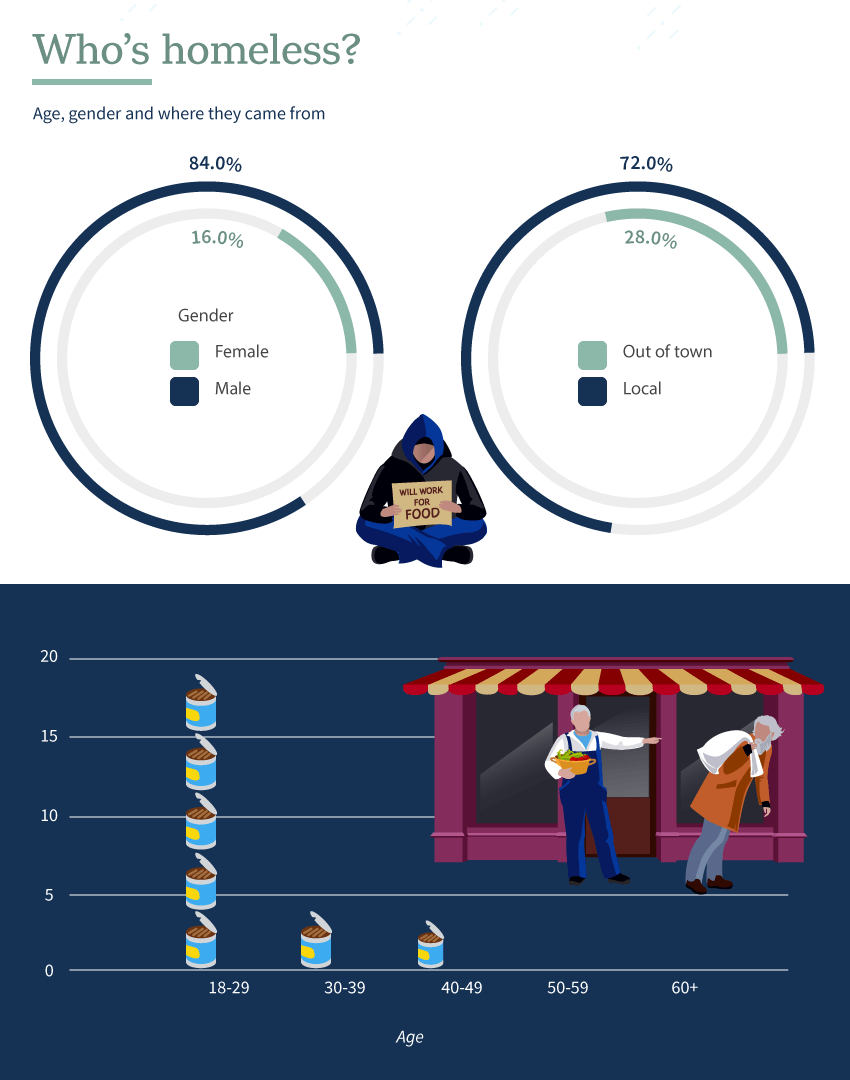 Who Are Our Homeless Citizens?

Overwhelmingly, a majority of the homeless population we interviewed in South Florida were comprised of men – 85 percent in fact, compared to only 15 percent who are women. While a minority, women represent the fast growing population of the homeless community and Their marginalized presence today creates unique challenges for their ability to find basic care and support. Sanitary products and basic mental health care are often limited and difficult to find, in addition to those who are pregnant or already have children of their own.

Nearly three out of four are local to the area they’re currently in, while over a quarter have traveled from other cities or states to their current locations. In states like Colorado, where the homeless population has risen nearly 10 percent since 2013, the availability and decriminalization of marijuana is suspected to be at least partially responsible for the rise in homelessness in recent years.

While a majority of homeless Americans we surveyed were over the age of 60, nearly one in five was between the ages 18 and 29. Across the country nearly 10 percent of the homeless community are identified as military veterans, a number that has drastically decreased over the last decade. Young people who find themselves living in homeless shelters or on the streets are often the products of dysfunctional or violent homes, or a product of the U.S. foster care system who have “aged out” of the program, making them effectively homeless. 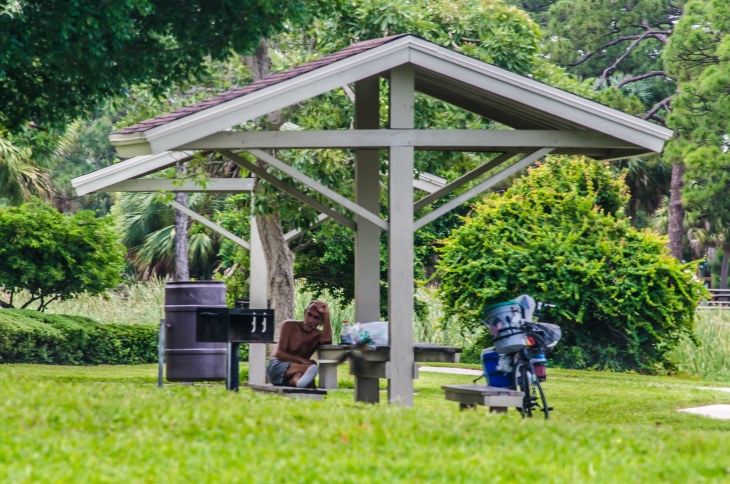 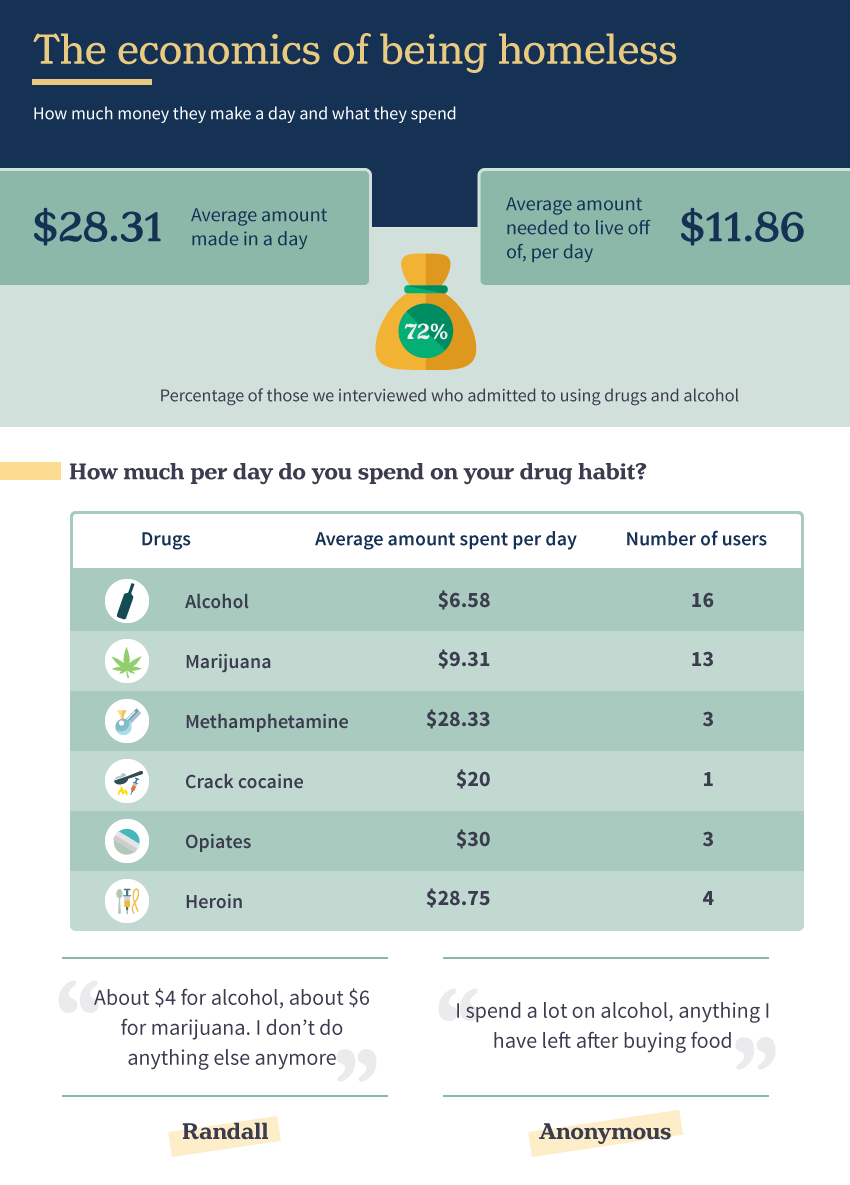 Of the homeless people we interviewed in South Florida, nearly three out of four admitted using drugs, alcohol, or both to us over the course of our study. While they earned just over $28 a day on average from the various jobs they told us they participated in (including panhandling), they indicated needing less than $12 per day to survive. Of course, these figures fail to account for the thousands of dollars spent by the U.S. government on various expenses that could be reduced over time by providing permanent housing and jobs skills.

According to the Substance Abuse and Mental Health Services Administration (SAMHSA), roughly two in three Americans experiencing chronic homelessness suffer from substance abuse disorders, which can prevent them from finding affordable, subsidized, or consistent housing. A majority of people we polled admitted to consuming alcohol, and spending less than $7 per day on the habit. A slightly smaller percentage also told us consumed marijuana (currently illegal in the state of Florida at the time of this writing), and spending just over $9 each day on it. An extremely small percentage of homeless Americans we interviewed admitted using drugs including methamphetamine, crack cocaine, or opiates – while those who did indicated spending more each day on them than the averaged amount earned. 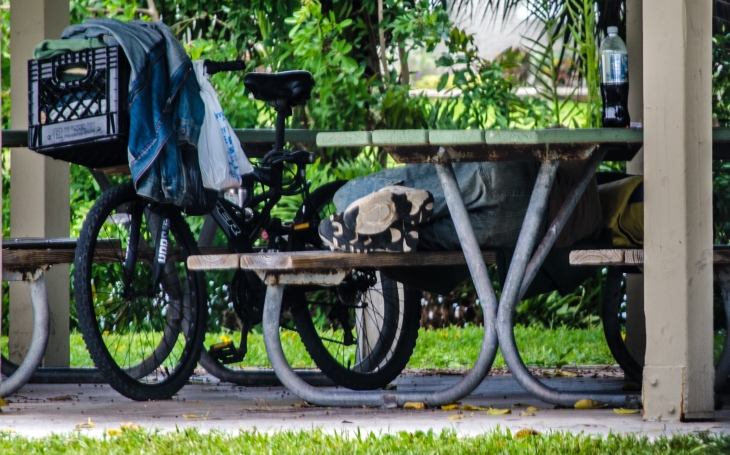 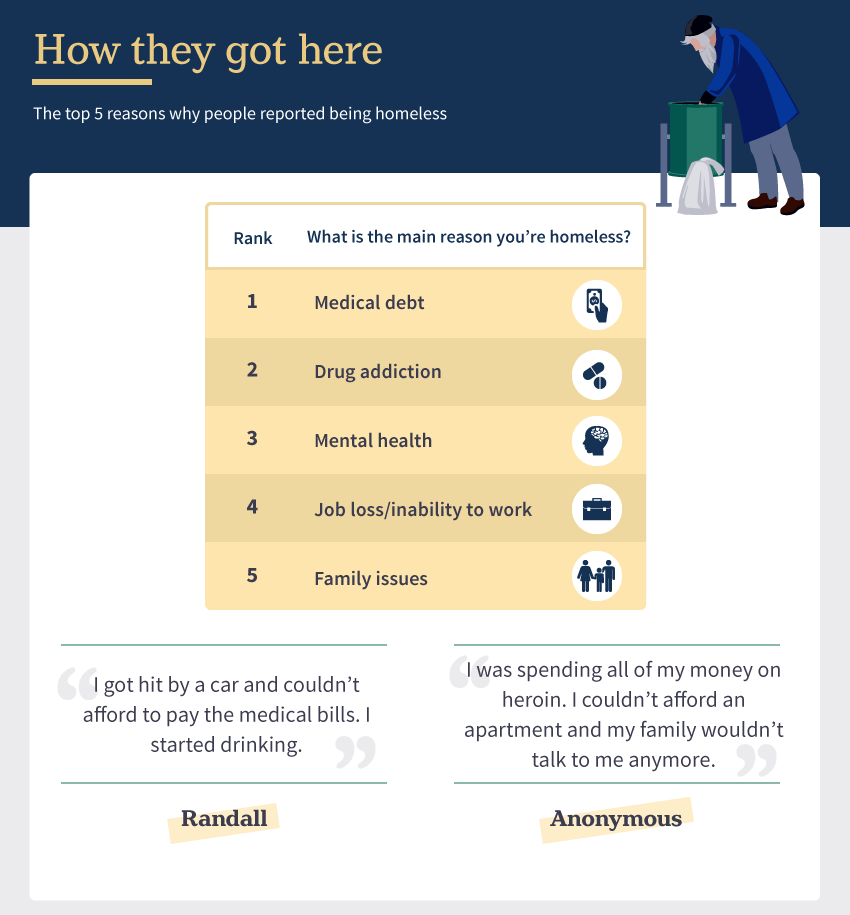 How the Homeless Become Homeless

The most common cause of homelessness among the people we interviewed wasn’t drugs or alcohol – though drug addiction also ranked below the leading response. The Americans we surveyed pointed to medical debt as the fundamental element of their financial burdens. According to recent studied, 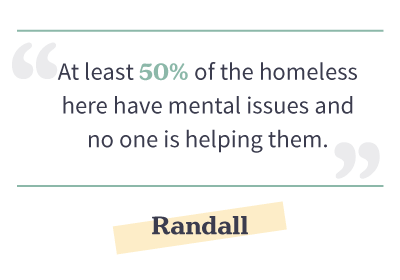 one in five Americans with health insurance struggles to cover their medical bills resulting in serious financial challenges. Roughly a third also withdraw money from their savings, retirement, and children’s college accounts to help cover these costs.

People we spoke to also indicated that mental health issues were a leading cause of their homelessness. The U.S. Department of House and Urban Development once reported that roughly one in five homeless Americans suffered from severe mental health issues, which can be managed with the right care, but when left untreated can develop into debilitating conditions.

Job loss and family issues also ranked among the five most common responses we received when asked about the reasoning behind their living scenarios. 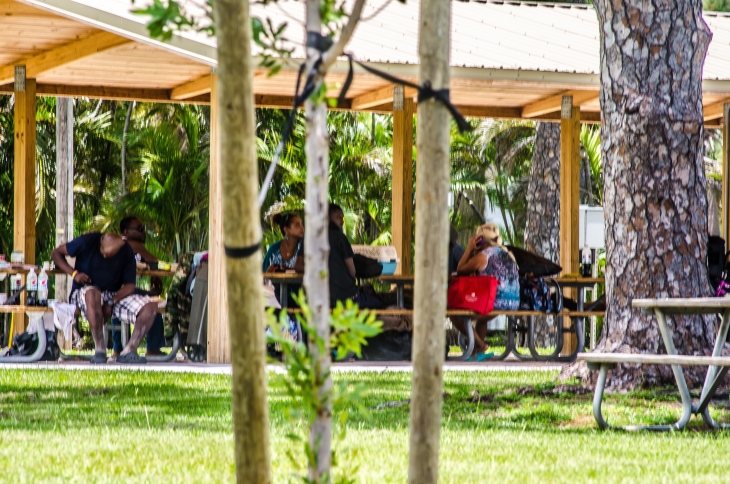 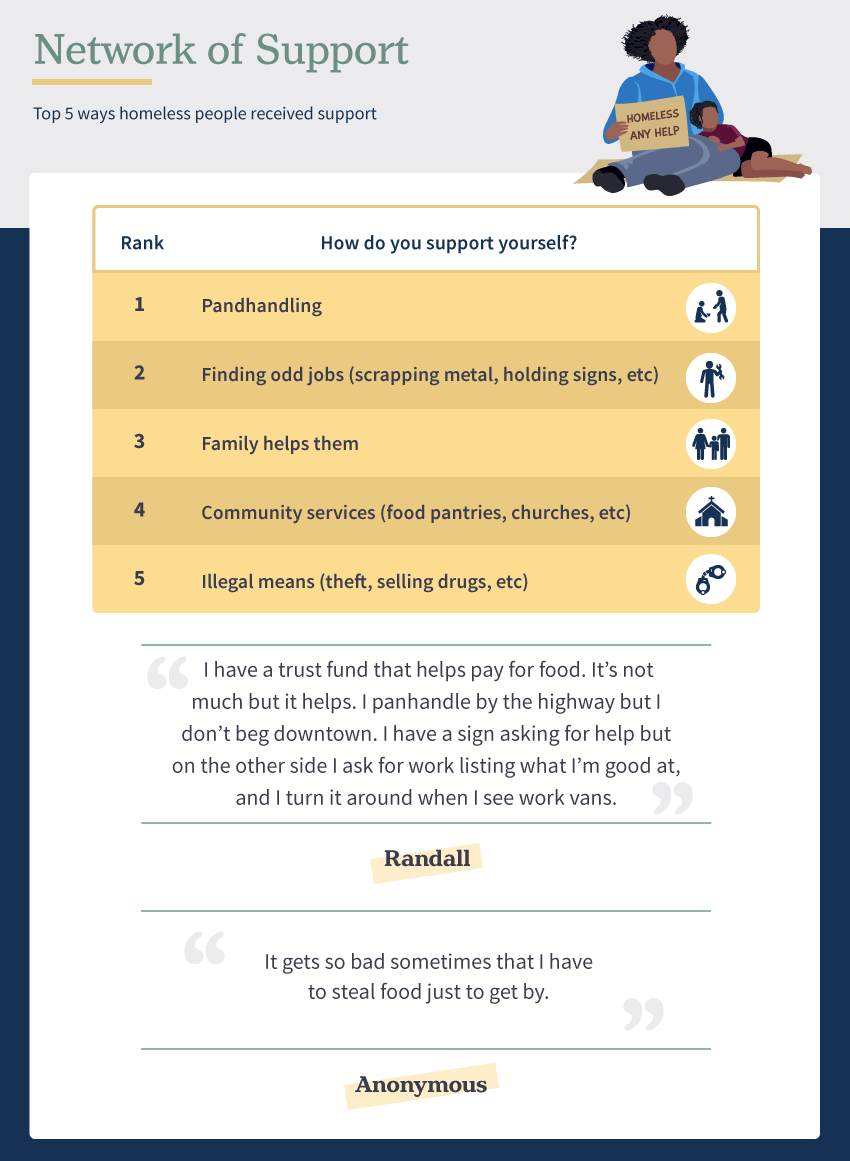 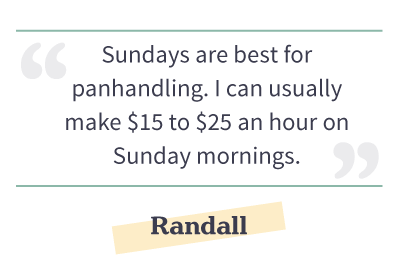 You’ve probably seen member of the homeless community accepting money on the street – perhaps you’ve even given them some yourself. According to those we interviewed, panhandling is the primary source of income for people in the U.S. who struggle to find a permanent housing situation. Don’t let singular stories sway your perception – as indicated above, the average homeless American we spoke to acknowledged earning less than $30 a day from any of the accessible sources of income  available to them.

We found that other means of support included miscellaneous employment (like scraping metal), assistance from family and community services, and some even admitted to illegal means including theft and selling drugs themselves. 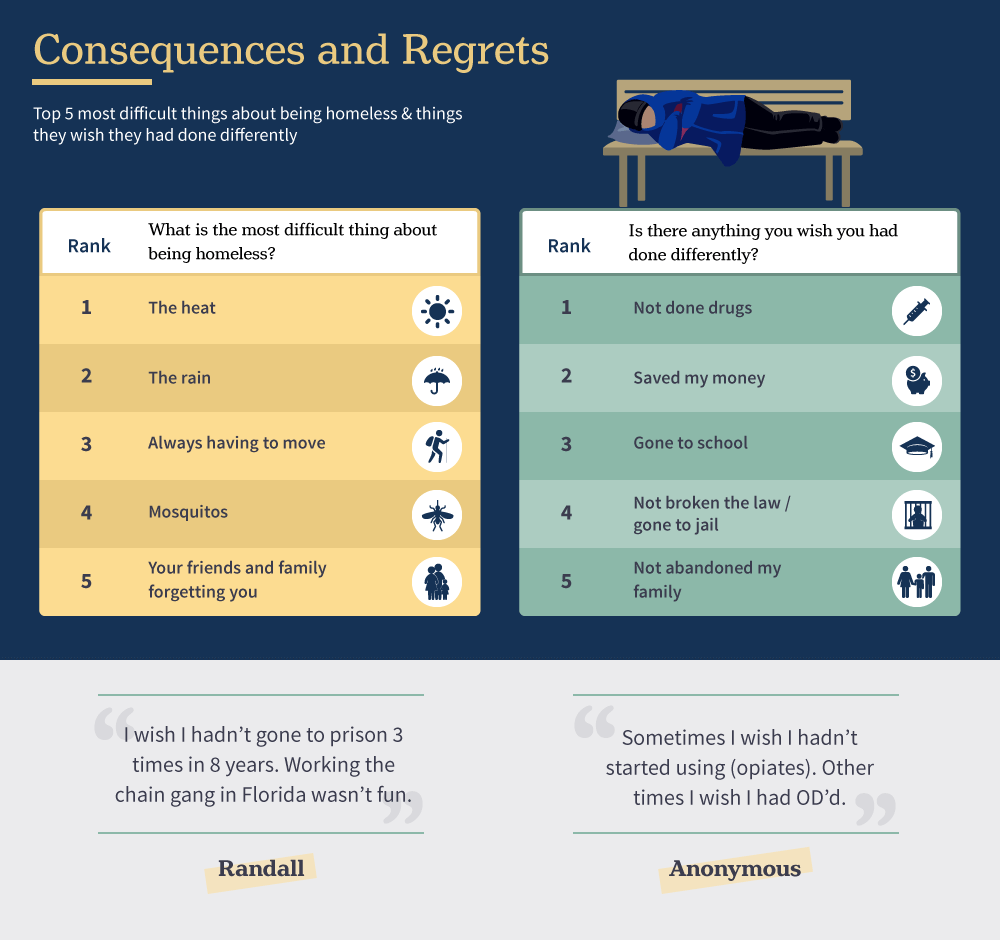 The True Cost of Homelessness

The homeless people we interviewed from South Florida also opened up to us about the hardest parts of not having a warm bed, or the guarantee of a hot warm meal, at night. According to those we surveyed, the heat of the Florida sun was the hardest part of their living arrangements. Florida isn’t the only state where homeless Americans battle with the summer heat. In Arizona, where summer temperatures can eclipse 100º on any given day, the heat can be deadly. Those we spoke with also admitted that the thought of their friends and family forgetting them was one of the most painful elements of being homeless.

And if they could do it all over again, what would they change? A majority admitted they wouldn’t have started using drugs, while others wished they’d saved their money or even gone to school. Time spent in jail, and away from family also ranked among the biggest regrets of the homeless Americans we surveyed 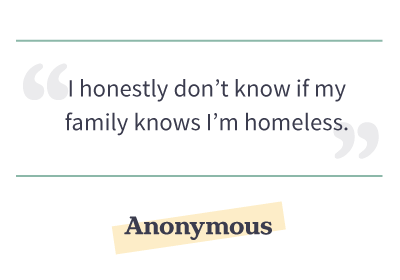 With over half a million Americans living without permanent housing across the country, you may see these men, women, and children on a regular basis without thinking about who they are or how they got there. In reality, nearly three-quarters of the people we interviewed in South Florida admitted to consuming drugs, alcohol, or both, they also told us if they could change anything about their lives, it would be drug use.

If you or someone you love is battling with substance abuse, there is hope. At Addicitions.com, we believe that the treatment process can be different for everyone and our goal is to help you create a unique plan that works for you. Every step of the way, from intervention to relapse prevention, we’ll help you find the treatment solution that meets your need. Getting sober can help you break the cycle of addiction and get back to living your best life, now. Visit our rehab centers page to learn about free addiction treatment.

We conducted 32 in-person interviews in various cities in Palm Beach and Broward County, in South Florida. We asked everyone the same questions and recorded anything extra they offered. Of those 32 people, 7 interviews were left incomplete due to a variety of reasons, such as the person changing their mind midway through, or not being able to provide coherent answers. As we wanted a reasonable sample size, we continued to conduct interviews until we had 25 fully completed interviews. While more than one person gave permission to use their name, only Randall also gave permission to use his photo. Last names have been omitted throughout for privacy reasons.