Of those, heroin deaths rose by 23 percent while deaths from synthetic opioids like fentanyl rose by 73 percent. At the heart of this crisis, the grim reality that most people in America use drugs for the first time while they’re teenagers, and the drug use in general is highest among people in their late-teen and early-twenties.

To understand the profession of substance misuse in American, we surveyed 2,000 people across the country about their history and life with illicit substances – including alcohol. We polled them about the drugs they’ve been using the longest, the ones they wish they could quit (and the ones they aren’t worried about), and the substances that started it all. Curious what we uncovered? Read on to find out.

Substances With the Most Long-Term Use

Our study found various trends of drug misuse across the 2,000 people we polled when we asked them to identify their highest level of education.

For those we polled with any level of college education, we found that alcohol was the most commonly misused substance over the longest period of time. According to the National Survey on Drug Use and Health, more than 86 percent of Americans over the age of 18 reported that they’d consumed alcohol at some point in their lives. In 2015, they also found that more than 15 million adults in the U.S. were also identified with Alcohol Use Disorder (AUD) and only 1.3 million people received treatment for it.

Our study found that the prominence of alcohol consumption increased among people with higher levels of education, but that overall marijuana use decreased. We found that more than half of respondents with Associate Degrees reported having consumed alcohol for the longest point in their lives, while more than a two-thirds of respondents with Bachelor’s Degrees said the same, followed by more than 70 percent of those we surveyed with Graduate Degrees. We found similar trends among cocaine use, which also rose as educational levels increased. 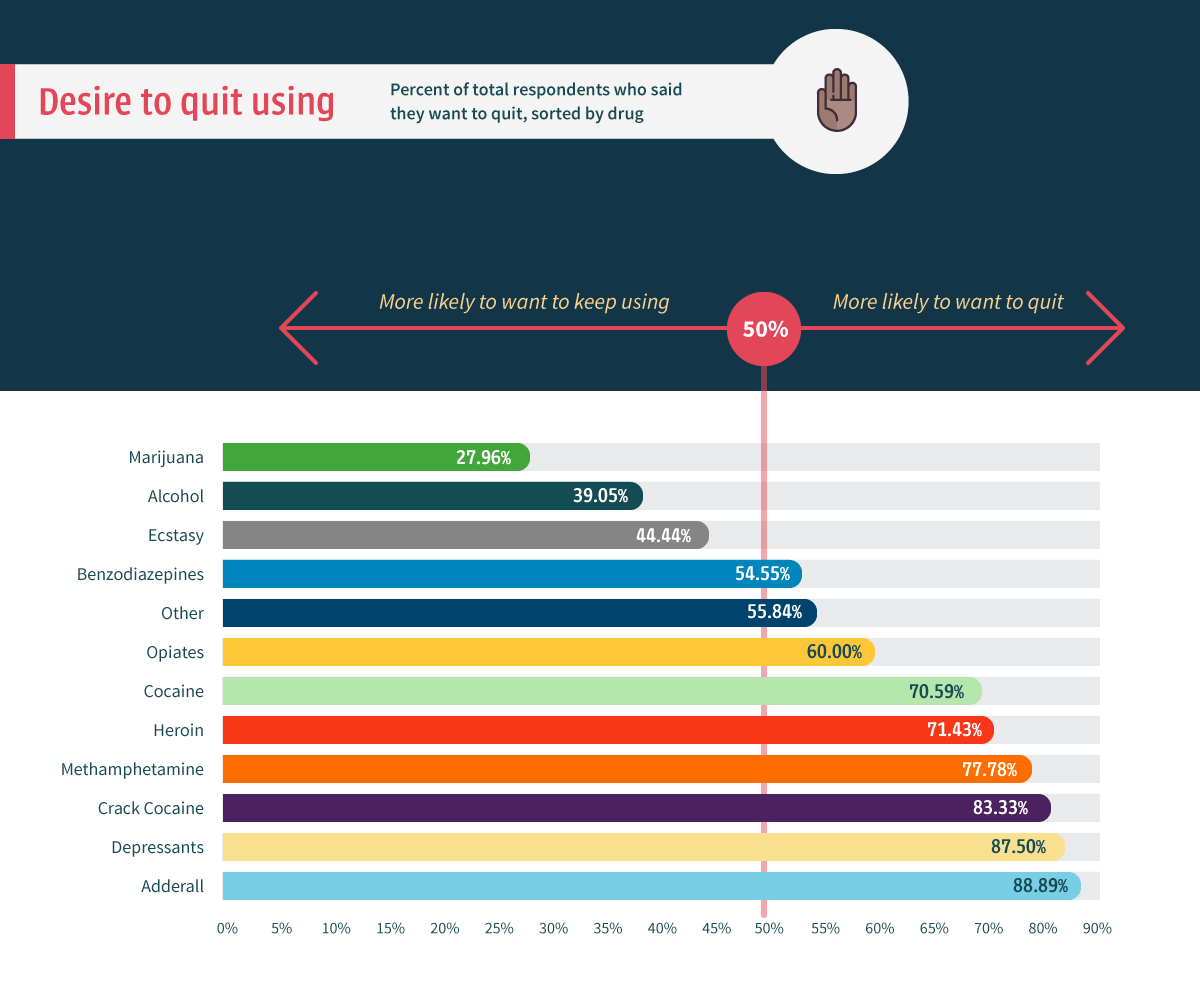 Drugs With a Desire To Quit

We asked the American’s we surveyed to what extent they desired to quit using drugs or substances they were currently consuming on a regular basis.

Less than half of the 2,000 people we polled who told us they regularly consumed substances including marijuana, alcohol, and ecstasy told us they actually wanted to quit. Long term use of both marijuana and alcohol can have lasting effects on the brain and other organs, including the parts of the brain that control memory, overall brain development, and the potential to develop severe mental defects.

Ecstasy (or Molly) when pure is composed of 3-4,methylenedioxy-methamphetamine, or MDMA. Unfortunately for the millions of people consuming this “party drug”, on its own, it can have serious health effects including depression, anxiety, and memory or attention deficits. In some cases, ecstasy is often cut with even more dangerous drugs (like fentanyl) turning these so-called recreational drugs lethal.
Our survey also revealed that a majority of people using certain substances told us they wished they could stop. More than three-quarters of the 2,000 people we polled who admitted missing illicit drugs including methamphetamine, crack cocaine, depressants (like tranquilizers), and adrenal told us they wanted to quit using them. In some cases, wanting to quit can seem easier said than done. Withdrawal symptoms from cocaine can include depression, fatigue, and insomnia. For those looking to quit, government approved medicines as well as therapy options can help them overcome the challenges of withdrawal. 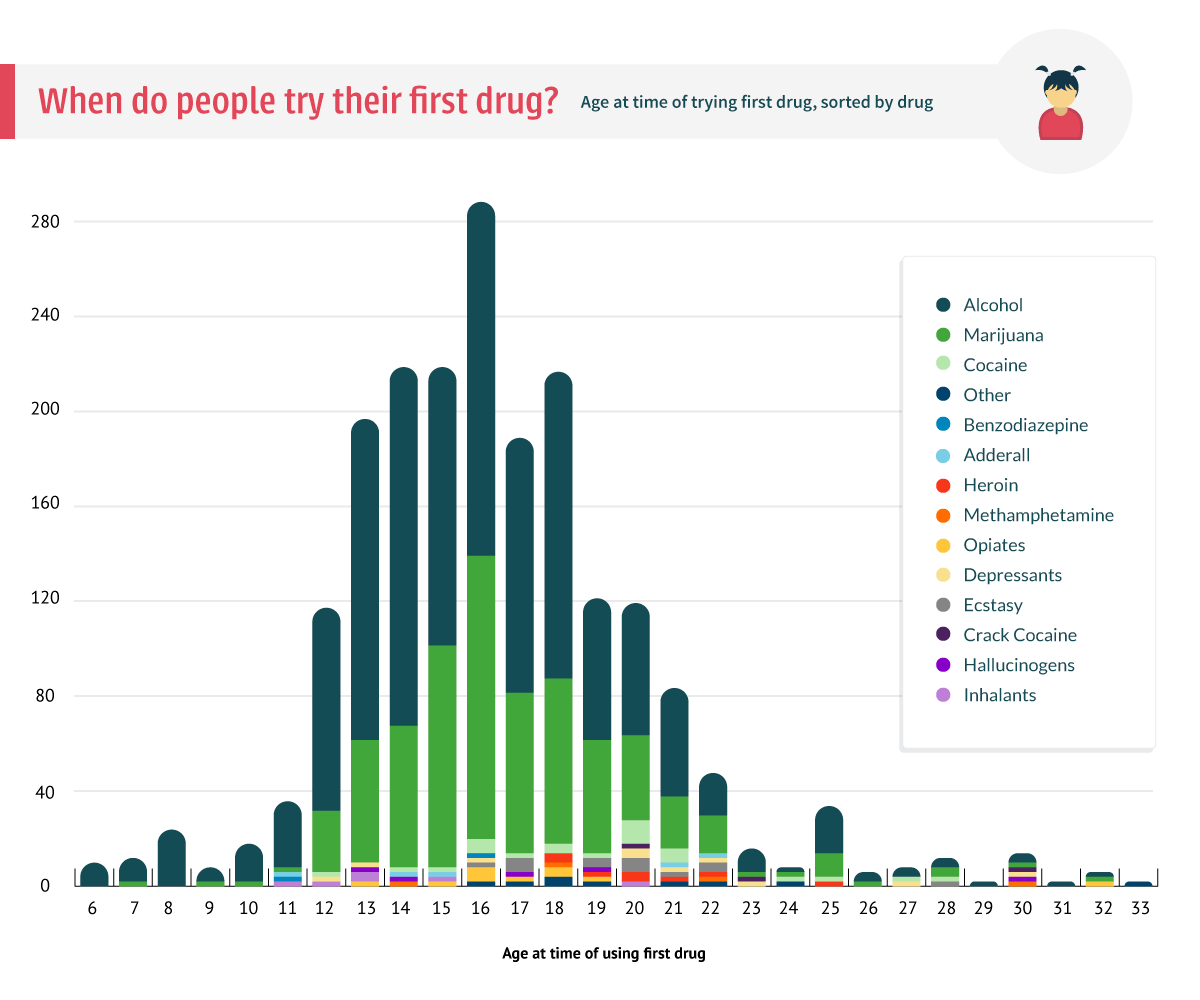 People we polled about their history of substance misuse told us the most popular time to try alcohol for the first time were between the ages 12 and 19. According to the NSDUH, an estimated 623,000 adolescents between the ages of 12 and 17 have alcohol use disorder – a condition more prevalent in young girls than young boys. Research has shown that exposing children to alcohol at home in casual settings is actually more likely to result in kids having had full drinks or gotten drunk before entering High School.

The age of 16 was also the most common response for people having tried marijuana for the first time, while 20 was the most common age for people in the U.S. trying cocaine and ecstasy for the first time. A 2012 survey found that more than one in 10 High School seniors reported using synthetic marijuana in the past year at the time they were surveyed. A recent study also found that young adults enrolled in college are more likely to begin using marijuana than young people the same age not in college. 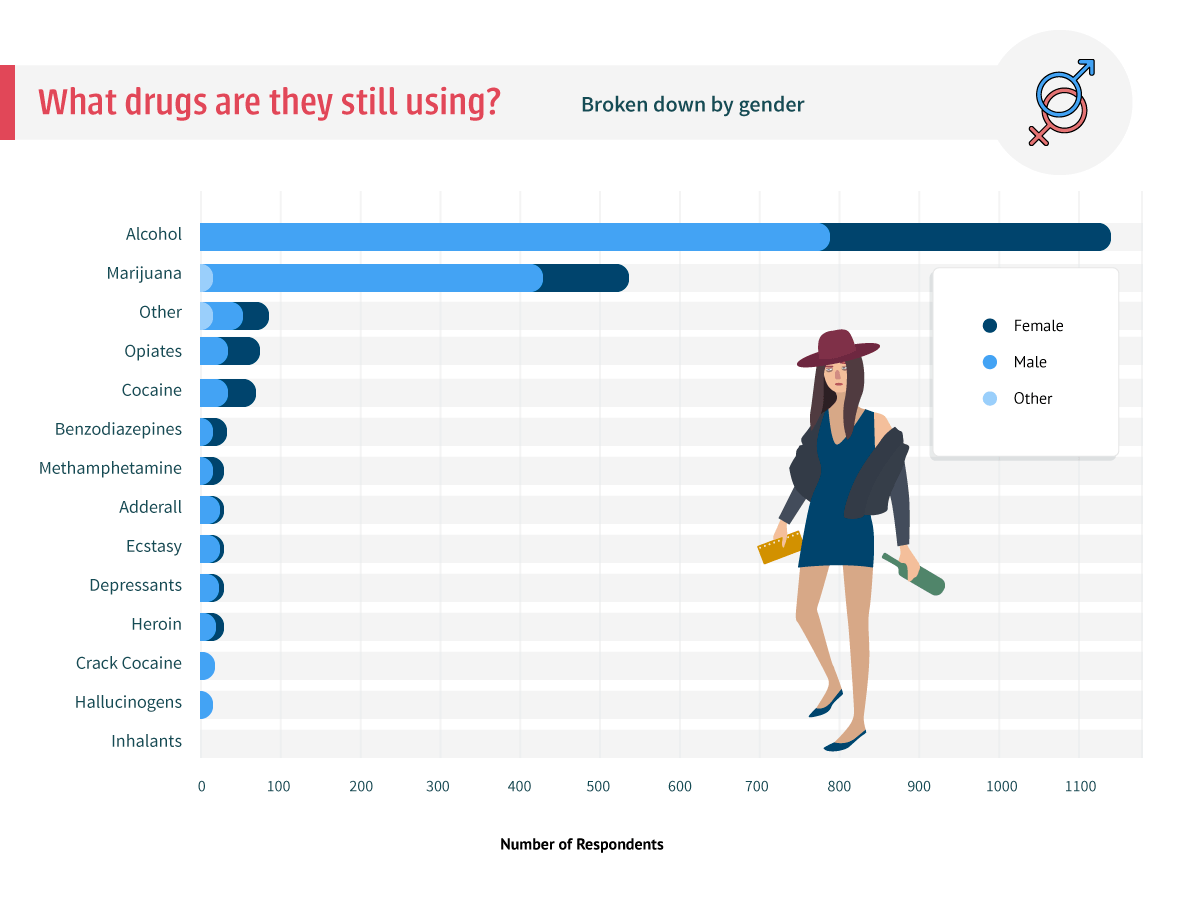 The Impact of Drugs on Men and Women

Based on our survey, we found that men were more prone to long term alcohol and marijuana use than women. Women are generally more likely than men to use more forms of illicit substances, their abilities to become dependent on these drugs is still the same. Despite men being the most likely to use most forms of drugs, we found that women were more likely to indicate using illicit substances including opiates, benzodiazepines, and methamphetamine  over longer periods of time than men were.

Research has found that certain types of drugs may affect women differently than men. Prescription painkillers, antidepressants, and other drugs that impact the brain have been found to have gender-specific effects. When it comes to benzodiazepines like Xanax, men’s kidneys may be able to filter the drugs out faster than a woman’s, meaning that women may need to wait longer before taking multiple doses. Benzodiazepines can also linger in a woman system longer than a man’s, making lower doses potentially more toxic. 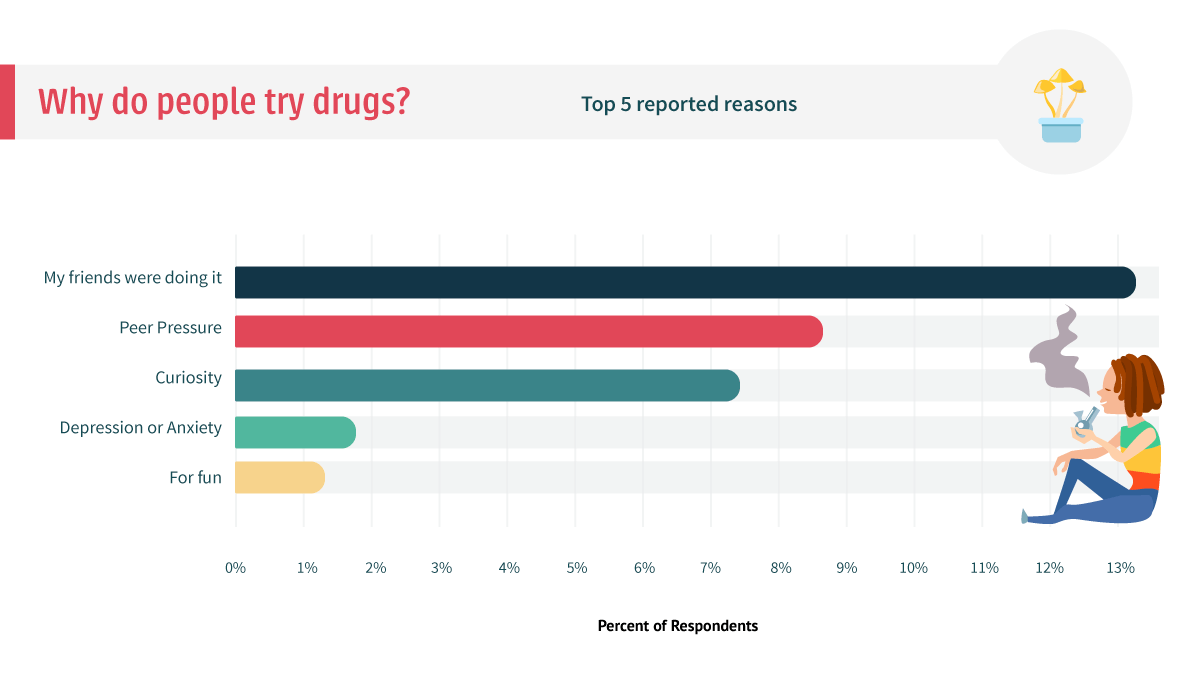 More than one in 10 people we polled told us they started either drinking alcohol or doing drugs because their friends were doing it, and nearly one in 10 said they started because of peer pressure. This pressure may not exclusively exist between the people they interact with on a regular basis, as research has found the some that teens using social media sites like Facebook or Instagram are also more likely to use drugs. Experts on the subject suggest that often times the idea of peer pressure can come from within, where a young person believes their friends or peers have done something, without really knowing that it’s happened.

This pressure can still feel very real, however, and can follow young people into adulthood when it comes to their ability to make important decisions regarding the misuse of illicit substances. In less than eight percent of our results did survey participants tell us that they started doing drugs because they were curious, and less than two percent of the 2,000 we polled told us they started using drugs just for fun. 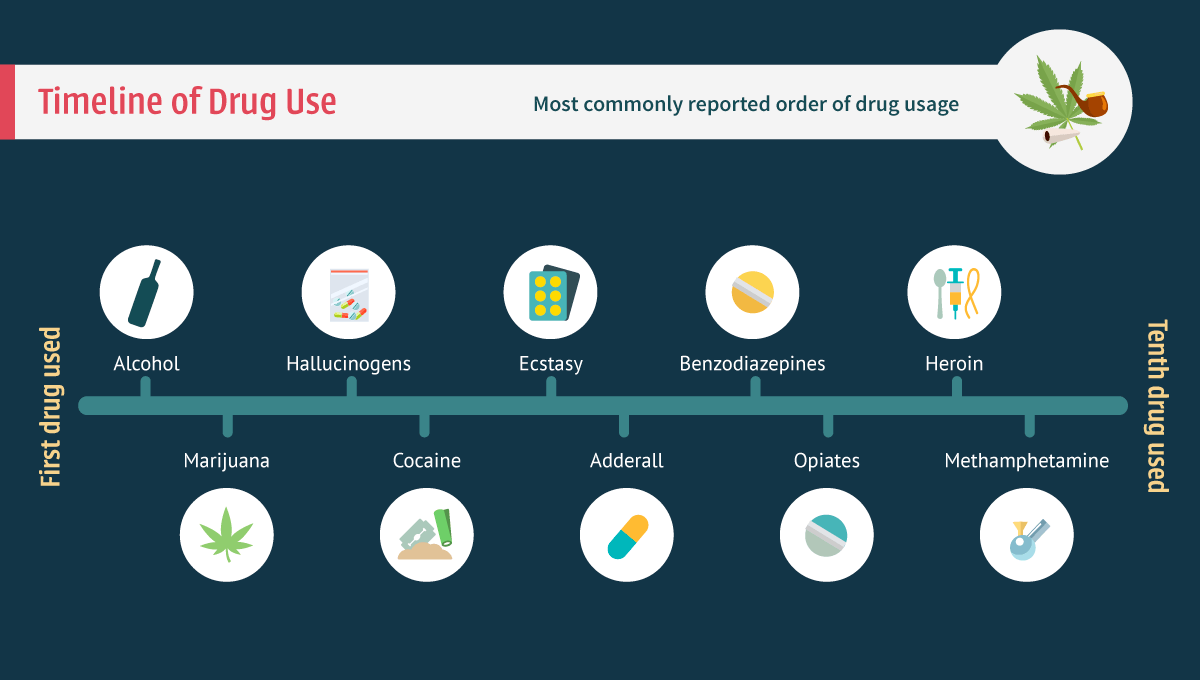 The substance that comes to mind when you think of gateway drugs might be marijuana – but that wouldn’t be entirely accurate based on the findings of our study.

Of the 2,000 people we polled, we found that alcohol was the most common substance consumed first, followed by marijuana, and then hallucinogens. A recently published study found that of High School seniors who acknowledged that they’d used alcohol, tobacco, or marijuana (or some combination thereof), more than half admitted to having consumed alcohol, even though it was completely illegal at their age. Less than a third said they’d smoked or chewed tobacco, and just over one in 10 of these High School seniors said they’d used marijuana. The study also found that the earlier kids began consuming alcohol, the more likely they were to go on to try other drugs.

Cocaine, ecstasy, and Adderall were also listed among the most commonly used drugs, while opiates, heroin, and methamphetamine round out our list as the drugs people used.