Have you ever wondered what someone trying to sell a “parTy” on Craigslist with a capital T really means? Or the use of the hashtag #mephedrone on Instagram. What about a specific emoji inside a dating application?

It turns out, these occurrences aren’t random at all. They’re code words for people looking to buy or sell drugs online. While it may seem crazy – and illegal – that doesn’t stop it from happening.

To understand the kinds of verbiage people use to describe drugs today, and how prevalent they really are in the drug community, we surveyed over 2,000 people for their insight into these underground trends. Curious what illicit narcotic Donald Trump might be code for? Read on to find out. 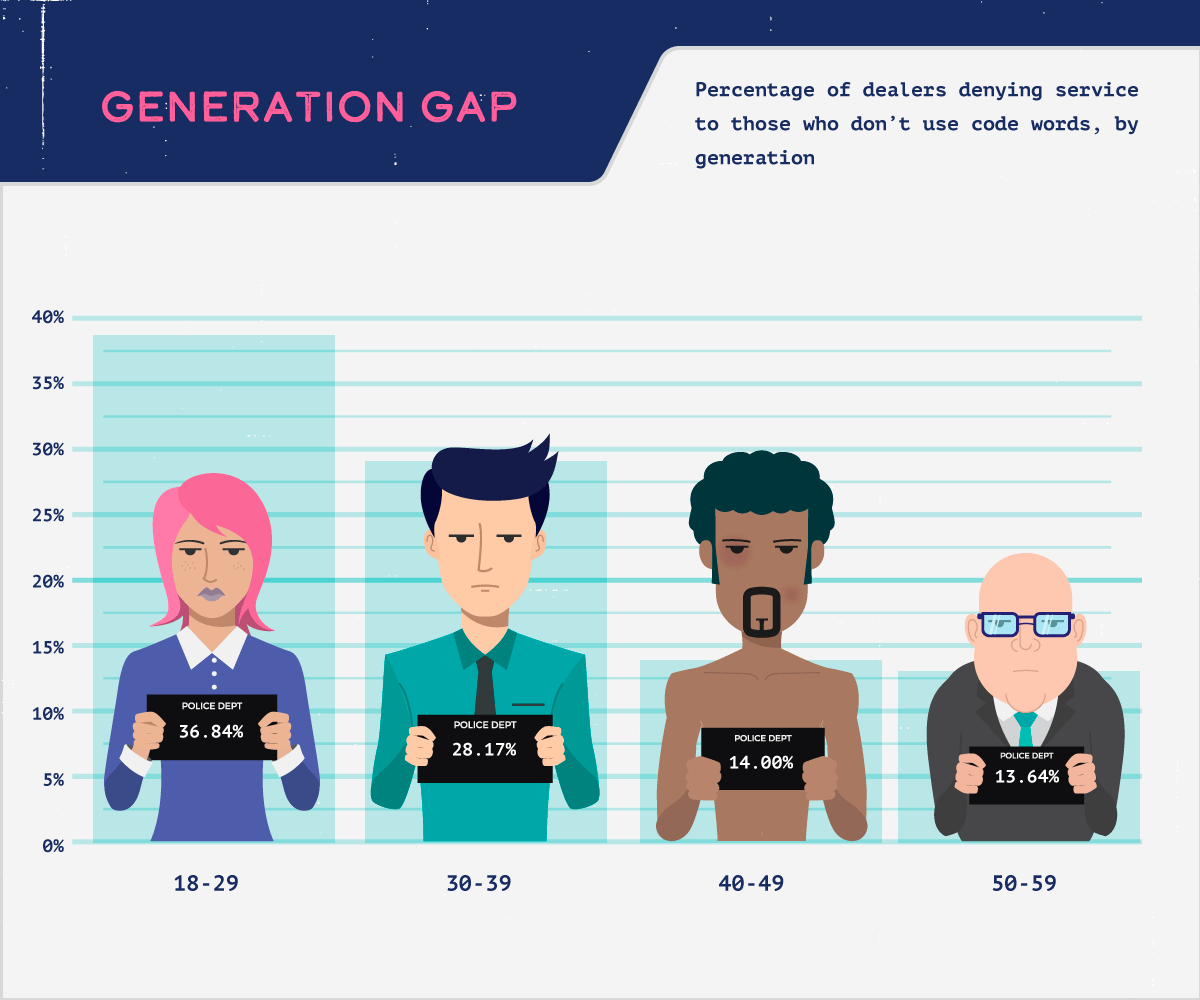 The Evolution of the Drug Scene

More than one in 10 young people between the ages of 18 and 25 had tried drugs like cocaine and ecstasy (MDMA) over the course of their lifetimes. Nearly twice as many admitted to consuming hallucinogens like LSD and mescaline.

Still, while drug abuse is sometimes more common for people in this age range than those who are older or younger, the NIH reports that new trends in the available substances, and how people ask for them, can emerge at a rapid pace.

According to our survey, more than a third of participants between the ages of 18 and 29 told us they’d been denied drugs because they didn’t use the proper code words to describe them. Like a fast food employee who used the phrase “fries extra crispy”, or euphemisms for illicit substances on online marketplaces like Craigslist, drug dealers may sometimes try to hide their efforts in plain sight by operating through code.

Older participants were less likely to be required to utilize slang terminology in order to purchase narcotics. Slightly more than one in four respondents between the age of 30 and 39 said they’d been denied drugs for not using the proper colloquialisms, while 14 percent or less of respondents between the ages of 40 to 49 or 50 to 59 said the same. 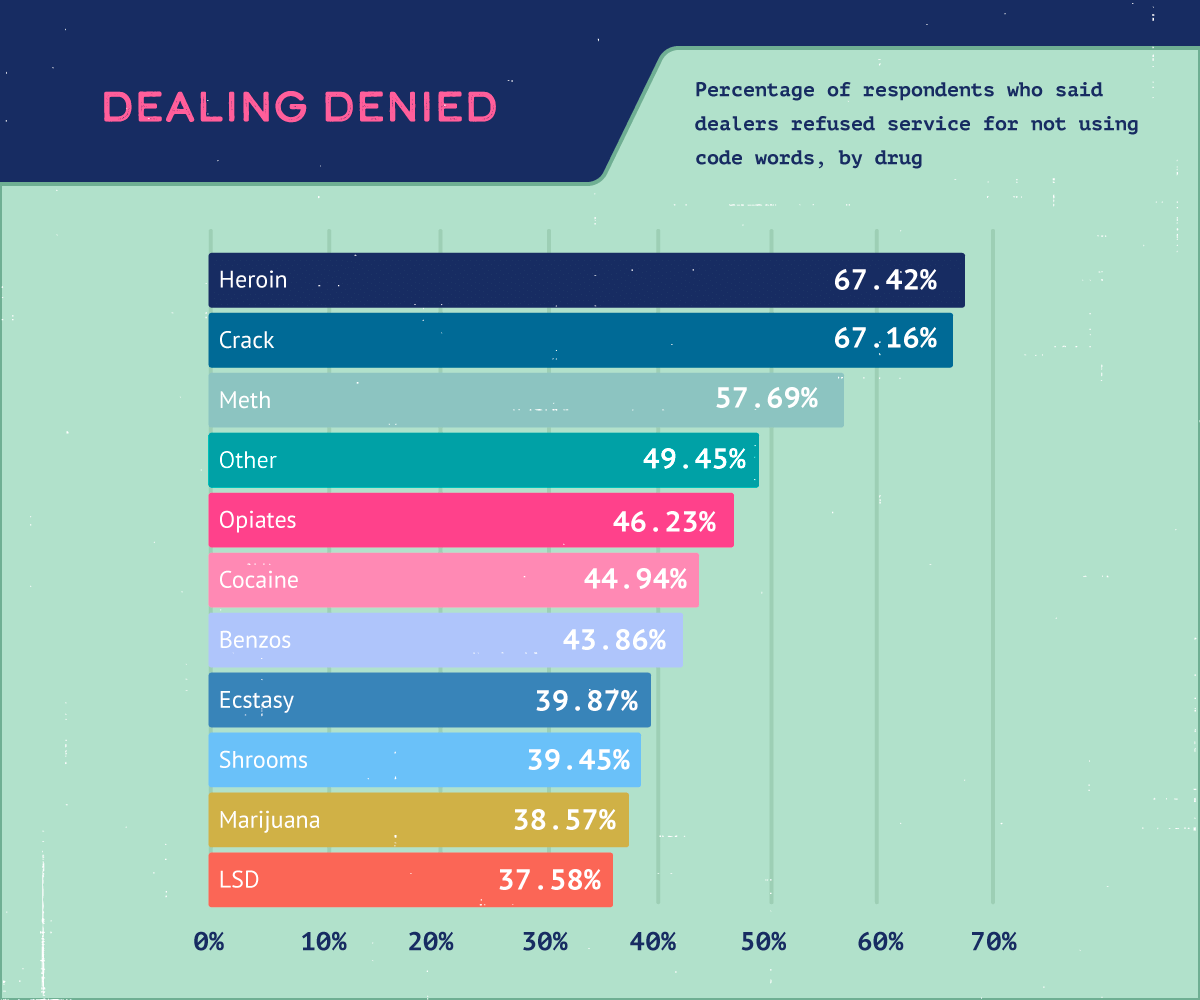 When a Word Is More Than It’s Meaning

More than two-thirds of the people we surveyed told us they’d been denied the opportunity to purchase heroin and crack cocaine from a drug trafficker because they didn’t use the proper terminology before attempting to buy.

For some distributors, code words aren’t just meant to be unnecessarily obscure or clever, they can be a way to avoid legal entanglements if the conversation – especially if conducted online or over the phone – should be intercepted by law enforcement. Of course, too many of these code words might do just opposite depending on how commonly recognized those terms happen to be.

Heroin and crack cocaine are both identified as being highly addictive, and today in the U.S., policymakers struggle to contain an opioid epidemic that includes the use of drugs like heroin that claim the lives of 78 people every day, on average.

While respondents reported high instances of being denied drugs like meth or opiates for not using the proper code words, fewer people had a difficult time acquiring narcotics like LSD, marijuana, mushrooms, or ecstasy. 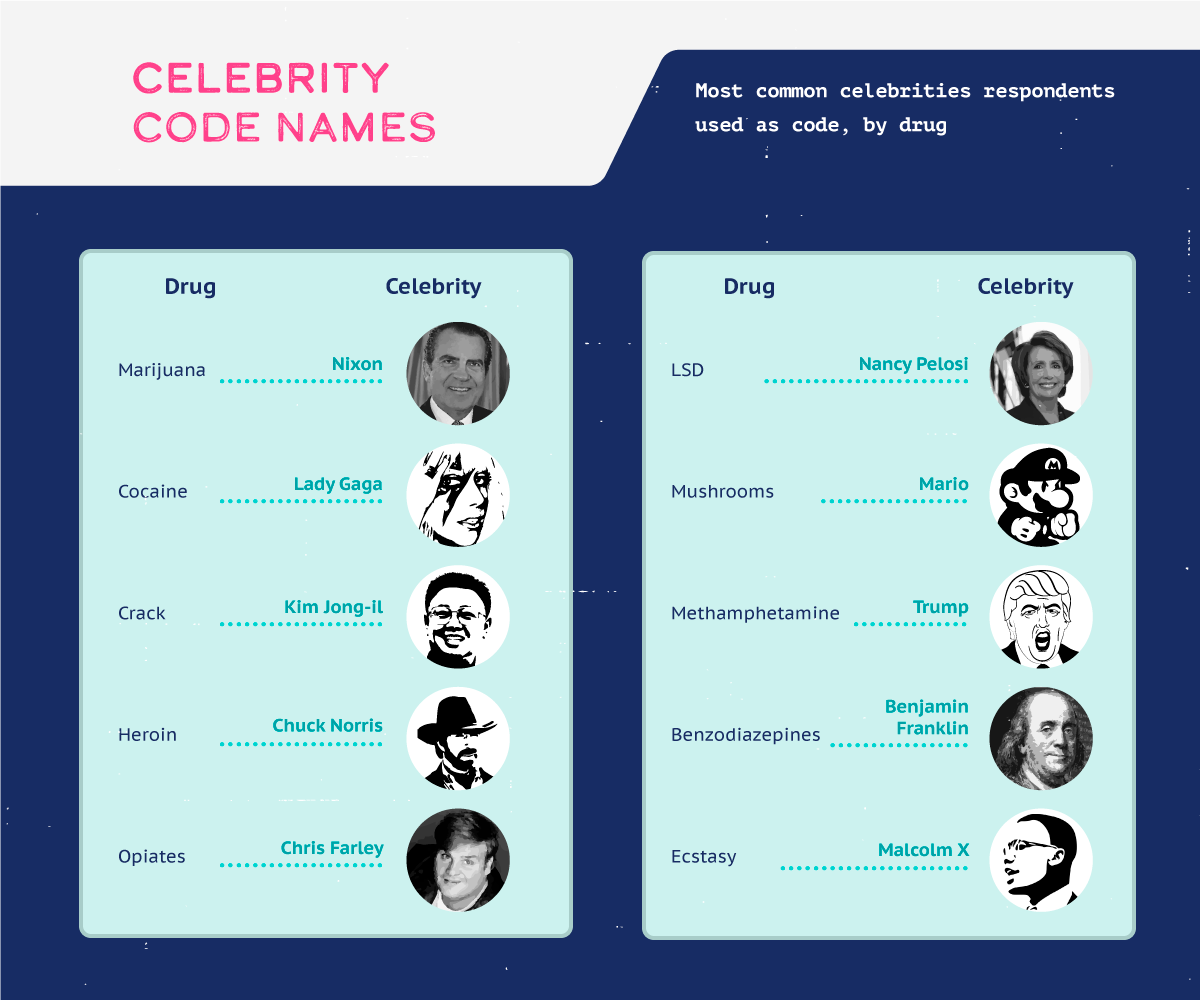 Politics are a hot issue today. From the office to social media, you might not be able to avoid it even if you tried. The next time you hear someone mention Donald Trump, consider this plot twist: The President’s name is the most popular celebrity code word for methamphetamine today.

He isn’t the only politician to make the cut, either. Nixon may have resigned from the Presidency after the infamous Watergate scandal, but his legacy lives on today as the most common celebrity code for purchasing marijuana. When you hear the name of Democratic Minority Leader in the House of Representatives, Nancy Pelosi, you may think of the latest drama on the Hill, but might really be listening to someone talking about LSD in private.

Politics aren’t the only secret celebrity names used to reference drugs today – Lady Gaga is the famous code name for cocaine, and beloved Nintendo icon Mario is the most common way to refer to mushrooms without being too obvious. 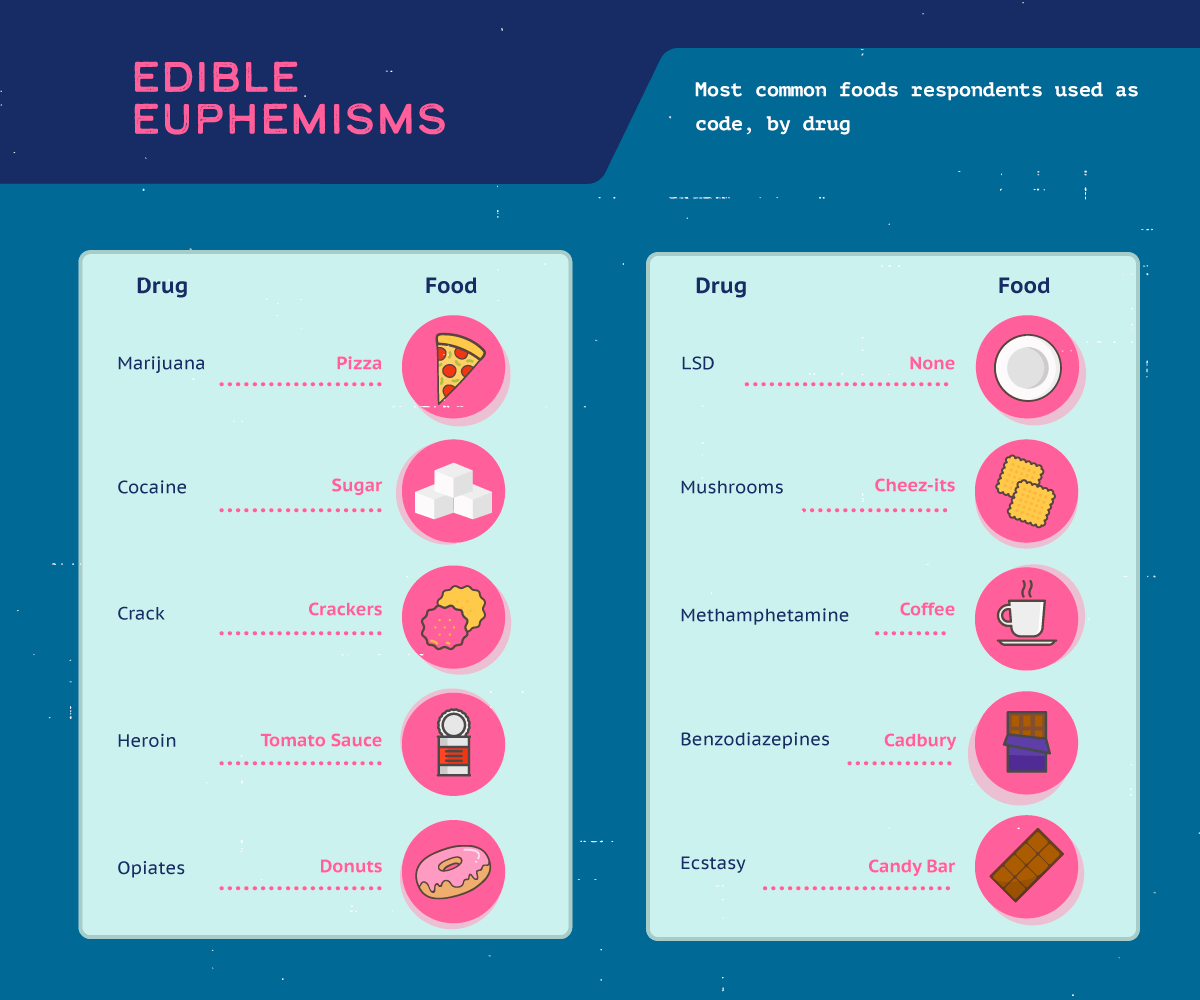 According to the 2,000 people we polled about the underground nature of drug slang, celebrity names weren’t the only euphemisms people use when communicating about illicit narcotics.

Respondents told us the most common edible code word for marijuana was pizza – perhaps commonly associated because marijuana is sold in fractions of an ounce similar to the way pizza slices are cut and served. Despite the casual nature of marijuana, and states that have legalized the drugs for recreational use, research has shown that marijuana can have long-term negative effects on cognitive development and communication skills. Other physical effects can include trouble breathing, increased heart rate in addition to mental illness.

People we surveyed told us heroin was commonly referred to as tomato sauce, ecstasy was coded as Cadbury, and cocaine was abbreviated as sugar in casual conversation. Only the hallucinogenic LSD didn’t have a food equivalent nickname based on our research. 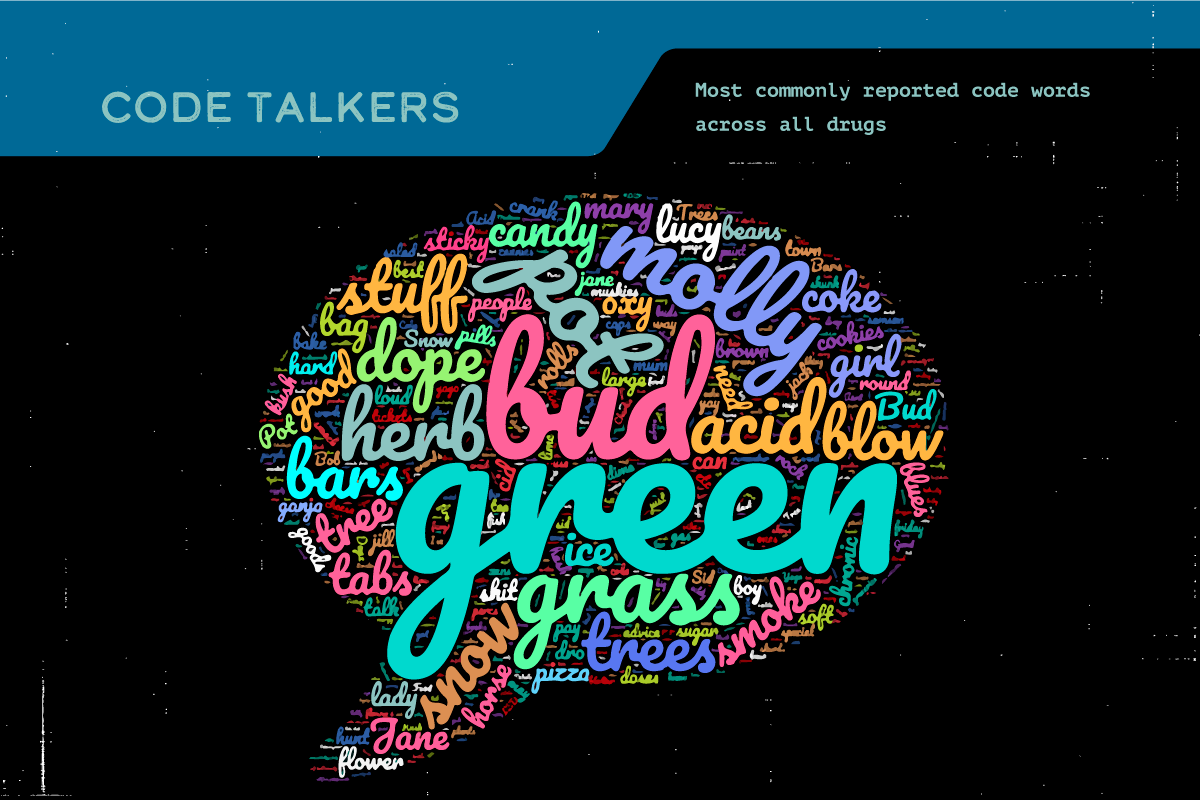 When we asked survey participants what the most commonly reported code words were, regardless of narcotic type or classification, many of the words they mentioned were related to marijuana.

Including “green”, “grass”, and “bud”, these casual expressions mirror the sometimes casual way that marijuana is handled in popular culture. From movies, celebrities, and even television shows, marijuana has been portrayed in mainstream media as having positive side effects with minimal consequences. Despite this perception, research has shown that the notion of casual marijuana use is more a myth than a reality. Marijuana doesn’t just impact cognitive development, it can be addictive and linked to psychotic symptoms.

Other commonly used code words included “Molly” (used to describe MDMA or ecstasy), “snow”, “tabs”, and “blow”. Like marijuana, ecstasy has come to be known as a party drug but has been found in numerous occasions to be cut with other (sometimes deadly) unidentified substances.

The Volatile Nature of the World of Drugs

The world of illicit narcotics is always changing. Just when you think you might understand the true impact these substances could be having on the community around you, they evolve or become harder to detect by obscuring their name or even code-names. Our study found that while common code words used to describe drugs like marijuana were exactly what you might expect, others were much harder to decipher.

Regardless of their nicknames, there’s nothing casual about the impact these drugs can have on your life. If you or someone you love is battling with the misuse of illicit substances, visit us online today at Addicitions.com. Our goal is to help connect you with the best treatment centers across the country to help you get the help you deserve, today. Visit us online at Addictions.com, or call 1-844-768-1155 for your free consultation today.

We conducted a survey of 2,000 Americans to find out what code words they use to discuss and purchase drugs. We analyzed responses based on age and the specific drug being purchased, and manually pulled all responses containing celebrity names or foods, as they were the highest categories based on the number of occurrences.

Want to use our study on your site?