There are a few primary indicators you can look for after a night out that might tell you if you’ve had too much to drink, and some may be a bit more obvious than others.

If you wake up in jail, or with little memory of the events that may have transpired to get you there, it’s probably a safe bet that you had too much to drink. But what about the more casual consequences of just one beer too many? A hangover, or a fuzzy relocation of the night’s events? What are those signs telling us, and should we be listening?

We surveyed 2000 people about their drinking habits across the country to understand just how bad a night on the town could get. From waking up with a wicked hangover, to waking up naked with somebody else – we asked people how often these things happen to them, and what they’d been drinking to get there. Curious which beverages led to the most DUI’s among men and women we surveyed? Read on to find out.

Too Much To Drink

If you understand the science behind waking up with a hangover, then you know that a persistent headache or sensitivity to any form of light or noise are your body’s way of communicating the negative effects of too much alcohol. Not only does excessive alcohol consumption end up forcing you to the bathroom more frequently, but that loss of fluid can leave you dehydrated, signaling the beginning of the next day’s hangover. Alcohol can also irritate other standard functions in the body (including digestion and immunity) further compounding the symptoms we wake up with the in the morning.

According to the 2000 Americans we polled, more than one in five indicated drinks including tequila and vodka were each ranked as the most common catalysts for hangover hell. Only one in 10 indicated they got their worst hangovers from beer, and less than three percent said either gin or scotch triggered the most irritating after effects. The worst symptoms might not just include a headache either –  among other things; hangovers can lead to fatigue, nausea, vomiting, and dizziness as a reminder of just how much alcohol can impact our bodily functions.

Waking up and realizing you’ve got a hangover might not be the worst thing that could happen to you after having too much to drink. More than one in three people we surveyed told us they’d woken up naked after one too many drinks, with beer coming out on top as the most common culprit for these nude morning revelations.

Excessive drinking doesn’t just impair the brain’s ability to remember things after they’ve happened, it can diminish our cognitive capacity altogether, making it difficult (or even impossible) to make fully rational decisions. The effects can be even more severe among adolescents and those who participate in binge drinking. While more than three out of four people we polled who said they’d woken up naked after a night of drinking told us they’d had beer the night before, more than a third indicated it happened to them after drinking too much vodka, and nearly one in four said it happened to them after drinking too much wine.

Reduced cognitive capacity can impair our ability to make all sorts of decisions – including how much we should be spending on drinks in the first place. Ordering a drink out might cost you anywhere from $5 to $15 (or more) depending on the kind of drink and what goes into making it. Multiply that by the number of drinks you order for yourself, or even for others, and you might end up with a pretty hefty tab by the end of the night.

According to our survey, the most expensive bill at the end of the night came from Florida totaling just over $279. Mississippi followed just behind with a $263 tab, while California was the only other state to top $200 with a nearly $213 bill. In states including Ohio, Maryland, and Missouri, the highest bar tabs reported to us were just under $100 ranging between $87 and $93.

There are only a few things in life that truly last forever – and a tattoo might just be one of them. Sure, you can pay a lot of money to have them removed if you’re really serious about it, but otherwise, the tattoos you get drunk or sober are bound to stick around.

Even major celebs have tattoos they regret after a while, but there are a number of reasons why you might want to avoid the tattoo shop after having a few drinks. Beyond the potential for instant regret, you even expose yourself to health concerns if you consider getting inked under the influence. Alcohol acts as a natural blood thinner, which can lead to excessive bleeding and even delayed healing after getting a new tattoo. According to our survey, more than four in five people who admitted to inking while drinking said it was the beer that got them in the chair, and more than two in five indicated they’d been drinking vodka before they got their drunken tattoos permanently placed.

One of the most severe indications that you’ve had too much to drink can’t be cured with aspirin or an afternoon nap.

On average, 1.5 million people are arrested every year for drunk driving. Others aren’t so lucky, Another 10,000 people die across the country in drinking-related accidents, accounting for roughly a third of all driving fatalities in the U.S. While people who get arrested for DUI’s may later indicate that they felt sober enough to drive, the number of drinks that will put you over the legal limit (.08% blood alcohol content) can be different for everyone.

Our survey found that of Americans who acknowledged having received a DUI in the past, wine was the highest contributing alcohol type for women, while tequila was highest for men. Different alcohol types have various content levels, meaning the amount of each drink a person can safely consume varies as well. Distilled spirits, including tequila, rum, and vodka, have among the highest concentrations of any alcoholic beverage.

Nearly one in 10 Americans we surveyed told us their worst experiences with alcohol had gone from bad to worse, resulting in a night behind bars.

More than any other addictive substance, alcohol is more closely linked to crimes including murder, rape, assault, and spousal abuse. According to our survey, more than 90 percent of Americans we polled indicated they’d been drinking beer when they were arrested, while nearly half had been drinking vodka. Based on our poll, gin, wine, and scotch each accounted for the lowest number of run in’s with the law – earning less than one in 10 arrests according to those who found themselves behind bars after (at least) one too many drinks.

Drinking either too much or too fast can have severe consequences on your ability to remember exactly what happened the next day and may even result in a blackout period where you remember nothing at all. College students especially are associated with binge drinking and blackout behavior, but even a casual drinker can experience a blackout after rapidly increasing their blood alcohol content over a short period of time

These experiences don’t just include the short-term consequences of the events that may have transpired at the moment; they can be indicative of long-term health risks including degenerative cognitive capacities that worsen with age. According to our survey, we found a pattern among the number of blackouts Americans experience each year based on the type of alcohol they most prefer to drink. People we polled who told us their favorite drink was vodka indicated nearly four blackouts each year, and those who favored whiskey indicated a similar number of severe memory lapses. While some drinks (including scotch and rum) had a lower rate of blackouts, the combined average across all beverages we surveyed indicated that most Americans blackout nearly twice a year from alcohol consumption. 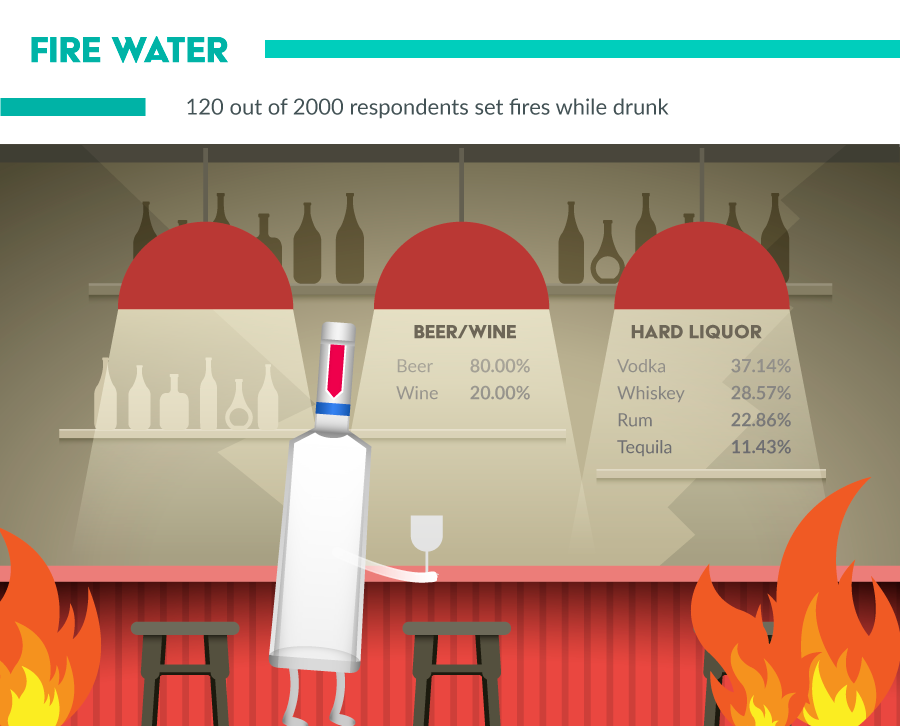 Among the craziest things you could do while drunk? Arson, of course. While less than one in 10 Americans we polled told us they’d ever caused a fire while drunk, 80 percent of those who had indicated they’d been drinking beer at the time.

More than three in four fatal campus fires between 2000 and 2015 involved at least one college student considered legally drunk (a .08% BAC). More than a third of those we polled who said they’d started a fire at least once while intoxicated told us they’d been drinking vodka, while more than one in four were drinking whiskey.

By exploring our maps above, you can see which states had a propensity for which types of alcoholic beverages. While beer and wine may not initially seem like dangerous beverages to consume (particularly in social circumstances) our research shows that even drinks with lower alcoholic volumes can lead to serious and severe consequences. Beer was the preferred drink over wine in nearly every state across the country, but also the most likely to result in arson, arrest, and even a drunk tattoo.

Our study also found that vodka was the most popular hard liquor choice in 15 states, including California, Colorado, and Texas. Of those we polled, vodka also had the highest rate of alcohol-related blackout incidences.

The Road to Recovery

Regardless of how often you drink, or how casual it may seem, the reality is the consequences of excessive alcohol consumption can happen to anyone – and in some cases, they can be deadly. Of the more than 15 million adults in the U.S. suffering from alcohol use disorder, less than one in 10 received treatment at a specialized facility for their condition in 2015.

If you or someone you love is battling with alcohol misuse, there is the help available. At Addictions.com, we believe in finding the right treatment facility for your needs means helping you take back your life. With a specialized plan for recovery, detox, rehab, and relapse prevention are within reach. To learn more and start your road to recovery today, visit our rehab centers page.

We surveyed 2148 people who use or have used alcohol. These people chose to participate in the survey openly. The only qualifier was that the people surveyed had to have been intoxicated (drunk) at least one time in the last year. 148 of the respondents were taken out due to incomplete responses.

Want to use our study or data from our study?