The National Institute on Drug Abuse defines addiction as “a chronic, relapsing brain disease that is characterized by compulsive drug seeking and use, despite harmful consequences.” Additionally, “In 2013, an estimated 24.6 million Americans aged 12 or older—9.4 percent of the population—had used an illicit drug in the past month. This number is up from 8.3 percent in 2002.”

If you or someone you love is one of the people grappling with the devastating effects of addiction, the battle is difficult and extends over an entire lifetime. But, the more resources are brought to battle, the greater the chance of success. The same way that you benefit from forming a large support system made up of different people with different strengths, your recovery plan should have a lot of components that address different aspects of recovery.

One way to help with recovery is aromatherapy. It does sound a little hippie dippie to some people. But, there are a lot of alternative medicine practices already incorporated into recovery, including acupuncture, yoga, and meditation. If it works, do it. 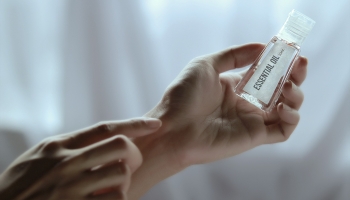 An aromatherapy massage can ease anxiety and promote relaxation.

For thousands of years, various cultures have used fragrances as part of their healing practice. Some of the most notable regions using fragrance include India, China, and the Middle East. It was not, however, until the middle ages that the use of essential oils was discovered and it is that tradition that modern aromatherapy builds upon.

The term “aromatherapy” was coined by French chemist Rene Gattefosse, who introduced it in the early 20th century. The practice would fall out of popularity before being revived in western countries during the 1980s and 1990s.

Aromatherapy is basically the inhalation of the scent provided by an essential oil. Essential oils are harvested from the heavily fragranced portion of plants, generally under the surface of leaves, bark, or peel. These essences are gathered through diffusion with steam and/or water or mechanical pressing. Any oil manufactured via chemistry is not considered a true essential oil.

Practicing aromatherapy can be done in different ways. Examples listed by the National Cancer Institute include:

Part of the reason withdrawal is so hard is that the brain still wants the drugs and it is programmed to get them. When it no longer does, the brain triggers a number of negative responses throughout the body. This is where aromatherapy can be important. As it works within the same system, it can be used to trigger positive memories and their rewards and to trigger the brain to make new positive memories.

Aromatherapy can be used to treat insomnia, mild depression, aches and pains, nausea, distress, anxiety, and other negative side effects of withdrawal and recovery. It can also increase energy, provide a feeling of calm, open airways, and balance metabolism.

Scents that have proved useful to recovering addicts include:

These are some basic essential oils commonly chosen to treat addiction and sustain recovery. However, the types of oils used and the ways they are combined may vary, subject to the experience and skill of the aromatherapist.

What Can Best Help Support Your Life In Recovery? Anger Management: Is it a Necessary Component of Addiction Treatment? Cooking in Recovery: Why Finding a Passion in the Kitchen Is so Beneficial 7 Ways to Know Depression and Addiction Are Spiraling Out of Control 7 Stress Handling Tips for Early Recovery