It’s no secret that America is facing a major drug addiction crisis. Drug overdose deaths have tripled nationwide since 2000, attributing to over 52,400 deaths in 2015 alone. Today, roughly 49 percent of Americans admit to having used an illicit drug at least once in their lifetime. In 1979, this number was slightly above 31 percent.

Addiction can affect anyone across the board, regardless of a person’s age, gender, or socioeconomic status. Certain U.S. states encounter more problems with addiction than others based on factors including prescribing laws, proximity to drug trafficking activity, and available addiction treatment options. Though each state faces its own unique struggles with addiction, America as a whole is working toward a finding solution to curb the drug epidemic, and to protect its families and communities from the general suffering brought on by addiction.

Here’s a closer look at 10 states with the biggest drug problem, and what these states are doing to combat substance abuse.

1. The District of Columbia

Washington, D.C. ranks highest in the country for drug and alcohol addiction. Drug overdose deaths in D.C. increased by 31 percent from 2014 to 2015 — the majority of which were caused by prescription painkillers. With the second highest rate of teen and adult drug abuse in the country, the District of Columbia suffers mainly from lack of addiction treatment — leaving thousands of local residents without help and support in the form of medical care for their chemical dependencies and behavioral disorders.

The most commonly abused substances in Washington, D.C. are alcohol, marijuana, and cocaine. PCP use is also higher in D.C. than in other states, but more adults test positive for cocaine than any other drug. Opioid abuse rates are also high in D.C. like in many other states, and has led the District to link its prescription drug monitoring program with Maryland and Virginia in an effort to reduce the overprescribing of opioids.

Experts say addiction rates are highest in D.C. due to the city’s large population of politicians and other individuals in high positions who may use substances to escape feelings of stress, anxiety, and depression triggered by their careers. These individuals may abuse substances to cope with life’s everyday stressors, or may frequently attend events at which alcohol and substances are present and easily accessible.

Opioids, heroin, and marijuana are the most commonly used drugs in Vermont. The rate of opioid overdose deaths in Vermont increased by over 20 percent from 2014 to 2015, mainly due to the overprescribing of painkillers. Many rural areas in Vermont lack medical facilities, but have large Medicaid populations. As a result, doctors are being overworked, and using opioids as a cure-all to reduce pain in patients who could have certain health conditions treated using safer, less riskier therapies.

Vermont officials say the state sees high drug trafficking activity since it lies between Montreal and large northeast cities including Boston, New York, and Philadelphia. Officials also say that individuals in rural areas of Vermont are willing to pay more for certain substances, which lures in drug dealers from neighboring states. Vermont is currently taking steps to raise awareness throughout communities about the dangers of certain prescription drugs, and is increasing access to prescription drugs that reverse opioid overdoses. 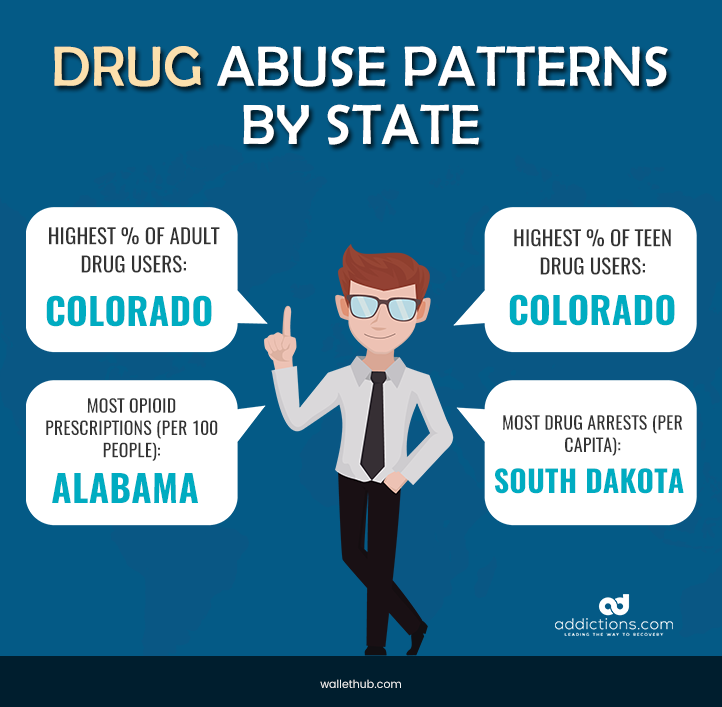 Colorado ranks number one in teen and adult drug use, but unlike its predecessors in this list, the Centennial State offers many addiction treatment options. Marijuana, cocaine, and opioids are the most commonly used drugs in Colorado, though opioids are contributing to the majority of the state’s overdose deaths. Data shows that approximately two-thirds of opioid overdose deaths are caused by prescription painkillers, while the remaining third are caused by heroin.

Addiction rates are highest in Denver, and in many rural counties throughout the state. One of Colorado’s top concerns is the overprescribing of opioids, which is driving the state’s overdose death toll. Heroin use is also on the rise in Colorado, since painkiller users often turn to heroin when they can no longer afford or obtain painkillers.

Experts say drug abuse rates are higher in Colorado than in other states due to factors such as weather, boredom, and the legalization of recreational marijuana use. Cold weather can make some residents feel isolated during cold months, while teens and adults in rural areas may abuse alcohol and drugs out of boredom. Marijuana often serves as the gateway to other drugs, and may be mixed with alcohol, heroin, and other substances that increase the risk for an overdose and other serious problems.

Delaware’s primary drug threats are heroin and prescription opioids. These substances are deemed the most problematic in the First State due to their availability and the high number of related law enforcement seizures, overdose deaths, and treatment admissions.

Heroin use in Delaware is mainly being driven by painkiller use, since patients eventually head to the streets to buy heroin when painkillers become too costly or difficult to obtain. Fentanyl use is also becoming more widespread throughout the state, since heroin dealers are starting to cut or mix fentanyl into batches of heroin to stretch their supplies. State reports reveal that 80 percent of heroin users in Delaware began their addiction with legally prescribed painkillers.

Delaware is currently working toward expanding addiction treatment options, and making an opioid overdose reversal drug available across local pharmacies. Meanwhile, Delaware law enforcement is monitoring drug trafficking activity that takes place near the Port of Wilmington, and Interstate 95, where heroin is trafficked from New York.

Opioids and marijuana are responsible for the majority of drug-related problems in Rhode Island. America’s smallest state ranks fifth in teenage drug use, and third in adult drug use. The state also ranks second with having the highest percentage of adults who are unable to seek needed addiction treatment.

The number of drug overdose deaths in Rhode Island increased by almost 16 percent from 2015 to 2016 — most of which are being driven by powerful opioid fentanyl. Fentanyl, which is up to 100 times stronger than morphine, accounted for 64 percent of all drug-related deaths in Rhode Island in 2016. Just like in many other states, painkiller abuse is driving heroin and fentanyl use, which in turn, are leading to an uptick in drug overdose deaths.

Methamphetamine is Oregon’s number one drug threat, and is driving drug overdose deaths across the state along with heroin and painkillers. Meth was involved in 202 deaths in Oregon in 2015, while meth-related arrests doubled from 2009 to 2015. In terms of opioid abuse, state data reveals that Oregon has the highest rate of seniors hospitalized for opioid-related issues in the country.

Sixty-two percent of Oregon law enforcement consider meth to be the state’s number one drug problem, while 24 percent report heroin as the principal drug threat in their jurisdictions. Meth in Oregon is commonly distributed by outlaw motorcycle clubs and street gangs, while heroin can often be purchased via the Internet on social networking sites, and at certain restaurants and nightclubs.

Though experts have yet to pinpoint why Oregon faces major struggles with addiction, the state is taking steps to improve doctors’ prescribing methods, and reduce drug trafficking activity associated with illicit meth, marijuana, and opioid supplies.

Like many other northeastern states, Connecticut struggles with opioid and heroin use, which have overtaken cocaine in recent years as the top substances of abuse. Drug overdose deaths in Connecticut increased by 76 percent from 1999 to 2013, and jumped by over 25 percent from 2014 to 2015, with drug-induced death being the leading cause of injury-related death in the state.

Officials say Connecticut’s struggles with addiction stem mainly from the overprescribing of painkillers. The cities of Hartford, Newbury, and New Haven have the highest rates of drug overdose deaths, since painkiller users often turn to heroin and fentanyl when painkillers become too difficult to obtain.

One of Arizona’s top struggles as it relates to addiction is being unable to provide treatment to those who need it. Arizona ranks fourth in the percentage of adults who need but are unable to receive addiction treatment. Heroin, painkillers, and other prescription drugs including benzodiazepines are responsible for the majority of drug overdoses that take place in Arizona.

Seventy-five percent of all heroin addiction cases in Arizona begin with prescription opioid abuse. Heroin-related deaths increased by 44 percent from 2013 to 2014, while deaths caused by opioids and benzodiazepines increased by 16 percent during the same time period.

Arizona recently declared opioid addiction a public health emergency as the epidemic caused 790 deaths across the state in 2016. In an effort to counter the epidemic, Arizona is expanding access to opioid overdose reversal medications and addiction treatments, and developing new opioid prescribing guidelines for doctors and pharmacists. 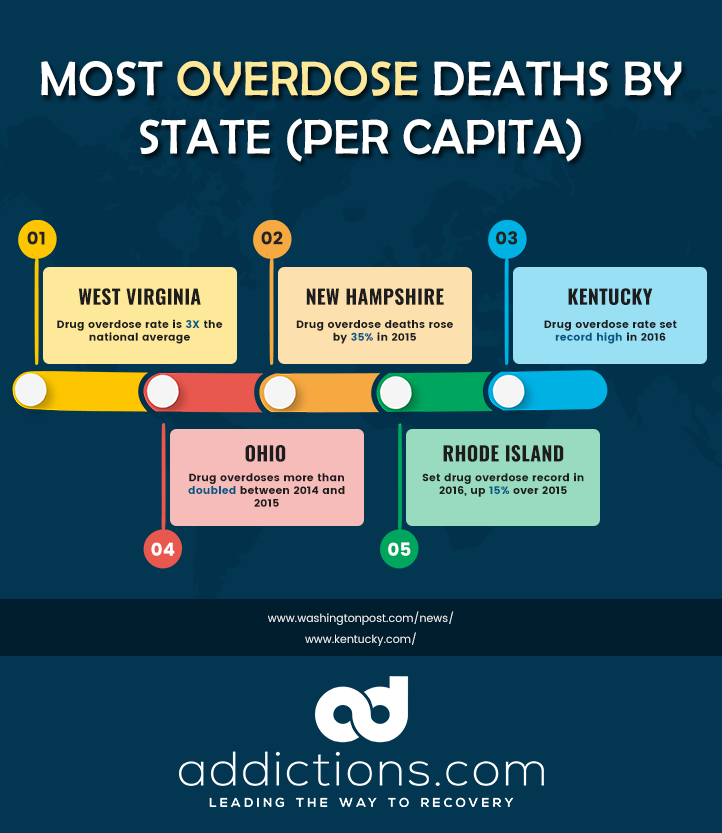 Heroin and painkiller use cause more overdose deaths than any other drug in Massachusetts. Opioid-related deaths were four times higher in 2015 than in 2000, with more than half of all admissions to addiction treatment centers related to opioid abuse. In 2015, roughly one in six Massachusetts residents obtained opioid prescriptions from their doctors, and were able to fill an average of three prescriptions.

Fentanyl is the state’s top concern when it comes to opioid use, since the substance was related to more than 60 percent of drug overdose deaths in 2015. During the previous year, fentanyl was associated with roughly 40 percent of drug overdose deaths. Many deaths caused by fentanyl in Massachusetts are unintentional, since users are unaware the substance is being mixed or cut into heroin and can trigger an overdose after just one use.

Massachusetts ranks fifth among states with the highest percentage of adults who are unable to receive treatment for substance abuse. The state recently received nearly $12 million in federal funding to expand access to addiction treatments and prevention efforts to reduce drug use across local communities.

While the state may be home to America’s car capital, Michigan loses more people to drug overdose deaths than to auto-related accidents. Drug overdose deaths increased by over 13 percent in Michigan from 2014 to 2015, and are mainly being driven by heroin and painkiller use — specifically fentanyl. The top three drugs abused in Michigan are heroin, painkillers, and cocaine.

Michigan officials say the state’s opioid addiction problem is largely due to the overprescribing  of painkillers — especially since its prescription drug monitoring system hasn’t been updated in nearly a decade. This makes it difficult for physicians and prescribers to determine whether patients already have valid opioid prescriptions, or are at risk for addiction. The state governor says Michigan needs to update its prescription drug monitoring system to reduce overdose deaths and curb the epidemic.

Experts say Michigan is also struggling with substance abuse due to the state’s high unemployment rates and economic challenges. Residents are increasingly turning to drugs and alcohol in an effort to cope with stress, depression, and other problems stemming from the recession. Like many other states in this list, Michigan was also provided $16 million from the federal government to expand access to opioid addiction treatment.

How America is Helping its Most Drug-Addicted States

The federal government recently issed grants to each state to help the nation combat drug abuse — specifically opioid addiction. Some states received more funding than others, based on existing resources, treatment facilities, and opioid overdose statistics. These funds will mainly be used to improve prescription drug monitoring programs, and expand access to addiction treatments and prevention efforts.

Drug rehab centers offers treatments that can help those who suffer from substance abuse overcome addiction as a whole. Detox treatments help patients overcome chemical dependency, while counseling, support groups, and similar therapies address underlying psychological causes of addiction. Addiction treatments are often customized for each individual patient based on the severity of their addiction and the substance being used. 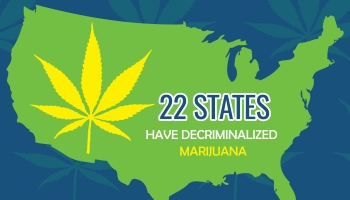 A Heated Debate: Is Drug Legalization the Answer? 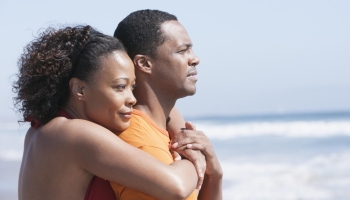 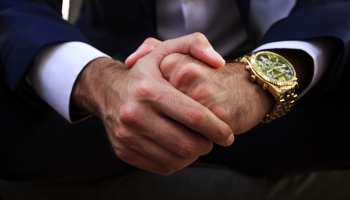 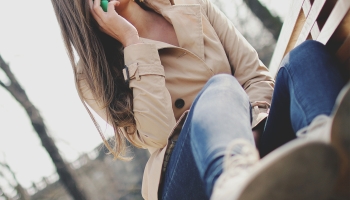 What is an Addiction Hotline and How can it Help Me? 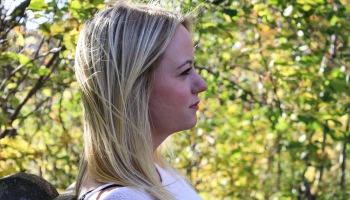