More oftentimes than not, excess indulgence in most any activity or pursuit causes problems in a person’s life. While excess in and of itself is not necessarily a bad thing, it’s how a person responds (or doesn’t respond) to developing problems that determines how destructive the activity may be. Playing video games can provide an easy and fun way to unwind or get away from the real world. It’s when video games become more important than the real world that a person has a problem. 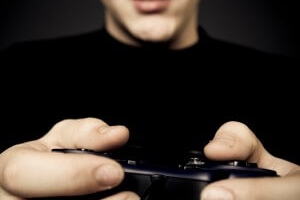 When a person is addicted to video games they tend to ignore many important aspects of their life.

Video game addiction symptoms may appear gradually as a person spends increasing amounts of time playing games. In the process, a person spends less and less time taking part in activities he or she used to enjoy, especially physical or outdoor activities. As gaming schedules start to take over a person’s life, poor sleep habits start to develop. In terms of dietary habits, fast convenient foods that can be eaten while gaming start to become the bulk of a person’s diet.

Over time, health-related video game addiction symptoms begin to deplete a person’s energy levels and ability to concentrate. In this condition, school or job performance will start to decline. Missed deadlines, showing up late, missing days at school or work start to happen more and more the longer the addiction persists.

As video game addictions typically consume large amounts of time, time spent maintaining family and friend relationships can’t help but decrease in the process. Much like addictions to drugs and alcohol, video game addiction symptoms become a source of conflict with others. The “rush” of playing games becomes a driving force all its own that can actually alter a person’s sense of time. In effect, a person may not even realize the loss of time, missed engagements and get-togethers that were once a source of enjoyment.

For people who rarely spend time with others, the online world of gaming only works to increase their state of isolation and addiction. Interactions had online in the gaming world begin to replace what little face-to-face, human interaction a person used to have.

The trademark compulsive behaviors that go with all addictions is no less an issue when it comes to video game addiction symptoms. Long periods of time spent in isolation begin to affect the way a person thinks and feels about life in general. After a while conditions, such as depression, social anxiety and low self-esteem start to develop.

This is especially the case for people who already suffer from psychological disorders like depression and anxiety. Continued isolation only works to worsen the symptoms of these conditions. In turn, a vicious cycle unfolds as video game addiction symptoms thrive off of depression/anxiety symptoms and vice versa.