Nicotine is one of the most widely abused substances in the world, accounting for millions of cases of addiction and an equally large number of deaths each year. This legal substance is commonly smoked or chewed to produce stimulant effects that last for up to ten minutes followed by an intense crash that results in the user’s desire to wash and repeat the process over and over. Nicotine withdrawal symptoms are the most commonly touted reason for people to continue to smoke or chew tobacco long after they have realized how serious such use is. 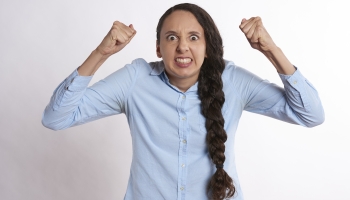 When quitting tobacco products, it is not uncommon for people to feel anxious or angry for a short time.

According to SmokeFree.gov, when you stop smoking, your body must adjust to life without nicotine and this can lead to an array of uncomfortable withdrawal symptoms including anxiety. The feelings of anxiety are strongest in the first few hours or days following the elimination of nicotine from your daily habit; these feelings gradually subside in time or with medically managed care.

Anger, hostility and an inability to control ones emotions are all common nicotine withdrawal symptoms. Medications can help to curb cravings or reduce the level of frustration that comes with the desire to quit smoking as can counseling and therapy if anger is too erratic or out of control.

Healthline notes that in addition to the disastrous effects that nicotine can have on one’s physical health, nicotine withdrawal is often responsible for depression and general feelings of sadness. According to Healthline, “as a rule, people who have smoked for a longer period of time and those who smoke at a higher volume will have the greatest likelihood of nicotine withdrawal symptoms.” This includes depression, anger, hostility, anxiety and other side effects.

Cancer.gov notes that although people who are feeling the symptoms of nicotine withdrawal may be restless, there are some steps that ex-smokers can take to reduce the stress and restlessness that they are feeling. They recommend avoiding “triggers” such as moods, feelings, places or things in your daily life that turn on your desire to smoke. To reduce restlessness, take up a new hobby or find something that you can do to reduce your angst and to stop thinking about smoking or chewing tobacco.

One of the most common nicotine withdrawal symptoms that isn’t easy to spot right away but that will creep up on you is weight gain. People who quit smoking often gain at least 10 pounds of the following year due to changes in their eating habits, sleep patterns and exercising patterns. Weight gain often results from making dietary changes in an effort to counteract the feeling of loss when there is no nicotine.