Whether online or offline, computer video games are designed to keep users immersed and engaged in play for as long as possible. Some people make the most of their time spent gaming and then get on with their lives. Other people may become so immersed and engaged in computer games that real life becomes less and less important. When this happens, a computer games addiction may be at work.

Unlike drug and alcohol addictions where an actual substance becomes the obsession, the act or process of playing a video game becomes the obsession. People who gravitate towards addiction often have other problem issues going on their lives. In the case of computer games addiction, computer gaming may fill an otherwise unmet void or need in a person’s life. Recognizing the signs of computer games addiction can go a long way towards regaining control over a potentially serious problem. 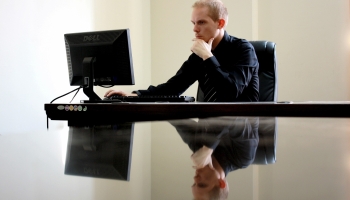 An addiction to computer games can cause a decline in work performance.

Most every type of addiction involves a substance or activity that alters a person’s brain chemistry and overall behavior. With substance-based addictions, the substance triggers these changes. With process-based addictions, the act or process of engaging in a particular activity triggers changes. In both cases, the chemical changes taking place in the brain reinforce the experience and ultimately, a person’s ongoing behavior.

According to Semel Institute, people affected by computer games addiction have developed a compulsive need that drives them to engage in the activity. Over time, this compulsion comes at the expense of their mental, physical, financial and social wellbeing.

Computer games enable a person to channel unexpressed emotions into an enjoyable activity. In effect, a person uses computer games as a way to self-medicate symptoms of depression and/or anxiety caused by an underlying, co-occurring condition.

Signs of computer games addiction all stem from a person’s compulsive need to engage in the activity. Ultimately, he or she loses control over the amount of time spent gaming.

Common warning signs of a gaming addiction include: